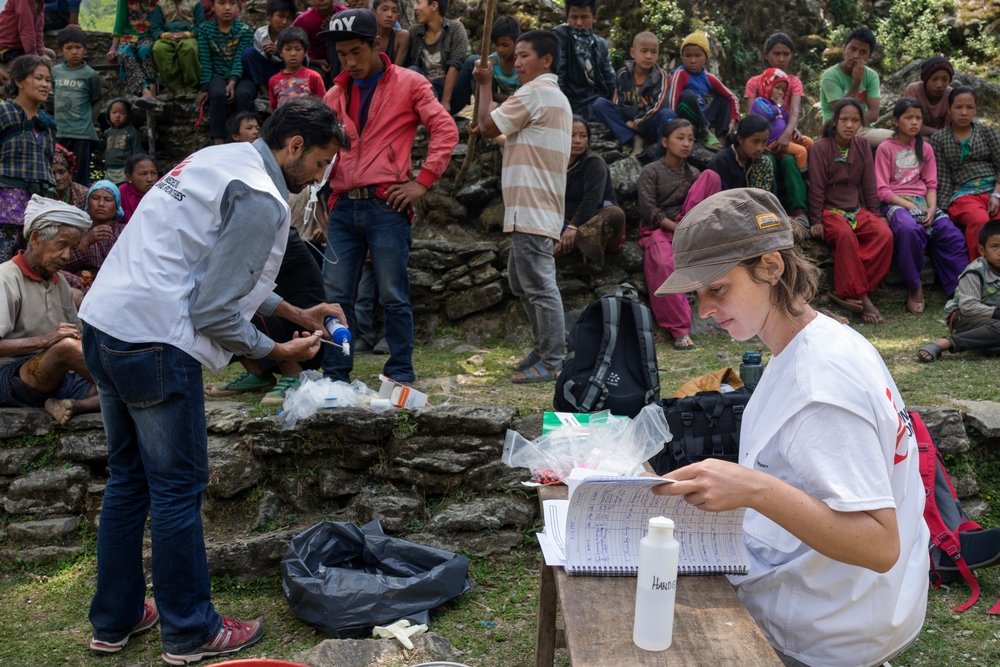 Three months after two earthquakes killed an estimated 8,500 people and injured another 20,000 in Nepal, Doctors Without Borders (MSF) is reducing its operations.

The international medical humanitarian organisation will nonetheless continue monitoring for disease outbreaks in several remaining displaced peoples camps, and conducting surgical and post-operative support in hospitals where needs have been identified.

48 hours after the first earthquake hit on 25th April, MSF teams had already arrived in Kathmandu and conducted assessments by helicopter. Others had reached Gorkha, the epicentre of the tremor northwest of Kathmandu, by road from northern India.

They found a huge local response already underway and accordingly chose to dedicate their efforts to hard-to-reach mountain communities. Efforts redoubled following the second earthquake, this time with an epicentre east of Kathmandu between Dolakha and Sindhupalchowk districts.

In total, MSF conducted over 2,500 health consultations and provided psychological support to over 7,000 people mostly via helicopter. MSF also treated 240 emergency patients and did over 1,200 physiotherapy sessions in the Kathmandu orthopaedic hospital. The humanitarian organisation also distributed food, and shelter, cooking and hygiene items to almost 15,000 households.

Shelter before the monsoons
With many remote villages utterly flattened, the impending monsoon season made shelter distribution and sanitation work both a priority and a race against time.

MSF transported close to 6,000 family-sized tents, as well as almost 13,000 iron sheets and 3,000 reconstruction kits to rebuild more permanent dwellings, into the mountains by both land and air. By the time the monsoons hit, almost 10,000 households spread across Dhading, Nuwakot, Dolakha, Gorhka, and elsewhere in the Budhy Gandaki valley had received shelter.

Health needs in the mountains

Medical assistance was critical in the immediate aftermath of the earthquake. While air evacuations from the mountains were organised by military helicopter for the most seriously injured on an impressive scale, others with conditions deemed not immediately life-threatening remained trapped in their villages and unable to access help.

Further, some hospitals were too damaged to treat those that were able to access them.

MSF ran a system of helicopter clinics to provide healthcare access and hospital referral in case of emergency.

Regular clinics were conducted in villages spread across Gorkha, Dhading, Nuwakot, Rasuwa, Sindhupalchowk and Dolakha districts. Their focus, in accordance with the needs expressed by the communities reached, was children under 5, pregnant women, and mental healthcare.

3 colleagues lost in a helicopter crash

During a clinic on 2nd June, three of our colleagues and their pilot lost their lives in a helicopter crash. MSF staff Sandeep Mahat, Jessica Wilford, and Sher Bahadur Karki (Raj), and their pilot Subek Shrestha, were flying back to Kathmandu after delivering assistance to villages in Sindhupalchowk district when the accident occurred.

It is with great sadness that we bid them farewell. May they rest in peace.

In the days following the first earthquake, a surgical team worked in Bhaktapur hospital to reduce the backlog of wounded awaiting treatment.

On 3rd May, MSF set up a temporary tented clinic in the area of Chhapchet, in Dhading district, an area heavily affected by the first earthquake. The clinic provided basic healthcare and minor surgical interventions, including for patients with wounds that had become infected.

In Arughat, Gorkha district, MSF set up a 20-bed inflatable hospital on 8th May with an operating theatre, emergency room, maternity and resuscitation room.

This replaced the destroyed local healthcare centre until the Ministry of Health was able to open a semi-permanent structure at the end of June.

MSF also provided technical support to a field hospital run by the Ministry of Health in Bidur, Nuwakot.
​​

Ongoing support
In May MSF also began supporting the Nepal Orthopedic Hospital in Kathmandu due to the high number of wounded being evacuated there. The organisation will continue providing post-operative care comprising medical care, physiotherapy and psycho-social assistance until the end of July.

MSF will also carry on supporting the surgical department of Charikot hospital in Dolakha district – the epicentre of the second earthquake – for three months.

Another team will support the Spinal Injury Rehabilitation Centre in Dhulikhel, to the east of Kathmandu, again for three months. That team will provide extra capacity for post-operative follow up of patients injured in the earthquakes. This includes physiotherapy, dressings, mental health and medical follow up.

Displaced in Kathmandu
Despite the focus on reaching those trapped in remote areas, MSF also set up water supply systems for 7,000 displaced people in Cheechipathi camp in Kathmandu, and created sanitation systems in a number of other camps spread around the city.

MSF will remain in the capital until the end of the monsoon season to monitor for disease outbreaks alongside the Ministry of Health in this camp and two others, as thousands of people there are still living in close proximity and in precarious conditions.

Find out more about MSF's work in Nepal.