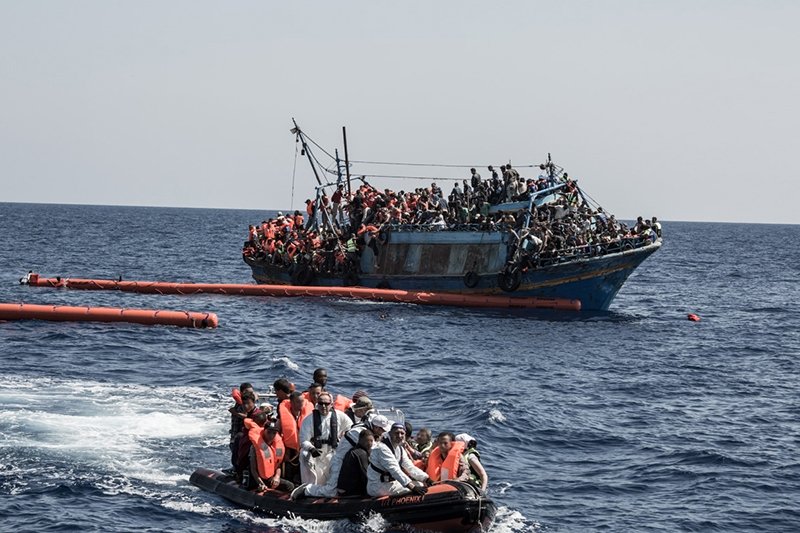 In the past 100 days, MSF has contributed significant resources to saving lives on the Mediterranean Sea and has rescued 11,482 people at risk of drowning through its search and rescue operations onboard the Bourbon Argos, Dignity I and MY Phoenix (the latter operated in partnership with MOAS).

Since operations began on 2 May, MSF has encountered many boats dangerously close to sinking, where lives have only been saved because the rescue boat was in the right place at the right time.

MSF’s rescue data shows that almost all rescues occur in two main areas off the Libyan coast near Tripoli and Zuwara. The search and rescue vessels operated by MSF and MOAS focus their entire attention on patrolling these waters proactively, with the sole mission of rescuing people from boats in distress.

This is not the case for many other vessels involved in search and rescue efforts which have other mandates to fulfil and are not stationed in this area unless specifically called upon for an operation by the Maritime Rescue Coordination Centre (MRCC).

In 2014, commercial vessels carried out 40% of all rescues, but recent attacks on commercial ships off the Libyan coast have meant that captains are now reluctant to enter this area for security reasons.

“Increasingly, we see that we are required to carry out multiple rescues from multiple boats within a matter of hours”, said Lindis Hurum, MSF Emergency Coordinator on board of the Bourbon Argos.

“Our teams have also encountered boats with people who had already died from dehydration or asphyxiation during the journey.

To me, this suggests that despite the EU response supposedly being ‘bigger and better’ than last year, there are not enough boats available and in the right spot to adequately respond to the needs of those crossing the Mediterranean.”

“People drown in seconds” adds Will Turner, MSF Emergency Coordinator on board of the MY Phoenix.

“In order to save the most lives, boats need to be focused solely on search and rescue, and be stationed as close to the North African coast as possible. It’s not enough to be waiting for a call in the waters between Sicily and Malta; search and rescue must be done proactively.”

The majority of people that MSF has rescued are from countries like Eritrea, Somalia, Syria, Bangladesh, Sudan and the Gambia, fleeing wars and oppressive regimes or seeking a better life in Europe.

The MSF medics have treated them for a range of conditions ranging from less serious conditions through to gunshot wounds, engine oil- and fuel burns, and organ failure.

“Search and rescue operations save many lives, but no matter how many rescue boats operate in the Mediterranean Sea, crossing in an overloaded wooden fishing boat or inflatable dinghy will never be safe,” said Lindis Hurum.

“To stop the needless deaths, the European Union needs to create safe and legal ways for people to reach Europe so that they don’t need to get in these boats in the first place.”

“When I ask people why they risk their lives in this way, I get the same answer every time,” says Will Turner. “There is no alternative. These people know the dangers but they take the gamble anyway. They tell us that they would rather drown seeking safety and freedom than stay in their homelands or in Libya where their lives are not worth living.”

In the words of Zachariah, an elderly Palestinian man displaced across borders for the third time in his life - most recently by the insecurity in Libya: “When the situation in Libya worsened, I decided to take my family to Europe but without documents, it was impossible to leave. We have all come this way because we have no other option”.

August is expected to be the busiest month on the Mediterranean, as calm seas and warm weather make for the best conditions for crossing.

“For many people in Europe, August is the holiday season, a month of well-deserved time off, ”said PaulaFarias, MSF Emergency Coordinator on board of the Dignity I.

“But for many people around the world, it's another month of fleeing war, deprivation, danger, hunger and oppression. Nobody risks their life on the Mediterranean for a bigger TV screen".

MSF will continue search and rescue operations on the Mediterranean in the coming months, working to best support those making the dangerous journey across the sea.

Find out more about MSF's projects in Mediterranean-migration