TB Summit: What you need to know

The UN High-Level Meeting on Tuberculosis:

World leaders will meet in New York on 26 September 2018 for the first ever UN High-Level Meeting (HLM) on TB. Ahead of the summit, Doctors Without Borders (MSF) joins others in calling on governments to make firm commitments to close the deadly gaps in TB testing, treatment and prevention. To save lives, governments must pledge to scale up use of the tools we have to tackle TB today – and commit to developing and delivering faster, safer and simpler tools for tomorrow.

An ancient and deadly disease

People continue to lose their lives to TB because they can’t access treatment, or because the treatment they need simply doesn’t exist at all.

Governments have a responsibility to rapidly scale up the use of improved TB diagnostic, treatment and prevention tools that are already available. A growing body of evidence shows that treatment regimens containing the newer DR-TB drugs bedaquiline and/or delamanid are more beneficial to patients than standard regimens.[4],[5],[6] However, these medicines remained inaccessible to almost 90% of people who were eligible to receive them in 2017. New World Health Organisation (WHO) recommendations released in August 2018 prioritise the use of oral drugs, including bedaquiline.6 Expanding access to safer, more effective, injection-free treatment regimens will improve treatment outcomes and prevent the needless suffering that often results from older treatments.

Research and development for tomorrow

The 2015 “End TB”[7] goals endorsed by WHO Member States to reduce TB deaths and new infections cannot be met unless improved treatment regimens, fast and simple diagnostics and effective vaccines are developed. Although governments also committed to support and intensify TB R&D, current funding is extremely insufficient. There is an estimated $1.3 billion per year funding gap[8].

Governments have a collective responsibility to mobilize the TB research community and to immediately and significantly increase TB R&D funding for affordable new treatments, diagnostics and vaccines. Action is needed to expedite the development and delivery of:

Governments have a collective responsibility to create an enabling environment[*] and support novel collaborative research models that guarantee a better public return on public investment. Action is needed to ensure researchers and developers: 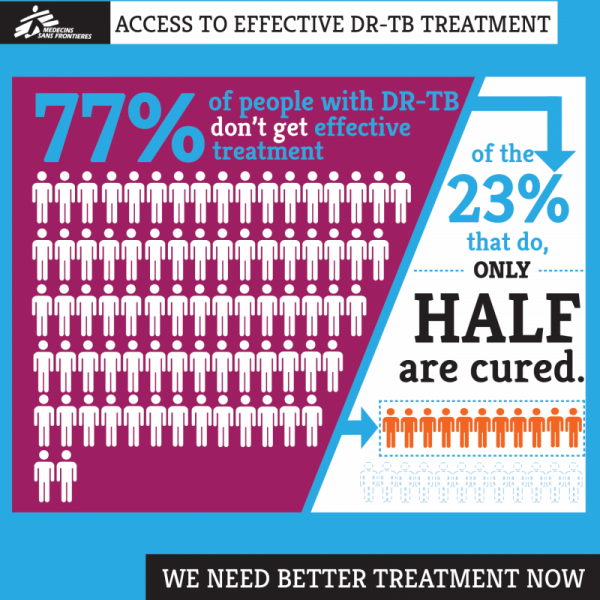 What needs to happen during the UN High-Level Meeting on TB?

In order to fight TB, government leaders need to show up. MSF joins numerous patient and civil society organisations in calling for the attendance of governments and heads of state at the HLM and for continued engagement following the summit.

During the summit, MSF urges governments to:

MSF is the largest non-governmental provider of DR-TB treatment worldwide. MSF is involved in research for new, shorter and more effective drug regimens, conducting both clinical trials and observational research in some of its DR-TB treatment projects.

[*] For example, through supporting initiatives such as the BRICS TB R&D Network, the G20 AMR R&D Collaboration Hub, and the Life Prize.

South Africa: A new revolution in TB treatment as the injection falls