Medical and psychological support for teenagers with HIV

Despite the medical progress, teenagers living with HIV continue to face a raft of challenges.

Adolescence can be difficult. Being an HIV-positive adolescent is even more difficult. From a medical point of view, life has become easier for those living with HIV, thanks to modern antiretroviral therapy (ART).

However, stigma is still a major problem, including for children and young adults. Poverty can also be a distinct obstacle for younger people trying to adhere to treatment.

Whether infected through unprotected sex; or perinatally via their mother during pregnancy, birth or breastfeeding, adolescents need extra support.

Girls face a greater risk than young men of transmission of HIV. Girls are physiologically more susceptible, but also more prone to the coercion and force that may be involved in unprotected sex.

Adolescence is thus a crucial time to intervene to both prevent and treat HIV, to keep HIV-positive girls alive and to reduce new infections amongst their peers—also, to prevent their newborns from becoming HIV positive, via prevention of mother-to-child transmission (PMTCT).

Girls here have an early sexual debut and they feel they don’t have a right to insist on protected sex. Most schools do not encourage discussions around reproductive health.

It is not really a component in the Kenyan curriculum so they either have to get this ‘education’ from their peers or, if they’re able, from the internet, which could be wrong information.”

“Early sexual activity means the girls are at a risk of getting pregnant and infected with HIV at an early age, so we give them information on PMTCT.

Peer educators, people who have already undergone PMTCT, are valuable in promoting its importance. Then for those who test positive, some have to seek permission from their husbands to start on ARVs, if they can handle disclosing their condition in the first place.” 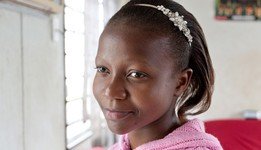 Eunice is also aware that mothers aged 10–19 can easily get embarrassed when put beside other women almost the same age as their own mothers, a barrier to addressing their needs in a standard healthcare context.

For adolescents who acquired HIV perinatally, some will learn early and others much later about their disease. This sudden disclosure can rock their world as they make their way toward adulthood.

Some HIV-positive teenagers are afraid that if they disclose their status, dating may no longer be an option, or friendships may begin to disappear. Others are often not properly informed about their disease as the parents are afraid of the stigma.

MSF emphasises psychosocial support to help overcome stigma and isolation and to help young people with HIV look to the future.

The adolescent support groups in MSF’s Epworth project in Zimbabwe are one example of a safe haven for HIV-positive girls, and boys, to interact and share their experiences.

Counselling is also vital to help younger patients stay on therapy, their many pills a daily marker of their positive status. Without support, many either refuse the medication or take it irregularly. But this leads to poorer health outcomes and likely drug resistance.

Nineteen-year-old Quinter describes the challenges she faces as an HIV-positive woman. “The challenge I face most presently is a lack of enough food.

I met my husband during my regular visits to the MSF clinic and we do manual work but this is dependent on availability—the work can be scarce. And when I get casual work like doing laundry for other people, I get so busy and pre-occupied that I forget to take my medication.

But, MSF has helped me keep my daughters healthy as they are all negative. I have been counselled and I feel strong, otherwise, I think I could have died by now.”

Flooding in Malawi: “This time around, the destruction is more of houses and farm produce”