Heavy rains in the eastern part of Southern Africa lead to flooding in the area of the Limpopo River last week. At this point, the situation seems most critical in Mozambique, as large areas of Gaza province remain inundated by the Limpopo River and its subsidiaries. An institutional alert was issued on 22nd January. According to official figures, approximately 240,000 people were affected, 146,000 of them displaced to almost 30 temporary shelters and 48 people have died as of January 28. 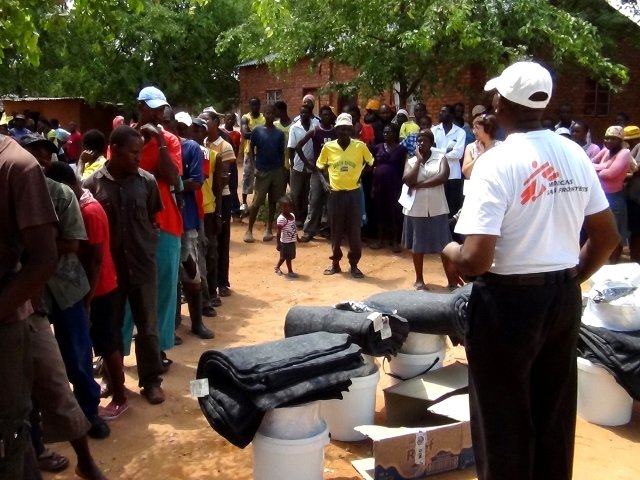 On Monday, MSF has started a joint explo to some of the areas where the situation is most severe, Chokwe, Guija and Xai Xai, in the South of the country. In Chokwe, although the water is starting to withdraw, about 114.00 people are staying in 10 transitional shelters. Yesterday, an MSF team assessed the largest shelter in Chiaquelane (approx. 50.000 displaced). The biggest concerns in the camp are linked to the sanitation situation, as there are only 60 latrines as of now. The two health facilities in the area report stock outs of drugs and malaria rapid tests and attend to about 300 patients a day. There is no ambulance for referrals and the main hospital lacks staff and equipment.

Overall, only 6 of the 23 health facilities in Chokwe districts are functional; most medicines and consumables have been destroyed by the flood and resupply is difficult many streets are still cut off. Though there seems to be a supply of ARVs, this situation may affect care for people living with HIV, as there are currently no consultations and Gaza province having the highest prevalence of HIV/AIDS in the country. The MSF team will start out patient activities for returning residents at the hospital as of this afternoon, reinforced by three medical staff from the Ministry of Health (MiSau). A second team is preparing to arrive in Chokwe tomorrow to ensure the provision of health care until MiSau can fully resume its services. This will free up the first team to assess situation in the northern part of Guija district, where pockets of people are still completely isolated. Another team is based in the provincial capital Xai Xai to participate in coordinating activities with relevant authorities until tomorrow.

In the southern region of Malawi, three different districts Phalombe, Mangochi and Nsanje have also been impacted by flooding since early January. In Phalombe and Mangochi, thousands of families were displaced and are now living in camps, often set up in primary schools. Some areas that were affected were practically unreachable by road so assistance was difficult. In Nsanje, where MSF also runs a HIV mentorship programme, many households have been seriously affected. MSF helped to improve the hygiene and water situation in the camps by constructing temporary toilets and showers, repairing broken water access points and doing hygiene sensitisation while empowering the local Village Civil Protection Committees to do ensure the cleanliness of the facilities. Additionally, non-food items (NFIs) such as soap, buckets, blankets and mosquito nets were distributed to the displaced populations. MSF teams helped to improve the local health services by donating drug supplies to the local community health worker, known in Malawi as a HSA (Health Surveillance Assistant). The number of daily patient visits done by the HSA, which are almost entirely for children under 5 years, have more than tripled with diarrhea and fever being the primary complaints. The intervention is ending next week after MSF finishes the NFI distribution and helps disinfect several boreholes which were contaminated during the flooding. MSF will continue to monitor the situation in the camps as it is still raining, the people have yet to return to their homes to being reconstruction and it is unknown for how long the people will remain displaced.

Due to the overflowing of the Limpopo River, about 800 people were evacuated in Musina, South Africa, early last week. MSF set up a mobile clinic for the first two days of the crisis to ensure access to medical care for affected population at Dongola ranch, as well as at the Musina Showgrounds, where people found temporary refugee. On Sunday, MSF participated with the Red Cross, UNHCR and IOM in a humanitarian donation to migrant farm workers in Kayemayema farm, where MSF runs PHC/HIV/TB mobile clinic. Some farm workers lost their liveihoods, when 50 mud houses were washed away. The donation, including hygiene packages and other non food, was rather small but helped affected people get back on their feet and restore their dignity. The crisis was declared over on January 24. Overall authorities reacted well and communities did a major job to help the affected population by cooking food and sharing other items.

In Zimbabwe, in Beitbridge and Tsholothso, MSF teams did several assessments in different villages together with the Ministry of Health in order to evaluate the consequences of the heavy rains in the area. For the time being, the authorities and other actors are coping well with the needs of the population and MSF only did a small distribution of blankets and buckets in Pumula village, Tsholotsho, and two days of water trucking to Beitbridge hospital and another clinic. However, MSF teams are following the situation closely, with a special focus in medical surveillance, and are ready to respond if necessary.

“The town of Chokwe gives the impression of a post-war scenery, as the big majority of the population has been evacuated to temporary shelters, mainly in Chaquelane. In  the city center, there are obvious issues related to sanitation and public hygiene because of dirty stagnant water and the presence of dead animals on the streets.” Lucas Molfino, Medical Coordinator for MSF in Mozambique.

“The two days we offered mobile clinics in Musina, we only saw about 10 patients. Nevertheless, our presence made a difference – if only on an individual level. Our first patient was a pregnant woman, just minutes away from delivery. We put her in an ambulance with our doctor and transferred her quickly to Musina hospital. She gave birth to a boy, literally minutes after arriving.” Andrew Mews, MSF Head of Mission for South Africa and Lesotho.

Flooding in Malawi: “This time around, the destruction is more of houses and farm produce”