Casualty numbers in Syria’s besieged East Ghouta enclave are soaring beyond imagination as the capacity to provide healthcare is in its final throes, said the international medical humanitarian organization Doctors Without Borders (MSF) today.

Hospitals and clinics supported by MSF had seen more than 3,700 wounded and more than 700dead after just five days of intense bombing and shelling – from evening of Sunday 18 February to evening of Sunday 25 February, certainly an under-estimate the number of facilities who managed to report is decreasing and as many facilities in the area that MSF does not support have also received wounded and dead. Many of these are women and children.

On Friday 23 February, women and children represented 58 percent of the wounded and 48 percent of the deceased recorded by the 9 MSF-supported facilities that managed to report.

Over the same period 13 medical facilities, fully or partially supported by MSF, have been hit by bombs or shells. Medics in East Ghouta who were already pushed to the brink have been working now for six days straight, without a break, with no realistic hope of being able to adequately treat their patients in such extreme circumstances. MSF calls for an immediate ceasefire to enable the basic human act of helping the sick and wounded.

Examples of what MSF-supported medics are telling us 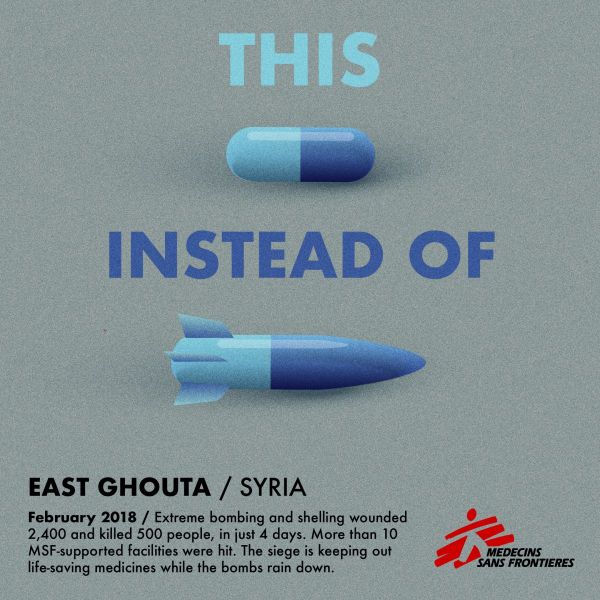 “As a nurse who has worked through extremely grim conflicts, I am devastated to hear doctors and nurses in East Ghouta saying they have 100 wounded patients and no hospital because it has just been reduced to rubble by bombing,” says Meinie Nicolai, General Director of MSF.

“There is a level of desperation and exhaustion that comes from working round the clock, finding no time to sleep, no time to eat, permanently surrounded by bombing, and simply being in the middle of absolute distress. Adrenaline can only keep you going for so long. If doctors and nurses collapse, humanity collapses. We must be determined to not let that happen.”

On the third day of this offensive, the medics that MSF supports were calling for increased medical supplies. Now, after six days of incessant bombardment, they are saying that even with supplies they would have no physical capacity left to keep treating the wounded, and they call for something else – for the bombing to just stop.

As the war in Syria has increased in intensity, the frequent calls by MSF and others to respect International Humanitarian Law (IHL) – the rules of war – have demonstrably fallen on deaf ears.

We will not abandon our calls for IHL to be respected, but we add now a specific plea: for the medics to be able to do their job the shelling and bombing by the Government of Syria and the armed opposition groups in East Ghouta must pause immediately, and we call on the supporters of these belligerents to use their influence to alleviate this extreme situation.

With high numbers of medical facilities hit and damaged or destroyed, with roads for transferring patients either impassable because of bomb-rubble or from fear of bombing, with medical supplies limited or entirely lacking, and with extraordinary numbers of patients and extraordinarily exhausted medics, a humanitarian response is urgently required.

MSF insists the following should be included in the response:

We call individually on the member states of the UN that are militarily engaged in Syria or are supporting warring parties in Syria to acknowledge their complicity in the unfolding medical catastrophe and to urgently exert their influence to alleviate this crisis.

Examples of what the MSF-supported medics are telling us

“Our medical point was bombed. We relocated to another place. That place also got bombed. That second time, the rescuers and others around the area rushed in to excavate people from under the rubble and that’s when a second bombing happened on that same spot, just when the people were all gathered there. We had around 100 people wounded and no working facility.”

“If you count the hundreds of bodies, the ones alive, and the ones dead; the body parts; there is nothing we can do for them. Even if we had enough supplies, there’s nothing we can do to answer to such a huge number of people. It’s not so much medical supplies that we need from you, but your help in stopping the bombing.”

“We cannot transfer any patients out of our hospital. Any person, on foot or in a car, in the streets, will surely die. We are even unable to refer patients that need intensive care to the Intensive Care Unit that is 5km away. We are obliged to keep them here, and here we do not have respiratory masks. We are resorting to the use of manual ventilators, and so each patient permanently needs somebody to operate that ventilator. With so many patients coming it’s impossible - we are losing so many patients because of the shortages we have. Patients would have a chance if we could refer them 5km to the ICU, but with the intensity of the bombing we can’t.”

“Our hospital is full, and we already got hit twice. When the patients started overflowing, we reassigned another location normally used as an outpatient clinic close to us. We are now using it just to have enough space to give whatever care we can to the patients. We are 250 people (between staff and patients) and we have nothing to eat.”

At the start of the recent escalation in fighting, MSF was providing a full package of regular support to 10 health facilities in East Ghouta and had been increasingly active in supplying other facilities with emergency medical donations. Even facilities that had not asked for MSF support for years were asking for help, and MSF was providing emergency donations to most hospitals and clinics in the area from its fast-depleting stocks in the area, but unable to supply some key items for surgery that were simply unavailable to anyone in East Ghouta. No MSF staff members are present in supported facilities.

Elsewhere, MSF directly operates five health facilities and three mobile clinic teams in northern Syria and has partnerships with five facilities. MSF also provides distance support to about 50 health facilities in areas of Syria where teams cannot be directly present, including in East Ghouta. Some of these are regularly supported and others receive emergency medical donations at times of dire need.

MSF's activities in Syria do not include areas controlled by the Islamic State group since no assurances about safety and impartiality have been obtained from their leadership, nor can MSF work in government-controlled areas since MSF's requests for permission to date have not resulted in any access. To ensure independence from political pressures, MSF receives no government funding for its work in Syria.

Syria: Situation in the northwest is quickly going from very bad to worse

Syria: MSF-supported hospital in Idlib closed after damage from airstrikes