Sexual violence: ever-present in and around displaced persons’ camps in Goma, DRC

In December, MSF treated 95 cases of sexual violence at the Mugunga III displaced persons’ camp. MSF denounces the lack of action on the part of those responsible for protecting civilians and the poor security conditions in the Goma camps. 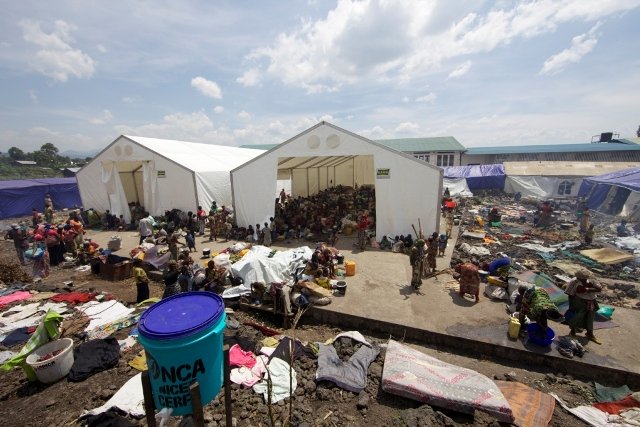 Between December 3, 2012 and January 5, 2013, the MSF team working in Mugunga III camp, a few kilometers west of Goma, registered and treated 95 patients who were victims of sexual violence. In late December, MSF teams noted an increase in admissions for trauma related directly to sexual violence, bringing the average daily number of medical consultations to six.

Despite the populations’ glaring vulnerability and the precarious living conditions in the camps, no one is providing adequate security for the displaced persons. “The camps and surrounding villages face a glaring lack of security,” says Thierry Goffeau, MSF head of mission in Goma. “The responsible authorities and the leaders of the various armed groups all claim – without exception – that they are defending the civilian populations. They must thus assume their responsibility and ensure that the most vulnerable are not subject to violence or reprisals.”

The heightened presence of soldiers and armed groups near the displaced persons’ camps has created a chronic state of insecurity in which rape is an everyday occurrence. “All parties to the conflict must pay greater attention to this problem of rape,” says Goffeau. “Given the frequency of sexual attacks, rape has become commonplace. The individuals responsible act with impunity and are rarely punished. At the same time, very few victims file charges because they are afraid of reprisals.”

Rape or death
“I went out to look for food in the fields,” says a displaced person and rape victim. “Two armed men in uniform appeared and told me that if I didn’t want to die, I would have to have sex with them.” Such statements are strikingly similar and all recount the same circumstances - attacks carried out close to the camps or in neighboring villages when women go out to seek wood or food.

In another common scenario, women are attacked inside the camp itself.  The scraps of wood and the plastic tarps used to create shelters do not provide adequate protection or deter the perpetrators.  “Violence is omnipresent,” says MSF psychologist Marie Jacob. “It is a violence based on power, the law of the strongest, the law of the person with a weapon."

More than 100,000 people have taken refuge in the displaced persons’ camps around Goma following last November’s fighting between rebel forces and government troops. MSF has been working in Mugunga III camp since late November and provides primary health care, organizes transfers for medical emergencies and treats victims of sexual violence. The organization is also working in the Lac Vert, Mugunga I and Bulenga camps, where the teams provide medical care, screen for and treat malnutrition, conduct measles vaccinations and build showers and latrines.