Amman - Doctors Without Borders (MSF) demands that the Syrian and allied governments stop the bombing of east Aleppo, provoking a bloodbath among civilians in the city.

On 28 September, just hours before the United Nations Security Council (UNSC) met to discuss the implementation of Resolution 2286 on the protection of medical facilities, two more MSF-supported hospitals were seriously damaged by bombing and went out of service.

“Bombs are raining from Syria-led coalition planes and the whole of east Aleppo has become a giant kill box. The Syrian government must stop the indiscriminate bombing; and Russia as an indispensable political and military ally of Syria, has the responsibility to exert the pressure to stop this,” says Xisco Villalonga, director of operations at MSF.

According to the Directorate of Health in east Aleppo, from 21 to 26 September, the few hospitals that are still functional in Aleppo reported receiving more than 822 wounded, including at least 221 children, and more than 278 dead - among which at least 96 were children.

“All intensive care units are full. Patients have to wait for others to die so they can be moved to an available bed in intensive care. We only have three operating theatres and yesterday alone we had to do more than 20 major abdominal surgeries,” says Dr Abu Waseem, manager of an MSF-supported trauma hospital in east Aleppo.

“The hospital staff is working up to 20 hours a day – they cannot just go home and let people die.”

The massive number of wounded is rapidly depleting the stocks in all hospitals. MSF succeeded in delivering a cargo of medical supplies into the city during the brief period where the siege was broken back in August, but has not been able to do so again.

“Over the last months, we have done everything we could to keep supporting the hospitals in Aleppo. Now, with a complete siege on the city, attacks on humanitarian convoys and intensive bombing, we are powerless,” says Villalonga.

The situation was already critical in east Aleppo before this renewed offensive.

MSF release a report today on the attack on Al Quds hospital in April 2016, which illustrates the daunting working conditions of hospitals in the city, and the brutal effects of the attacks on both hospital staff and on the access of the population to health services. 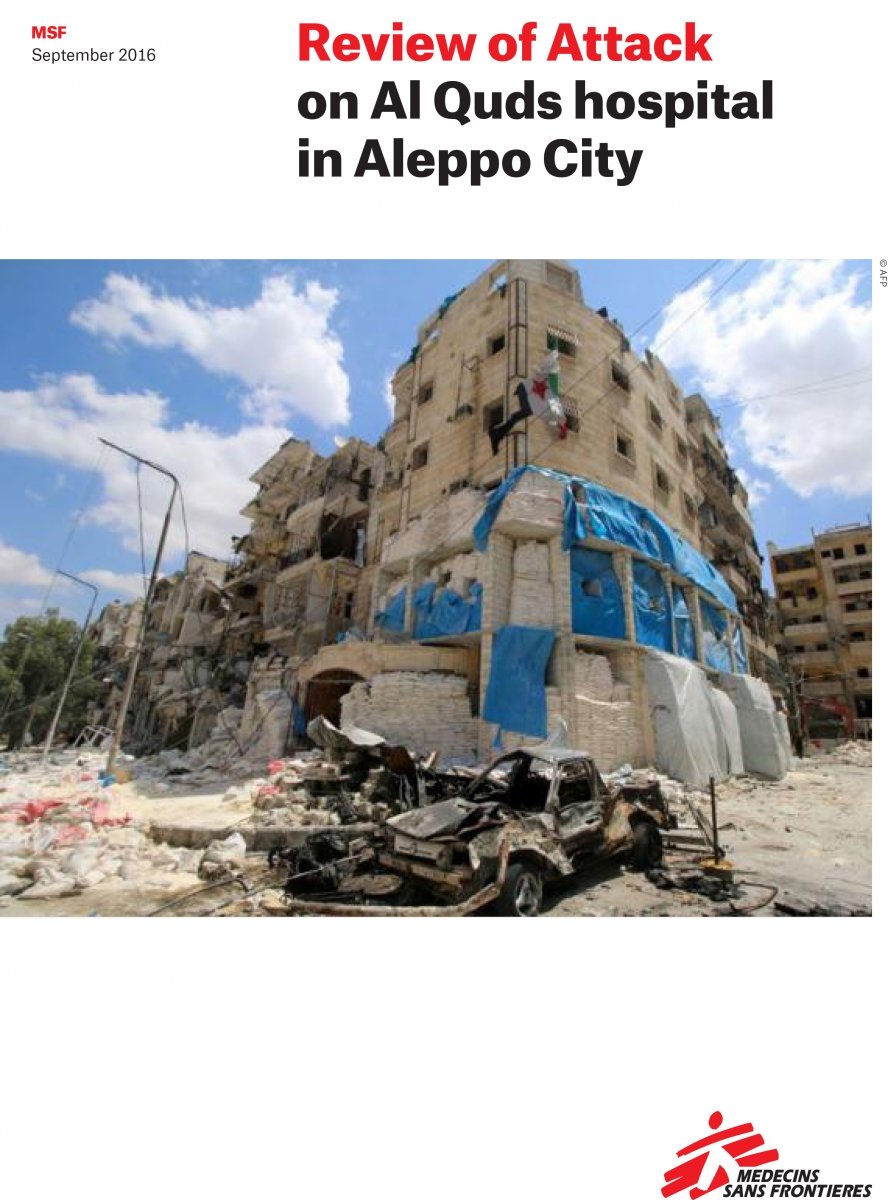 “In April, when Al Quds was bombed, it was the worst offensive to date. Yet, unimaginable limits have been surpassed since then and if this intensity of bombing continues, there may not be a single hospital standing in a few days,” Villalonga says.

“All hospitals in east Aleppo have been affected by the bombing since April. Al Quds hospital itself was hit and damaged again in August after intense efforts to rehabilitate the facility and resume activities.”

Medical facilities have also been damaged in west Aleppo in the last months.

“Russia and the other members of the UNSC must respect the resolution on the protection of medical facilities and put an end to the total disregard for humanity being displayed in Aleppo today,” says Villalonga.

“The ruthless, brutal bombing must stop and urgent measures need to be put in place to allow the evacuation of the severely sick and wounded to areas where they can access adequate medical care. Anything short of this is confirmation of what many are dreading, that the world has abandoned the people of Aleppo to a violent, agonising death.”

MSF supports eight hospitals in Aleppo. It runs six medical facilities across northern Syria and supports more than 150 health centres and hospitals across the country, many of them in besieged areas.