“Together we can kick TB out of Khayelitsha" 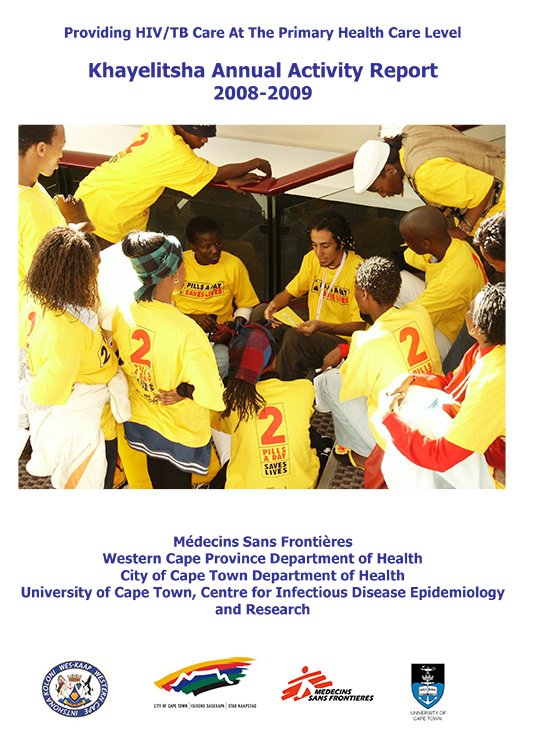 The newly approved ARV treatment guidelines include policy shifts that many activists had been fighting for years, including TB/HIV integration and other evidence based HIV treatment protocols such as using better tolerated tenofovir, decentralisation of service delivery to primary health care, nurse-initiated treatment, providing ARVs to all HIV-infected infants, pregnant women and people with TB with a CD4 count of less than 350.

A scale-up of this immensity will require the implementation of many of the lessons learnt in Khayelitsha, including task-shifting to nurse-led initiation of ARVs, full TB/HIV integration, and adherence clubs for patients on long-term ARV treatment.
Health partners Doctors Without Borders (MSF), the Treatment Action Campaign (TAC), the City of Cape Town, and the Western Cape Province Department of Health have shown through a cooperative project in Khayelitsha that decentralised integrated TB/HIV care results in improved outcomes. MSF opened the project in May 2001 offering ARVs. The Integration of ARVs within TB services in Khayelitsha (where approximately 70% of all TB patients are HIV positive) was another innovation that improved efficiency and clinical care. Previously, patients were referred from TB clinics
to distant ARV service points (and vice-versa), resulting in long waiting times and duplication of both clinical and laboratory investigations and medical records. Patients were also seen by different health care staff, which was a waste of resources and a confusion for patients.
“It is a matter of one patient with two diseases. There are different meanings of TB/HIV integration, but it is more than treating a patient for HIV and TB under one roof — it is about one clinic, one queue, one folder, one clerk, one nurse and one doctor, for both diseases in one patient. This is true integration and in many ways we are still striving for it” says Dr Gilles van Cutsem, Project Coordinator for MSF
Khayelitsha.
Integration of ARVs in TB clinics is also an incentive for TB patients to take an HIV test: Using an opt-out strategy in 2009, 96% of TB patients in Khayelitsha accepted to be tested for HIV. In addition, integration improves the diagnosis of smear negative TB, more common in HIV-positive patients and which traditional TB services are less equipped to do.
Enrolment on ARVs for TB patients was low prior to integration. In 2007, only 19 % of patients enrolled on ARVs were referred from TB services. The newly integrated Khayelitsha clinics show a radically different picture: a folder review in one clinic reveals that up to 68 % of patients enrolled on ARVs are on TB treatment. TB/HIV integration has shortened the time to initiation of TB treatment as well as of ARV
treatment in co-infected patients.
The nurse-based scale up of TB/HIV integrated ARV treatment in Khayelitsha has not jeopardised standard of care or patient outcomes. At 5 years on ARVs, 70 % of  people started on ARV treatment remain in care. “You cannot expect patients would have adhered to both treatment for HIV and TB if we did not integrate the care, making it easier for them. It is a waste of resources for your patient and your programme to do it any other way,” says Neliswa Nkwali, TB co-ordinator of the Khayelitsha Treatment Action Campaign branch.
While treatment outcomes for drug-sensitive tuberculosis are satisfactory in Khayelitsha, with 82% success rate and 76 % cure rate (2008), an increasing number of patients have been diagnosed with drug-resistant TB.
One of two pilot projects in South Africa is taking place in Khayelitsha to provide  treatment for drug-resistant tuberculosis (DR-TB) in clinics while patients live at home, rather than requiring hospitalisation away from family and friends for at least six months. The decentralisation of care for DR TB patients has resulted in greatly increased detection of DR TB. Close to 600 patients from Khayelitsha have been initiated on DR-TB treatment during the first three years of the programme. Given an estimated population of 500,000 people living in Khayelitsha, the DR-TB notification rate in Khayelitsha has increased from 23/100,000 in 2006 to 42/100,000 in 2008. This 82% increase is most likely a reflection of improved case detection rather than increasing incidence.
“We are convinced that if patients are treated in their local clinics while living at home, the case detection and treatment success will be improved greatly, provided that patients receive the support that is necessary for the long and difficult treatment of drug resistance. If all MDR patients have to be admitted to a drug-resistant hospital we’ll not have enough bed capacity and treatment initiation will be delayed. This means that patients are potentially transmitting DR-TB while waiting for admission.”, says Dr Virginia Azevedo, Khayelitsha Sub-district Manager for the City of Cape Town Health Department.
"The successful collaboration between partners produces an innovative model of care for TB/HIV services in one of the highest TB and HIV burden areas in South Africa and the world," said Dr Giovanni Perez, Director of Metro District Health System for the Eastern and Khayelitsha Sub-District of Western Cape Province.
For more information, see Khayelitsha Annual Activity Report 2008-2009
Contact:
MSF: Dr Gilles van Cutsem 082 3066 771 or Dr Cheryl McDermid 079 632 4810
Treatment Action Campaign: Neliswa Nkwali 078 211 0452
City of Cape Town Health Department: Dr Virginia Azevedo 083 629 3344