In northern Nigeria, marriage and pregnancy during the teenage years are the norms rather than the exception. Most girls are married by the age of 19, partly as an attempt to prevent pre-marital sexual activity. Yet in or out of wedlock, early pregnancies are often linked to serious risks for both mother and baby.

Médecins Sans Frontières’ obstetrics project in Jahun hospital, northern Nigeria, aims to reduce maternal and neonatal mortality through providing comprehensive emergency obstetric care and to improve women’s quality of life through surgical repair and rehabilitation for obstetric fistulas. The majority of patients, about 60%, are adolescents aged 15 to 19.

“Adolescent marriage and child-bearing are very common practices in Jahun and they contribute significantly to the high maternal and newborn mortality and morbidity in this region,” says Dr Amadou, activity manager for Médecins Sans Frontières’ project.

Common conditions seen among pregnant adolescent women in this region include anaemia, malaria and eclampsia. The team has also observed higher rates of miscarriage in this age group, with about 70% of all cases occurring in these women.

Young women are particularly susceptible to prolonged labour, likely due to the fact that their pelvis and birth canal have not fully developed. This can result in devastating outcomes such as the death in the newborn, or the development of an obstetric fistula in the mother. A fistula is a hole in the birth canal that can cause incontinence and subsequent social rejection.

Dr Tane Luna is a Médecins Sans Frontières women’s health advisor who recently worked as field obstetrician in Jahun. She saw many young women who suffered the consequences of prolonged labour and delayed obstetric care. 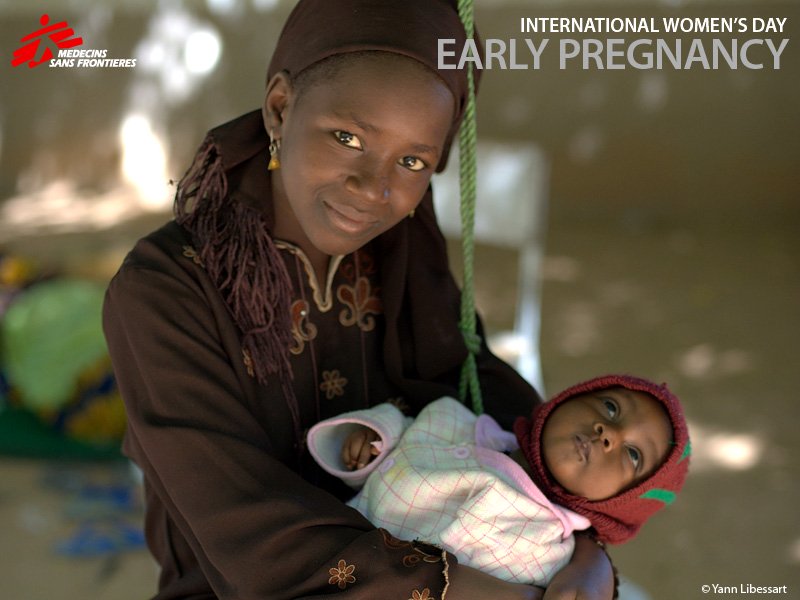 “The worst-case scenario is a teenage girl suffering prolonged labour, resulting in the baby’s death, fistula in the mother, and consequent rejection by her husband and community – all this before her 16th or 17th birthday. Sadly this was quite a typical situation.”

Many of the complications facing these young women are worsened because of delays seeking professional assistance with their delivery. There are numerous reasons for this, including the long distances to appropriate health services, financial constraints, and because traditional birth attendants are still more highly regarded than midwives.

Caroline Nyoni, head of nursing and midwifery activities at Jahun hospital, says there are also cultural barriers to seeking care.

“Socially, delivering at home means that you will be considered a very strong woman. People think that it is only the weak women who deliver at the clinic or hospital. Additionally, women generally are not the decision makers so their husbands or in-laws can refuse for them to go to the hospital or clinic,” she says.

Caroline recalls a 16-year-old girl who was recently brought into the clinic more than 15 days after giving birth. The girl had endured four days of labour at home, eventually delivering a dead baby. She was carried into the clinic by relatives as she had severe muscle wastage, as well as suffering a general infection, anaemia, malaria and other health problems. After four months of treatment, including intensive counselling, she was finally discharged.

“She needs a couple of years of further recovery before having another child. She’s been discharged to her parents’ home, and we need to counsel the husband about why they should wait before undertaking another pregnancy,” says Caroline.

MSF has worked in Jahun, Nigeria, since 2008 and currently sees 800 to 900 new patients each month. The project cares for women with obstetric emergencies and offers surgical repair of fistulas.

Borno State: The end of malaria season, and the need for functioning health infrastructure

On the run from violence in Nigeria