Every single last detail must be controlled when you organise mass vaccination campaigns such as the meningitis intervention that Doctors Without Borders (MSF) is currently undertaking in the northern Nigerian state of Yobe. Successfully vaccinating 136,000 people in a week, in remote areas and with temperatures exceeding 40 degrees Celsius, requires thinking even about the pens that one will need. The most delicate and essential part is maintaining the cold chain: that is, keeping the vaccines at a constant temperature of between 2 and 8 degrees. Otherwise, the vaccination loses its full effect.

From the time the vaccines leave Europe until vaccinators use them in the field, there is a long journey, in which dozens of people participate, and we need to ensure the material is supervised at all times. Once the vaccines are flown into the capital of Nigeria, Abuja, MSF officials organise a special reception at the customs office to prevent them from being retained for long. From there, they are transported in refrigerated trucks to a cold room in the Ministry of Health, where distribution to the basis of the state of Yobe is organised. 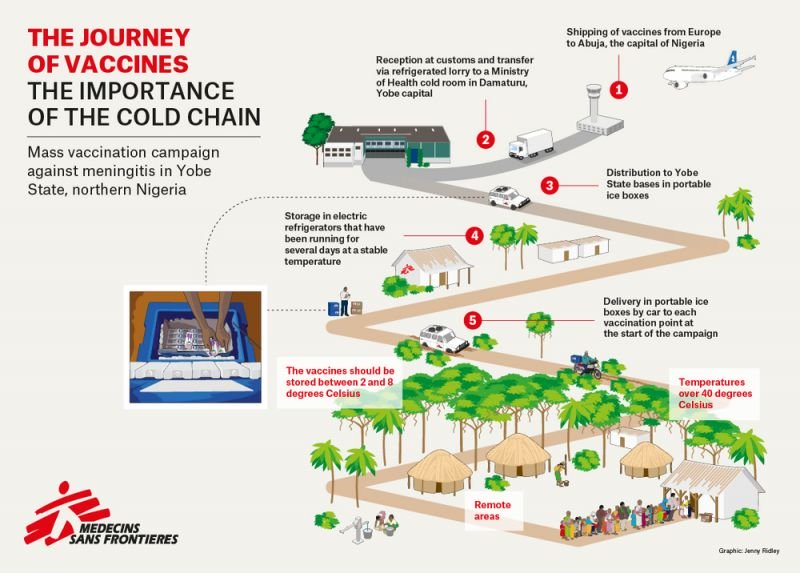 For this trip, we use portable coolers loaded with the necessary ice-packs to last for a journey of several hours by road. When the vaccines reach the operational bases, they are stored in electric fridges that have been operating for at least two or three days before and have a stable temperature. From there the teams coordinate the dispatch to the districts affected by the outbreak. Often electricity is a service that is not available or is scarce in the places where we launch these interventions. It implies always having generators, an electrical installation and enough space to have all this material at hand. Fuel is also required for the devices to operate 24 hours a day, which is not easy in non-urban contexts, affected by crises.

Choosing the right transport is not easy either. For example, air traffic to northern Nigeria is limited because MSF can only use the United Nations or Red Cross flights that arrive at the nearest airport in Maiduguri. They are small aircrafts that only allow light cargos. This forces us to transport the cargos to the bases in Yobe along main roads, which are in good condition and do not present security problems. However, the same does not apply at vaccination points. Some places are more than a two-hour drive from our bases and there is no other option than by car. We can’t risk walking because of the possible presence of members of the Boko Haram in the area. Our logisticians have to control the movements of the cars at all times as well as telecommunications by radio, mobile and satellite telephones.

Beyond all the logistical aspects of handling the cold chain, searching for cars and materials, houses, mattresses and even mosquito nets, MSF's efforts would be in vain if what is known as the microplan had not been developed: a detailed mapping of all the areas where we vaccinate. We need to know how far, up to the kilometre, the destinations are from the basis, the conditions of the routes, what happens if it rains or if it is sunny, the number of people who live in each place and the population type. This is fundamental, for example in Nigeria, where there are many fulanis, nomadic herding tribes, so awareness must be raised among the communities with enough time so that the day that the vaccination begins the beneficiary population is accessible. In the case of meningitis, the perception of the population is quite good because in general, they fear the disease, but it is not always the case. Some vaccines that require a painful injection can deter people and it is hard to persuade them to attend the following rotations.

No matter how much all the technical details are controlled and the vaccination teams are trained, unforeseen events can always arise. A road closed off for hours. A warning of an attack forcing us to suspend the gathering of people for the vaccination. We have also found situations where teams who wanted to go faster took the refrigerators without the vaccines in them, and two or three minutes after arriving at the destination they realised what had occurred. These are mistakes that can happen in a massive mobilisation involving more than fifty vehicles and teams; an intervention in which you even have to control up to the very last pen.

As an emergency organisation, MSF intervenes in cases of health or humanitarian emergency. In 2015 and 2016, MSF teams supported the Nigerien Ministry of Health’s response to the meningitis epidemic in the regions of Niamey, Zinder, Tahoua, Tillabéry and Dosso. During the 2016 epidemic there were 1,538 cases of meningitis reported between January and June, and of these 114 people died

MSF has been present in Niger since 1985 and currently works in the regions of Maradi, Tahoua, Zinder and Diffa providing paediatric and neonatology care, treatment for malnourished children under 5 years of age, immunisations, reproductive healthcare and support in the fight against malaria.

Find out more about MSF's activities in Niger and Nigeria.