Serbia - On the refugee trail: “My dream is peace in Afghanistan”

In the shade of the rusting tin roof of an old brick factory on the outskirts of the Serbian town of Subotica, close to the border with Hungary, a line of people is forming. They are waiting to see MSF’s team of doctors and nurses who are running a mobile clinic here since late 2014 for refugees and undocumented migrants.

People on the move

For months, the abandoned brick factory has been a place of rest for refugees on their way to the border crossing, further north. Many of the patients seen by MSF’s teams in Serbia are suffering from scabies and lice, skin infections, gastro-intestinal problems and muscular problems, often a result of the difficult living conditions that they have to endure while travelling from the Greek islands.

Everywhere there is evidence of people in a hurry. Clothes are scattered on the ground among cold ashes from fires. There are abandoned teddy bears, used plastic knives and other belongings that people have left behind. Unfolded cardboard boxes have been used as makeshift beds, and there are a few tents, some abandoned, others sheltering still-sleeping families.

This morning the sun is shining from a clear blue sky. The temperature is close to 30 degrees, although it is still early. There is a buzz of activity at the entrance to the factory grounds, where the only two water taps are located.

Standing in line near the van from where MSF runs its mobile clinic stands Haseeb, aged 13, from Kunduz in Afghanistan. He says he has had kidney problems in the past, and is experiencing stomach pains. He waits patiently with an Afghan friend until the nurse gestures to him to go behind the green tarp, where the MSF doctor and an interpreter await. 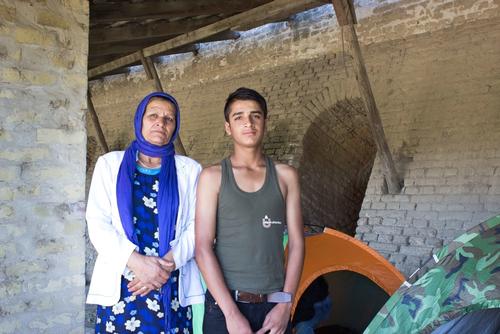 It is two months since Haseeb left Afghanistan with his mother, Zubida. Since then they have travelled through Pakistan, Iran and Turkey, then by boat to Greece and on to Macedonia and Serbia. Now they are waiting to cross into Hungary. It is the first time since they left Afghanistan that he has seen a doctor. Dehydrated and exhausted from the long journey, Tanya, the MSF nurse, gives him some pills for his stomach pains and advise him to drink plenty of water.

Dehydration and exhaustion are all too common amongst the people treated at MSF’s mobile clinics in Serbia. Along with conditions such as inflammation, broken bones, blisters and sprained ankles, these are the results of their harsh and stressful journeys.

Forced to stay away from school

Haseeb is one of 15 patients seen by the MSF team this morning. He used to go to school in Kunduz, until violence forced him to stay away from class and the school itself was bombed. Haseeb’s mother is a doctor. His father, a police officer, was killed by a suicide bomb four years ago. With violence and insecurity increasing, they decided to leave Kunduz, but Haseeb’s brother stayed behind. Haseeb says he misses his life in Kunduz. He misses going to school and he misses the rest of his family.

“My dream is peace in Afghanistan,” says Haseeb, “but I know that is not possible now. So we left to live somewhere without fighting.”

After his consultation with the MSF doctor, Haseeb shows us a scar on his right forearm. Smiling, he says that he cut himself while playing football back in Kunduz. The deep cut needed stitches, which he received at the hospital run by MSF in Kunduz. Haseeb dreams of playing football for his country. “We don’t have a good Afghan team,” he says. “I want to be like Cristiano Ronaldo.”

In addition to its activities in Subotica, MSF is also running mobile clinics in Belgrade where an increasing number of migrants are transiting. In June, medical activitites also started in Presevo,  near the border with FYROM.

Find out more about MSF's work in Serbia.

Refugee Crisis in Europe: "The determination of the refugees to reach their destination is shocking"