Chad at a risk of acute malnutrition

Chad: Plunging from one nutrition crisis to the next

With international attention focused on the displacement crisis in the Lake Chad area of western Chad, where tens of thousands of people continue to seek refuge from Boko Haram violence, another chronic emergency also continues. Chad is in the grip of malnutrition crises – not just in the Lake region and not for the first time. There are estimates that some 3.4 million people lack reliable access to food, with 495,000 children across the country at risk of acute malnutrition.*

For the fourth time in five years, medical teams from Doctors Without Borders (MSF) are responding to a nutrition crisis in Bokoro, in the Hadjer-Lamis region of central Chad. Since July, an MSF emergency team has treated more than 2,300 severely malnourished children in the area.

MSF launched its response in early June after discovering that alarming numbers of children in Bokoro were severely malnourished. An MSF team found that 5.5 percent of children under the age of five were suffering from severe acute malnutrition – more than twice the emergency threshold of 2 percent. This was at the very start of Chad’s annual ‘hunger gap’, a five-month period that usually lasts from June until end October.

“Providing feeding programmes and medical assistance to acutely malnourished children is essential, but it is simply not enough to stop hundreds of thousands of children across Chad repeatedly descending into emergency levels of malnutrition,” says Alberto Jodra, MSF head of mission in Chad.

“Far more needs to be done to address malnutrition’s multiple structural causes and to ease the suffering of communities like Bokoro from plunging from one hunger crisis to the next.”

MSF teams have set up outpatient therapeutic feeding programmes in 10 Ministry of Health clinics across Bokoro district. Since July, teams have treated 2,361 severely malnourished children during weekly medical consultations in health centres, while their parents collect supplies of special therapeutic food to continue their treatment at home.

Meanwhile, malnourished children with medical complications are transferred to an inpatient ward set up by MSF in the Ministry of Health hospital in Bokoro town, where 222 critically ill children have so far received lifesaving treatment.

“Although encouraging steps have been taken at national levels to address recurring malnutrition, the fact that we have launched an emergency response in Bokoro for the fourth time in five years shows that critical gaps exist between national policies and how they are put into practice,” says Jodra. 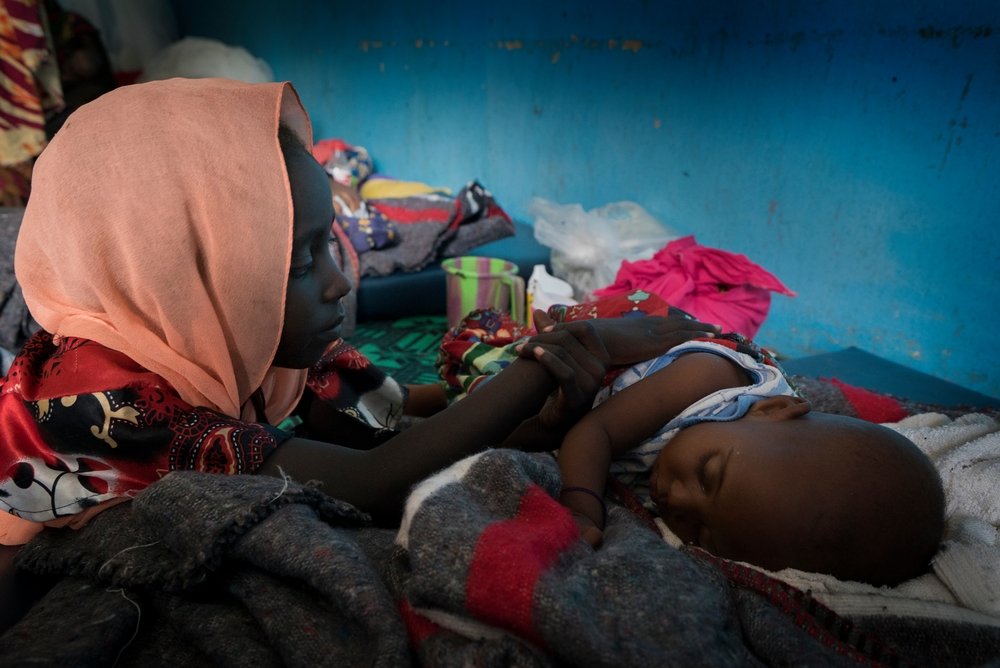 Located in the southernmost part of Chad’s arid Sahelian zone, Bokoro’s harsh climate means that harvests are small and there is little pasture on which animals can graze. As a result, food is scarce and children are at high risk of developing malnutrition. However, the complex causes of malnutrition in Chad go beyond climate and harvest-related factors.

Even outside the country’s Sahel area, where climate conditions are gentler and food more widely available, communities still have difficulties accessing enough nutritious food to eat. In Am Timan, a more fertile area in Chad’s south-eastern Salamat region, MSF has already treated more than 2,000 children for severe acute malnutrition this year, with half of these patients treated from June to September.

During Chad’s annual ‘hunger gap’ many people’s food supplies from the previous harvest run out. With poverty and unemployment compounding their difficulties, families struggle to survive, with many forced to limit their food intake or go into debt so as to eat.

Too often they become trapped in a vicious circle where their debts outstrip what they can hope to earn from next year’s harvest. This year, insecurity and violence around along Chad’s borders have also disrupted trade, which has negatively affected the fragile local economy and the availability of food.

Poor infant-feeding practices, bad poor sanitation, low levels of education and limited access to clean water also play a role in increasing the risk of malnutrition. On top of this, the poorly functioning health system, with its dire lack of financial resources, qualified staff and available services to prevent and treat malnutrition is also placing food-insecure communities in further danger of recurring nutrition emergencies.

Children under five are the most vulnerable to malnutrition. It weakens their immune systems, making them more susceptible to disease – a risk that increases in countries such as Chad, which regularly see disease outbreaks and which have low vaccination coverage. Overall in Bokoro, 29% of the severely malnourished children MSF treated between July and September also had malaria, while 30% had watery diarrhoea and 15% had respiratory tract infections. Because of this susceptibility to other illnesses, and low vaccination coverage, MSF teams have vaccinated 1,114 children against measles as part of  its feeding programme.

By November, the hunger gap should come to an end, as people in Bokoro harvest their fields once again. But even after the emergency phase of this response, underlying problems that lead to food insecurity and malnutrition will persist. Once the malnutrition peak is over, MSF will remain in the area to help address gaps in the healthcare system, one key cause of the recurring nutrition crises.

MSF teams will continue to support the Ministry of Health’s district’s health centres and to run malnutrition prevention activities. However, increased national and international efforts will also be vital if Chad’s recurring malnutrition crises are to end.

MSF has been working in Chad since 1981, and currently runs regular medical programmes in Abéché, Am Timan, Massakory and Moissala. In March 2015, MSF launched an emergency response for people displaced by Boko Haram violence in the Lake Chad region. In the capital, N'djamena, MSF also supported Ministry of Health hospitals following suicide bomb attacks that took place on 15 June and 11 July 2015. Since April this year, MSF has been training Ministry of Health staff on the management of mass casualties in order to increase their capacity to respond to emergency situations.

*Note. According to OCHA figures http://www.unocha.org/tchad/

Read more about our work in Chad

Niger: The dehumanising experience of exile