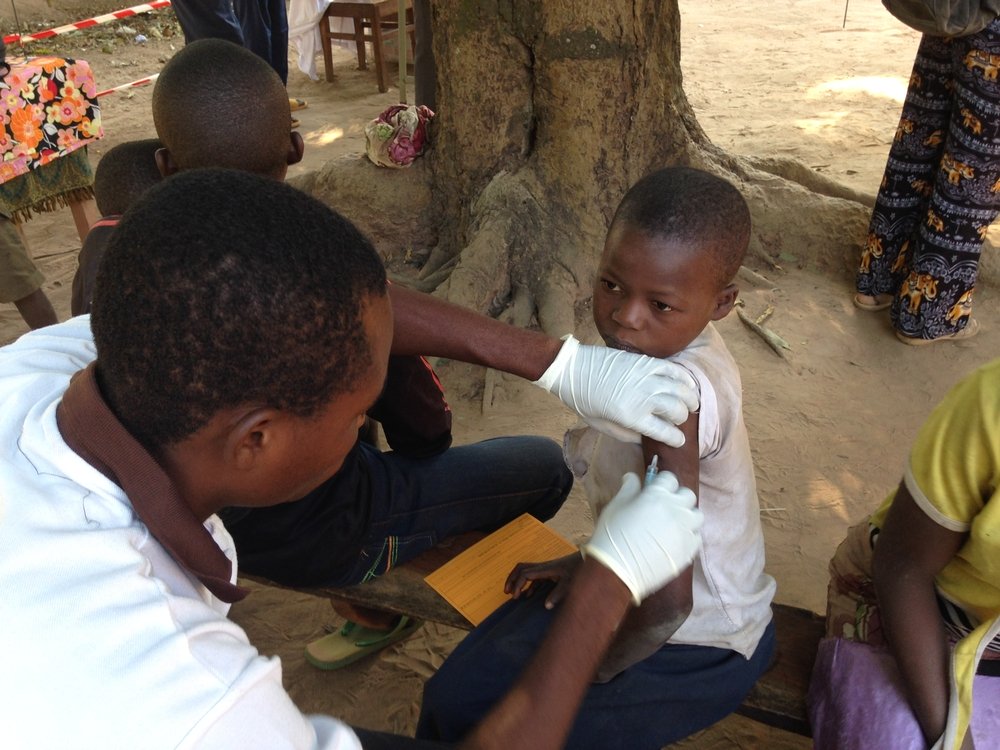 The worst measles epidemic since 2011 continues to ravage the province of Katanga in the South of the Democratic Republic of Congo (DRC) after first striking in March this year. While vaccinations have made this disease very rare in Western countries, it remains fatal for unprotected populations, especially children.

Tell us about this epidemic
“Measles is practically endemic in Katanga. A significant increase in cases was observed at the beginning of March 2015, mainly in the Malemba Nkulu health zone, so during April MSF carried out an evaluation of the situation.

This health zone, which is in the Haut-Lomami health district, has an estimated population of around 307,908. Confirmed new cases rose from 400 to 800 a week, and there was even one week when we recorded over 1,100 cases.

This is a huge epidemic, and the medical teams have had to deal with a massive influx of seriously ill patients. In the first week we recorded a mortality rate of almost 19% within the Measles Treatment Centre (MTC).

The reason was that the children being admitted with measles were also suffering from co-infections (respiratory diseases or neuro-malaria), so many were already very weakened by pathologies such as malnutrition or malaria. Luckily, we got the mortality rate down significantly in the second week, but it’s still very high.

What is MSF doing?
Between 20 April and 20 May we distributed backup supplies to 19 of the 23 health centres in the zone, which meant that over 4,000 patients who were straightforward cases were treated as out-patients.

We set up a referral system for the more complicated cases, transporting them by motorbike taxi to the Measles Treatment Centre (MTC) in Malemba. There they have 50 beds – 38 for in-patients and 12 for intensive care. In one month, Malemba MTC admitted 342 children, of whom 90% were under 5.

Lastly, since 20 May, we vaccinated all children in the Malemba Nkulu health zone aged between 6 months and 10 years – that’s a total of 101,000 children.

Currently one of our biggest challenges is to control the epidemic, which is still progressing in a dozen or so health zones that are very close to one another. The main issues are logistics, availability of human resources, and getting enough vaccine to protect almost 600,000 children.

What’s more, because these health zones are in geographical areas that are especially difficult to reach, this will also have an impact on how long it will take to complete the campaign.
We are adapting our operations as best we can, drawing on what we learned from the 2011 epidemic when we vaccinated almost 1.5 million children.

What are the problems you’re facing?
The roads in this region are sometimes impassable, there are a lot of marshy areas and we sometimes have to travel vast distances, so there are significant logistical issues – especially since it’s vital to maintain the cold chain for the vaccinations to be effective.

So we decided to prioritise the populations which are the easiest to get to. It’s still a huge challenge, because in the centre and the east of Katanga, 13 of the 68 health zones are dealing with epidemic outbreaks.

Altogether we’re talking about nearly 2.5 million people. Apart from the health authorities who are overwhelmed, very few medical organizations have got involved to help these authorities deal with this crisis.

A final factor that is making this measles epidemic worse, is the poor state of the population’s general health, with the youngest being particularly fragile; they’re already suffering from malnutrition, malaria and respiratory diseases, which pushes the mortality rate up and makes action all the more urgent.”

Find out more about MSF's work in the Democratic Republic of Congo.