Greece: Thousands of migrants and refugees blocked in precarious conditions at the border with Former Yugoslav Republic of Macedonia 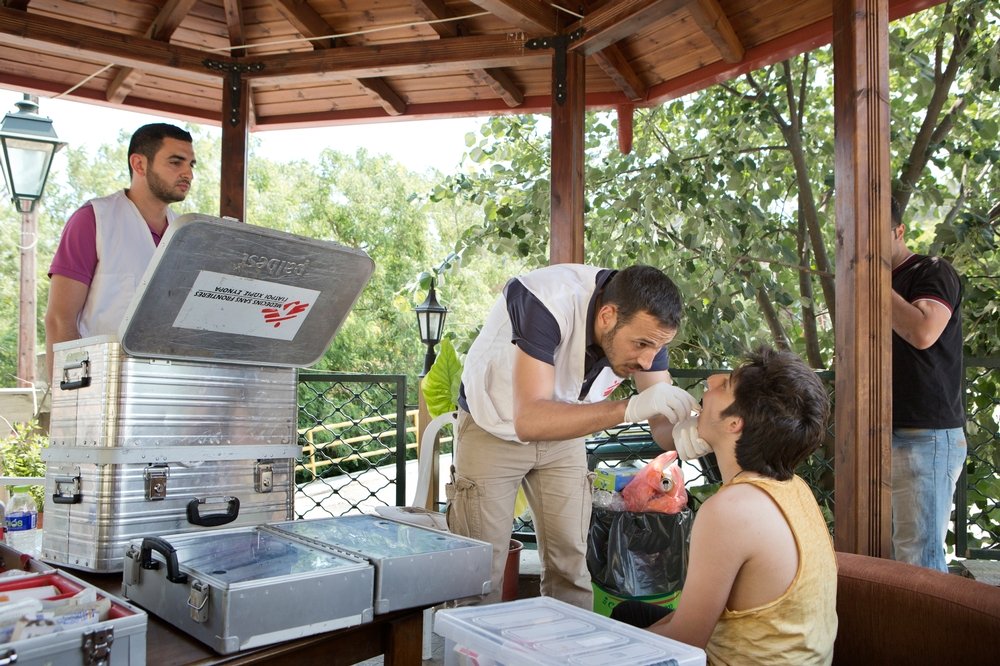 During the last week, the number of migrants and refugees stranded in the shrubby forests around the village of Idomeni on the border between Greece and The Former Yugoslav Republic of Macedonia (FYROM) increased tenfold.

Doctors Without Borders (MSF) has since April been offering medical consultations, psychological support and relief items, and is now planning to reinforce its activities in the area by launching an additional mobile team.

Due to a recent enhancement of border enforcement by the FYROM police and special forces, more than 2.000 people travelling towards northern Europe have found themselves blocked at Idomeni, and some are now attempting to cross at other border points.

Most of the people seen by MSF’s medical team are fleeing war and violence in Syria, Afghanistan and Iraq, with some of them considered to be particularly vulnerable, such as elderly or disabled people, pregnant women, and children under five years old. Many are living in squalid conditions, staying outside in the bush or at the train station, without any shelter, food or access to hygiene facilities.

“The situation will become much worse if more people get stranded in the area, because there are no basic facilities here and people are scared of what will happen to them.

Many are forced to take great risks in order to avoid being found, and sadly there have been several accidents across the border where people have died. It’s absurd how people who are fleeing war and violence are forced to risk their lives in order to finally reach safety in countries that are able to ensure their protection” says Antonis Rigas, MSF project coordinator in Idomeni.

MSF’s mobile medical teams have been visiting the area five days a week, offering medical consultations, psychological support and distribution of relief items such as blankets, energy bars and soap.

Over the last week, MSF has provided consultations to an average of 85 persons per day. MSF has also installed two water points.

The majority of the medical problems are respiratory tract infections, skin infections, muscle pains, gastro-intestinal diseases and can be linked to the living conditions during their journeys.

Many patients suffer from serious blisters and muscle pain from having to walk for more than 70 kilometers from the city of Thessaloniki, as they are refused access to public and private transportation to the border areas.

“Many of the people have suffered traumatic events in their home countries and have had to endure an exhausting and dangerous journey” says MSF psychologist Aggela Boletsi.

“In addition to this, people are now being pushed and shouted at by border officers, policemen are firing gun shots in the air to keep the people out, and we’ve even treated bruised patients who say they’ve been beaten by the border officers. Naturally, many people get scared when confronted with such a heavy-handed approach”.

To respond to the increased number of people in need of medical care and support, MSF will scale up its activities by launching a second mobile team in July, which will enable a continuous, seven-day a week presence in the Idomeni area.

Find out more of MSF's activities in Greece.

MSF launched a project in the Balkan region end of 2014 with the aim of providing assistance to migrants and refugees arriving from Turkey and crossing the Balkans in the hope of reaching western Europe.

Currently, two teams in Serbia and three teams in Greece are providing medical and psychological support as well as distributing essential relief items. The teams are based at  arrival points in the Greek islands and along the borders between Greece and FYROM, FYROM and Serbia and Serbia and Hungary.