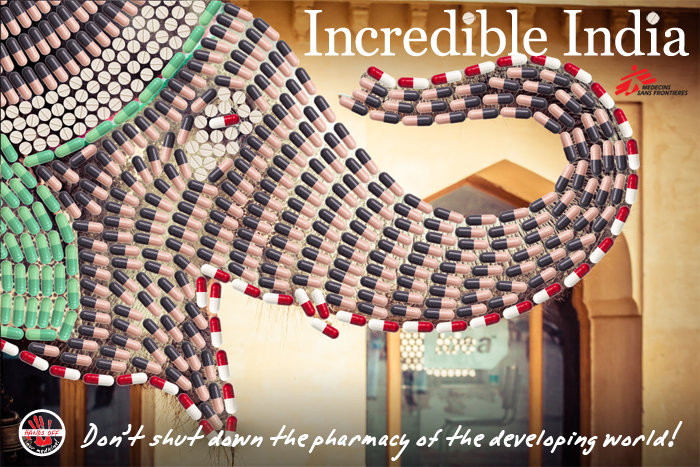 As Indian Prime Minister Narendra Modi prepares to address US Congress next week, the international medical humanitarian organisation Doctors Without Borders (MSF) is urging India—often called the ”pharmacy of the developing world” —to resist pressure from US lawmakers and the pharmaceutical industry and protect access to affordable medicines. Millions of people across the globe who rely on Indian low-cost quality generics are at risk of having their lifelines cut as pharmaceutical lobbying groups and US lawmakers aim to change India’s intellectual property (IP) policies to favour excessive pharmaceutical monopolies.

Despite the many failures of the patent-based innovation system that have led to the global crisis of high drug prices and just a handful of drugs being developed for neglected diseases like tuberculosis, which greatly affects India, the US ignores these failures and instead demands new, harmful intellectual property rules that worsen the situation. High drug prices, rather than funding innovation, actually divert government resources away from funding research and development that truly meets public health needs.

“It’s outrageous that the US is trying to export its broken intellectual property system to India—a system that has caused medicine prices to skyrocket, leaving patients empty-handed and patients and payers struggling to manage the cost of expensive patented medicines,” said Leena Menghaney, South Asia head of MSF's Access Campaign. “These policies, which are increasingly not working for people in the US, should not be forced on people living in India or anywhere else in the world.” Current US intellectual property laws enable pharmaceutical companies to charge exorbitant prices for medicines in the United States. It costs over $100,000 annually for new cancer medicines and up to $1,000 per pill for the new hepatitis C treatments.

India currently grants patents on pharmaceutical products, but sets the bar high as to what does and does not deserve a paten.  These policies encourage the development of new drugs over “evergreening,” a practice in which companies make minor modifications to existing medicines to extend their patent monopolies by additional years.  High patent standards are critical for protecting price-lowering competition and saving millions of lives across the world.

India freely produced generic treatments before 2005, when its membership in the World Trade Organization required it to start granting patents. In 2012, with people unable to afford a key cancer drug, India issued its first compulsory license, a tool used by governments to override a company’s patent to allow for generic competition. The compulsory license was issued to bring down the price of sorafenib tosylate, a kidney and liver cancer drug, by 97 percent and increase patient access.

Since then, the US government has increased pressure on India to increase IP enforcement and put a moratorium on compulsory licenses to ensure multinational pharmaceutical companies enjoy their monopolies without any checks for abuses. Earlier this year India was once again placed on the US Trade Representative (USTR)’s "Special 301" Report. Pressure has persisted through multiple others avenues of bilateral engagement on IP, including the existing US-India Trade Policy Forum and the creation of a new high-level IP working group announced jointly by President Obama and Prime Minister Modi in September 2014.

“By striking a balance between industrial production of generic drugs and the patent system, India’s policies have saved and improved millions of lives,” Menghaney said. “HIV regimens that were priced at $10,000 per patient per year 15 years ago now cost $100 per person—that’s a 99-percent reduction in price, thanks to generic competition in India.” MSF treats more than 200,000 people worldwide for HIV and 96 percent of antiretrovirals are quality, affordable generics from India. The organization also relies on generic medicines for tuberculosis, malaria and other infectious diseases.

Unfortunately, pharmaceutical companies’ interests are already getting in the way of care, said MSF. Modi’s visit comes a month after the Indian Patent Office granted US-based pharmaceutical company Gilead Sciences a patent for its hepatitis C drug sofosbuvir—a drug that studies show costs about $100 per 12-week treatment course to make but is sold for $1,000 per pill in the US. This decision is taking away a lifesaving treatment option for patients in many high burden middle-income countries. The patent was granted a little over a year after India initially rejected the patent, leading to increased pressure from the US to grant more patents to pharmaceutical companies. An appeal has been filed with the Delhi High Court.