The Ebola outbreak continues in the Equateur province, with one new laboratory-confirmed case from the city of Mbandaka, Democratic Republic of Congo which has a population of more than a million and is a busy port city located on the Congo River.

This new case is linked with the epicentre of the epidemic, the east of Lake Tumba. Since the beginning of the epidemic, 44 overall people who have presented symptoms of haemorrhagic fever, 3 confirmed as Ebola, and 23 deaths have been notified by the national health authorities in the region.

To tackle the epidemic and limit as much as possible the risk of it spreading, Doctors Without Borders (MSF) is stepping up its response in the affected areas (Mbandaka and Bikoro). 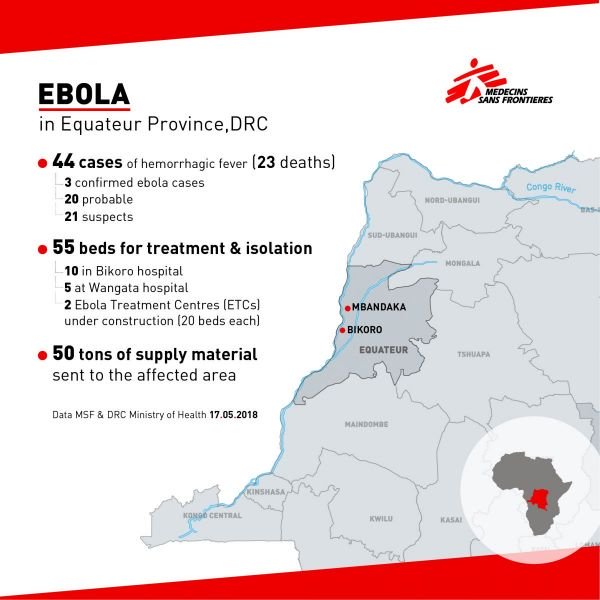 MSF Emergency teams are already on site and have set up an isolation zone in Mbandaka’s main hospital (5 beds) and one in Bikoro hospital (10 beds).

Among the MSF staff on the ground are some of the organisation’s most experienced Ebola field workers, including medical personnel, experts in infection control and logisticians.

“This is the ninth Ebola outbreak in Congo in the last 40 years. So far, all of them have occurred in remote and isolated areas, as was the case last year in Likati, when the epidemic didn’t spread., explains Henry Gray, MSF Emergency Coordinator in Mbandaka.

“With the new case confirmed in Mbandaka, the scenario has changed, and it has become most serious and worrying since the disease is now affecting an urban area. It is paramount to trace the suspect case in order to have a clearer view of how it reached the city.

We are working closely with the Ministry of Health and the other organizations in the field to implement a coordinated, tailored and rapid response to stop the spread of Ebola.”

The video below was recorded on Friday, 18th May.

Moreover, MSF and its research arm (Epicentre) are working closely with the Ministry of Health and the World Health Organization (WHO) on the implementation of the Ebola vaccine rVSVDG-ZEBOV-GP as an additional measure to control the outbreak.

Whilst the strategy is being put in place, the “pillars” of an Ebola intervention, that consist of early treatment and isolation of people who are sick, tracing and following up contacts, informing people about the disease, how to prevent it and where to seek care, supporting existing healthcare, and temporarily changing cultural behaviour around funerals must continue in order to stem the spread of the disease.

MSF has worked in DRC since 1981 and today has regular and emergency projects in 20 of the country’s 26 provinces, offering medical care to the victims of conflict and violence, to displaced

Palliative drugs are used to treat  Ebola symptoms (i.e. strong painkillers; anti-anxiety drugs; antibiotics), and they are part of the MSF “Ebola kit”

Find out more about MSF's work related to Ebola.