Transforming faces and lives of patients suffering from Noma in Nigeria

“Some people would run away when they saw my face,” says Bilya. “They didn’t consider me to be human.”

Bilya is a 20-year-old noma survivor and a patient at Sokoto Noma Hospital, in northwestern Nigeria.

The hospital, supported by Doctors Without Borders (MSF) since 2014, is the only facility in the country – and one of the few in the world – fully dedicated to treating this deadly bacterial disease.

Bilya got noma when he was just one year old. Quickly, the disease destroyed his nose and upper lip. He was lucky to survive, as nine out of ten people affected by noma die in the first two weeks.

It starts as an inflammation of the gums, similar to a small mouth ulcer. In just two weeks the infection starts to destroy bone and tissue, potentially affecting the jaw, lips, cheeks, nose or eyes, leaving survivors with physical consequences including pain, breathing complications and difficulties eating.

Parents usually have no idea what is happening to their child and time is their worst enemy. Although noma can be treated simply and effectively with antibiotics, too often it goes undiagnosed and the child dies.

Bilya survived, but was left with a severe facial disfigurement. As he grew older, he had to deal with the social stigma caused by his appearance.

Hover over this image for an interactive guide to our noma project. 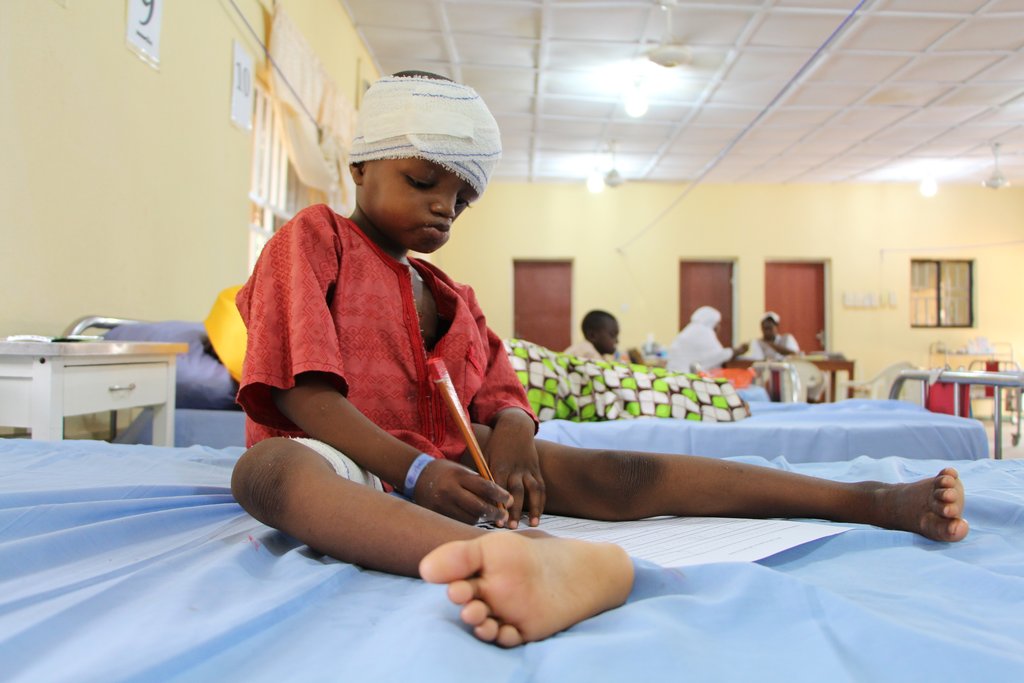 Bilya has come to Sokoto Noma Hospital to have reconstructive surgery on his face. Four times a year, a team of international surgeons, anaesthesiologists and nurses travel to Sokoto to operate on noma survivors.

The hospital, run in collaboration with the Nigerian Ministry of Health, also focuses on community outreach, active case finding in the region, health promotion and mental health support.

Like Bilya, Hadiza, aged 40, was infected as a child. She has spent most of her life hoping for the chance to have surgery to restore her face and her dignity.

“With noma, people will definitely look at you,” says Hadiza. “Even your brother will discriminate against you.”

At Sokoto Noma Hospital, Hadiza finally met other people with the same medical condition and got the opportunity to have reconstructive surgery.

Children with malnutrition, poor oral hygiene or suffering from childhood diseases such as measles are particularly susceptible to noma, as confirmed by recent research into the disease by MSF.

Having no access to healthcare is another risk factor, directly linked to the difficulties of detecting it early.

Generally, there is a lack of understanding around the disease’s causes and symptoms, which hinders its prevention and early detection, both of which are key in the fight against noma.

“Noma can be prevented by improving the living conditions of people at risk and raising awareness,” says Karla Bill, MSF health advisor for Nigeria.

“And it’s treatable with antibiotics if detected and managed early. But little is known about the disease, and more research and resources are urgently needed to investigate its causes, prevalence and risk factors.”

Umar, aged eight, from Sokoto, and Yaashe, aged six, from Borno, both survived noma, but by the time they were brought to Sokoto Noma Hospital, the disease had already destroyed half of their faces.

Both Umar and Yaashe underwent surgery, and are now recovering in the hospital. Soon they hope to return home with their families and start new lives that include playing with other children and living free from pain and stigma.

Find out more about noma and noma survivors.

“The humanitarian crisis in Northeast Nigeria is by no means over”

Nigeria: “I feel ashamed of relying on others to live”