Today, patient groups and other leading health organisations in South Africa have joined the Fix the Patent Laws campaign to push for reform of the country’s current patent laws that severely restrict access to affordable medicines for all people living in South Africa.
Together, they call on the government to urgently finalise a National Policy on Intellectual Property that champions measures to reduce prices and increase access to a wide range of medicines for people in need across South Africa.

The expanded coalition of organisations represents public and private sector patients in South Africa seeking treatment and care for a range of cancers, mental illnesses, diabetes, and other non-communicable diseases - as well as tuberculosis, HIV and sexual and reproductive health.

South Africa currently grants patents on almost every patent application it receives, allowing companies to maintain lengthy monopoly periods on medicines. This keeps prices of many medicines higher in South Africa than in many other countries. 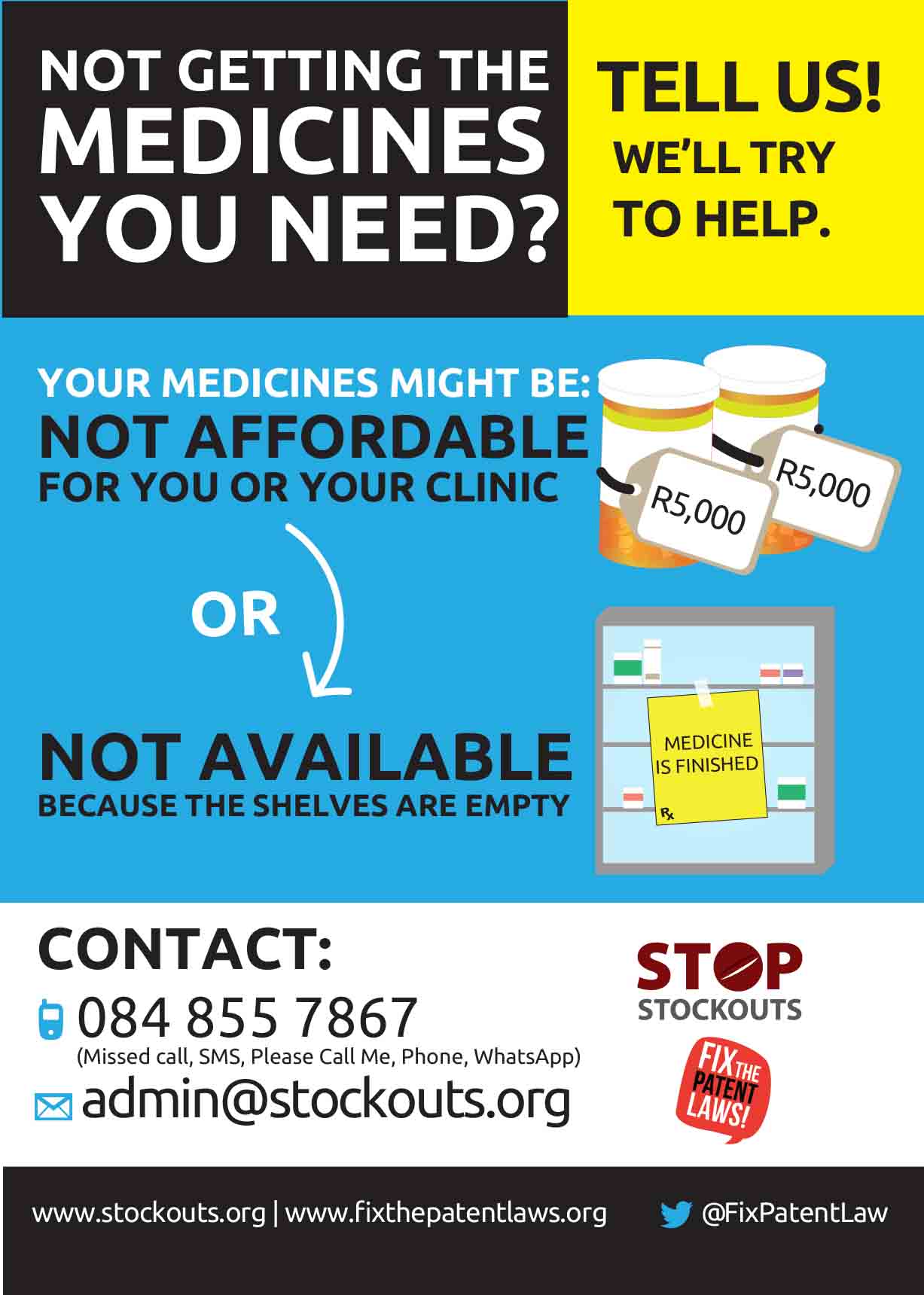 “Some cancer patients would rather go to other countries, like India, for treatment – the combined cost of the flight, medical services and drugs is cheaper than buying the drugs alone in South Africa,” Bernice Lass of cancer group, CanSurvive, pointed out.

“For patients, caregivers and their loved ones, going through cancer can be a devastating experience,” explained Magdalene Seguin of the Cancer Association of South Africa (CANSA). “CANSA is contacted on a regular basis by patients who don’t have access to medication due to the high cost. CANSA supports that patent legislation in South Africa is amended urgently to ensure access to new affordable and life-saving cancer medications.”

People Living with Cancer put its full weight behind the Fix the Patent Laws campaign because, as Linda Greeff explained, “we want to ensure that there is proper scrutiny of patent applications before patents are granted. We want a patent granting process that is ethical and transparent, so that more people can access the medicines that they need.”

Charlene Sunkel from the SA Federation for Mental Health stressed that “high medicine prices prevent mental health patients from accessing the medicines that they need – especially the new generation of medications which often have fewer side effects and cover a broader spectrum of symptoms.”

Cassey Chambers of the South African Depression and Anxiety Group explained: “We deal with patients every day who cannot afford medication or treatment, and as a result become more depressed, helpless, hopeless and even suicidal in some cases.”

DiabetesSA’s Keegan Hall stressed that as health organisations, “we have an obligation to take steps to improve affordability and access to medicines. The cost of insulin and other diabetes management tools are far too expensive for many patients,” Hall added.

Health organisations joining the Fix the Patent Laws campaign recognise the opportunity South Africa has to improve access to medicines for all diseases through reforming problematic patent laws.

The Department of Trade and Industry (DTI) has already embarked on the process of legislative reform, releasing a Draft National Policy on Intellectual Property for public comment in 2013. The draft policy contained important commitments to reform the laws in order to restore the balance between public and private interest, in favour of people’s health. Following the adoption of a finalised policy by Cabinet, bills to amend intellectual property legislation in South Africa will be brought before Parliament.

The expanded Fix the Patent Laws coalition calls for urgent approval of a finalised National Policy on Intellectual Property, as a critical first step toward reform of problematic patent laws and practices that deprive people living in South Africa of more affordable treatments for all conditions.

BACKGROUND:
The Fix the Patent Laws campaign was initiated by the Treatment Action Campaign (TAC) and Doctors Without Borders (MSF) in 2011. The campaign calls on the DTI to remedy shortcomings in South Africa’s current intellectual property legislation that allows for excessive patenting of medicines – at the expense of affordable access. It is estimated that 80% of patents granted in South Africa do not meet the country’s patentability criteria. This is largely due to the fact that patents are granted without substantive examination of applications to ensure that patentability criteria are met.

As a member of the World Trade Organisation (WTO), South Africa is required to uphold minimum standards of intellectual property protection as defined by the international Agreement on Trade Related Aspects of Intellectual Property Rights (TRIPS). This includes granting 20-year patents on medicines. However, South Africa also has significant flexibility under TRIPS to amend national legislation, in order to improve access to medicines. Reforms could include the government taking measures to limit abusive patents being granted on medicines. At the same time, the government could establish easier procedures for overcoming legitimate patent barriers, when medicines are unaffordable, unavailable, or not adapted for patient needs.

The Fix the Patent Laws coalition is calling on the Department of Trade and Industry to release a final version of the National Intellectual Policy, committing to the adoption of a number of key reforms within a reasonable timeframe. These reforms are detailed in a submission to the DTI by TAC, MSF and SECTION27 at: http://www.fixthepatentlaws.org/?p=764

More information on the campaign can be found at:
https://www.youtube.com/watch?v=TXppFbyoYws&feature=youtu.be
http://www.tac.org.za/publications/activist-guide-fix-patent-laws-campaign

Find  out more about MSF