MSF responds to a cholera outbreak in South Kivu, DRC

A recently declared cholera outbreak in South Kivu, Democratic Republic of Congo, threatens to spread out of control unless a full response is implemented, Doctors Without Borders (MSF) has warned. MSF teams are providing assistance in the towns of Minova, Bukavu, Bulengo, Numbi, Sebele, Nyange and Baraka, but prevention measures need to be put in place rapidly to contain the epidemic, including in the large towns of Minova and Bukavu. 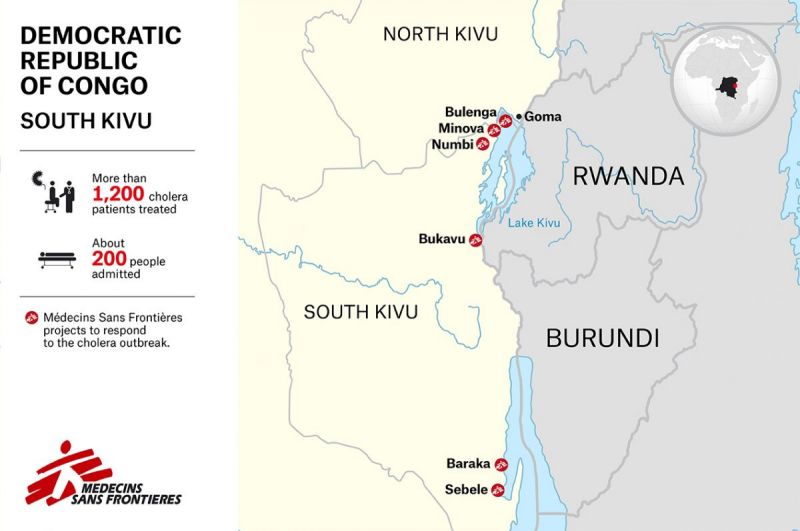 MSF is running four cholera treatment centres in Minova, Baraka, Sebele and Bukavu, and three treatment units in Bulengo, Nyange and Numbi. To ease the burden on the country’s Ministry of Health, MSF teams are treating the patients in these structures and have provided more beds and equipment to increase the response capacity of the different health structures.

Since August, more than 1,200 patients have been treated by MSF for cholera in the different centres. There are currently 70 people being treated in Minova, 67 in Bukavu, 18 in Bulengo, and 22 in Baraka.

In Baraka, MSF has installed nine chlorination points to disinfect water and has also donated materials to the centres in Kabeya, Ruzizi and Uvira. MSF has also assigned its most specialised personnel to the health structures to help manage the fight against the disease, in collaboration with the country’s Ministry of Health.

However, the response to prevent and stop the spread of the disease has so far not been effective.

“We need to set up many more chlorination points, disinfect the houses of sick people, and carry out an awareness campaign as soon as possible,” said Francisco Otero y Villar, MSF head of mission in the Democratic Republic of Congo (DRC).

In DRC, the dry season and a lack of water can force the population to get water from unhealthy sources, which fuels the spread of cholera. Many people in both Bukavu and Minova get their water from lakes or from other contaminated sources. Half of the cholera cases that have come to the Minova treatment centre are from a neighbourhood situated on the shores of Lake Kivu, which is not a source of clean water.

“People need to be provided with drinkable water, and health centres need to be equipped with the materials essential to treat everyone affected as quickly as possible”, explained Francisco Otero.

Find out more about MSF's activities in the Democratic Republic of Congo.

Democratic Republic of Congo: Addressing the double burden of COVID-19 in Kinshasa

200,000 people flee their homes as violence surges in northeast DRC