Stefan Kruger: "With Ebola there aren’t many experts in the world"

In 2014 and 2015, Ebola spread through several countries in West Africa, resulting in the largest outbreak of the disease the world had ever seen. MSF South African Doctor, Stefan Kruger, worked in Sierra Leone from July 2014 to help combat the spread of the disease. He shared blog posts from his time in the field. Read them below:

What do I know about Ebola? I’m just a doctor…

In the days leading up to the start of my first Ebola mission, I frantically wrack my brain for any and all knowledge I have on the lethal illness.

There are snippets of a medical school lecture entitled “Viral Haemorrhagic Fevers”. It is filed somewhere next to Haemochromatosis and Klippel-Feil syndrome, in a section of the brain labelled “things you are unlikely to need again after the exams”.

I remember beautifully detailed pictures taken under electron microscopes, I remember the class Filoviridae, and the name Peter Pyott seems to ring a bell. My go-to electronic medical reference has scanty information on clinical management, but copious notes on the identification of Bioterrorism.

It also states that “even a single case of Ebola or Marburg virus outside of Africa is a public health emergency”. As a South African, I find this rather offensive.

A sense of unease develops as messages pour in from well-meaning friends, saying “Be careful,” and “Don’t get sick.” My briefings at MSF headquarters are reassuring – with a disease that occurs as seldom as Ebola there aren’t many experts in the world.

I find comfort in the fact that a good handful of them have the letters MSF written on their business cards.

Before my departure, one of them sits me down in her office and rolls out a map on the table. From memory, she recounts all the significant happenings and dates around the current outbreak.

I remark on how widely dispersed the confirmed cases have been. “Exactly,” she says. “And that’s the biggest problem.”

Finally, I am handed a small red book that contains MSF’s most up to date guidelines on running a field hospital during a Haemorrhagic fever outbreak. I instantly recognise it as my dearest ally in the battle I am about to enter. 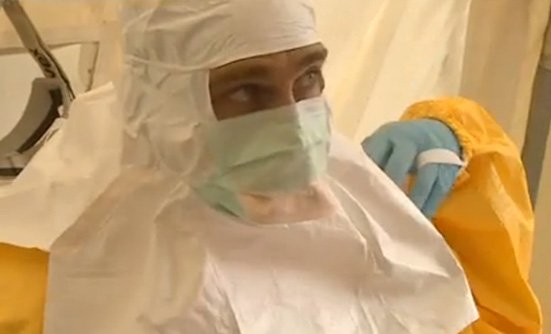 The world’s biggest Ebola ward … in a ghost town

Kailahun is currently in the eye of the Ebola storm. This sedated village with jungle-covered hills and dirt roads has until recently been bustling. Now it has largely been abandoned out of fear and panic.

On the outskirts of the village lies the biggest Ebola case management centre in the history of MSF, and indeed the world. It is manned by more than 200 local staff members and a group of almost twenty fieldworkers assembled from around the world.

The 56-bed centre has only been open for a month and there is already machinery in motion to expand it. It is the only centre in the greater Kailahun district which is able to admit patients with suspected Ebola.

Then we are off to work and the first order of business is hands-on personal protective equipment (PPE) training. This entails rubber boots, yellow plastic suits, hoods, masks and goggles – the end product of which is a person covered from head to toe with not a single area of skin exposed anywhere. It may sound like this would cause one to become quite hot – it doesn’t; it makes you boil.

Of course, it is necessary, it allows your entire outfit to be sprayed down with a chlorine solution when you exit the isolation area.

The undressing of PPE is the most critical step. In fact, there is a person dedicated to spraying and assisting (without touching) the undressing. He or she will make sure that we all remove PPE methodically and correctly so that no self-contamination occurs.

Ebola: Identifying the disease in patients is part of the problem

With training done, all boxes checked, and the green light given, I enter the isolation unit for the first time. My first patient is a nurse from a nearby clinic.

He has been seeing many patients; some are suspected to have Ebola.

He has now fallen ill himself. We collect his blood sample for testing. This is quite a process as well.

The laboratory will do a highly specialised test, called a Polymerase Chain Reaction, and we will know his result before lunchtime. I pray it will be negative, but he looks quite poorly.

Part of the problem with defining the disease is that Lassa fever is endemic in this area. Many healthcare workers have substantial immunity against it as they have previously survived it.

The symptoms of Lassa fever and Ebola (and Malaria for that matter) are indistinguishable in the early stages.

I wonder how many of these unsuspecting nurses, with the best intentions in the world, have treated suspected Lassa fever cases without realising that it was in fact, Ebola.

The case management centre is a neatly constructed tented village with timber and tin-roofed walkways. Orange fencing indicates the path to take.

At the one end, there is a triage tent where patients are received and divided into “suspect” or “probable” categories based on their history and apparent risk.

There are “suspect” and “probable” tents where patients wait for their blood test results, and from there, another walkway leads to the “confirmed” area.

This is where the majority of patients spend their days, either convalescing or gradually deteriorating. A little further along, in the distance, there is a makeshift mortuary.

The handling of deceased patients’ bodies is a crucial step in the operation. It appears that patients become more infectious the further their illness progresses.

For this reason, we take great care when handling bodies, especially when there has been bleeding or diarrhoea.

From epidemiological data, it seems the biggest risk factor for contracting Ebola in Sierra Leone is attending the funeral of someone who has succumbed to the disease.

Within the Kissi tribes, there are elaborate burial rituals, which entail the body being exposed and touched. Often funeral-goers will even kiss the lifeless body. It is, in fact, difficult to imagine an ideal setting for a virus like Ebola to proliferate. 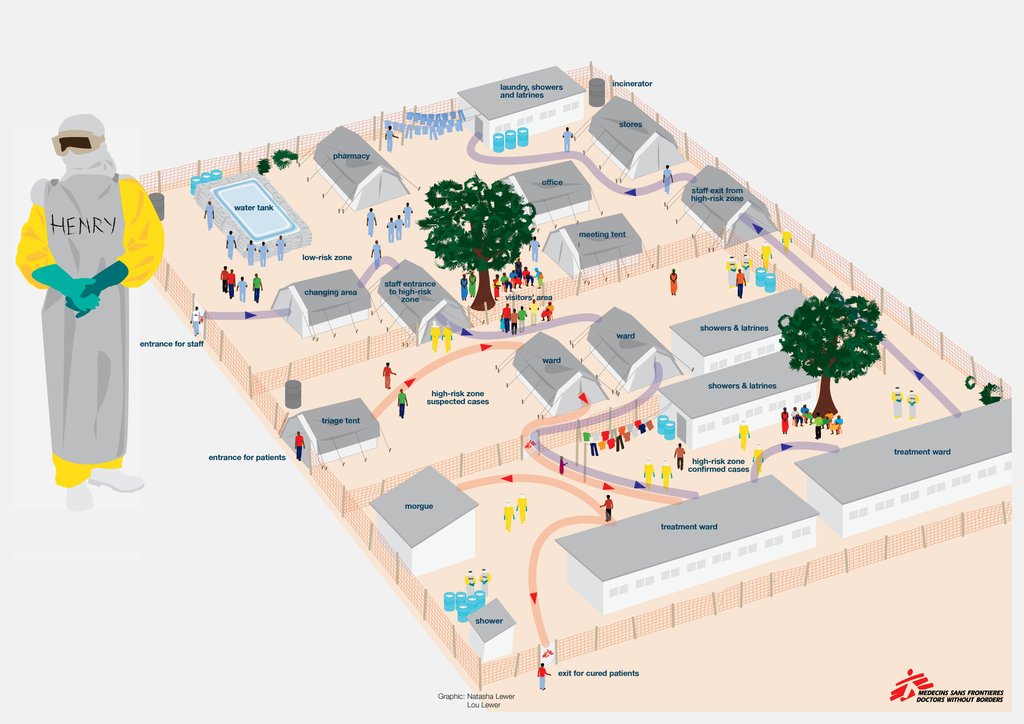 Ebola: Entire households erased one by one

In the days that follow we continue to receive terribly ill patients. My nurse-patient withers away as time passes. His body finally gives in when the normal immune system simply ceases to function.

We get into a routine of admitting between 10 and 20 new patients per day. We become accustomed to families being broken up because of discordant blood test results and entire households being erased from their family trees one by one.

The logisticians continue work on the expansion and finally, an 80-bed treatment centre stands as a monument to a collective failure in stopping the outbreak.

Of cours, not all patients exit the centre through the mortuary. Many suspected cases are discharged when their admission blood tests are negative. There is also a cure rate of approximately 20%.

The truth is that we don’t know whether we truly cured them – perhaps we only provided the final straw with their immune systems needed to break the Ebola camel’s back. A small service we are more than happy to provide.

Ebola: The magic of discharging a cured patient

It is a magical occurrence when a cured patient is discharged. First, they go through a decontamination area where their old clothes are removed and they wash in a disinfectant.

They are then given a new set of clothes and emerge from the isolation area clean and disease free. In a moment of unadulterated euphoria, staff members abandon their work.

There is singing and dancing and everyone joins in, welcoming the convalescent patient back into the world. Even the patients who remain behind will often clap hands from behind the orange fencing.
Discharged patients are given a copy of their laboratory results as well as a certificate stating that they are disease free. Still, the stigmatisation they often face when returning to their villages is immense.

There is a pervasive misunderstanding of the disease in many villages and also a deep mistrust of health structures. Our outreach teams are working hard to do contact tracing and mapping of the epidemic. They also focus strongly on health promotion and the dissemination of accurate information.

However, we still know of sick patients being hidden in their villages, out of fear and stigma. We also know of unsafe burial practices continuing in many villages. Sadly, this utter lack of insight is not limited to West Africa.

Social media is awash with hoax pictures and articles about alleged Ebola all over the world as well as conspiracy theories around bioterrorism.

A quick glance at international media reveals abundant ignorance in the reporting of the outbreak. Under the guise of true interest or even activism, most people are simply trying to ascertain what the risks are of their own comfortable lifestyles being affected by a disease, rampant on the other side of the world.

Ebola is not merely an impressive epidemiological phenomenon, it is not simply a matter for academic discussion, and let’s forget about bioterrorism for the time being. Ebola is about entire communities decimated and children orphaned.

It is about slow agonising deaths while health care workers can do nothing but provide palliation.

MSF is doing what it can, but we are being stretched to our limits.

Every day that the world watches in morbid fascination, but apathetically, the epidemic spins a bit further out of control. Perhaps the time has come to stop hypothesising about theoretical outbreaks where Ebola isn’t and start focussing on supporting ongoing efforts to fight Ebola where it is.

Find out more about Ebola.