Congolese refugees from the 'Triangle of Death' find safety in Zambia

In northern Zambia, Doctors Without Borders (MSF) has been providing support in two camps hosting more than 12,000 Congolese refugees who have fled violence in southeast Democratic Republic of Congo (DRC).

Near the border between southeast DRC and Luapula province in Zambia lies the so-called ‘Triangle of Death’, an area of several hundred square kilometres between the Congolese provinces of Haut-Katanga and Tanganyika.

The area is known for the appalling violence and brutal conflicts that have raged there for decades. Its name and background are in stark contrast to the beautiful, lush sanctuary of Luapula.

Tensions between different communities, armed groups and the government regularly erupt, forcing thousands of people to flee their homes in multiple directions, including DRC and also Zambia. After a flare-up of violence in September 2017, thousands of Congolese fled across the border and more than 12,000 are living now in Mantapala and Kenani camps in Luapula*.

In a volatile region with several ongoing humanitarian crises, some of them of very large size, the situation in northern Zambia has gone largely unnoticed. But the constant flow of refugees from the ‘Triangle of Death’ towards Luapula is a reminder that there is an old wound which re-opens again and again, and which risks turning the flow into a flood in any moment.

People are crossing the border on a regular basis; sometimes it’s a family of five, other days it’s a group of 50 or more. Most of the refugees come from the Triangle, but there are also some from more remote parts of DRC, like Kasai or the Kivus, as well as refugees from as far as Burundi.

Fleeing the ‘Triangle of Death’

This is the second time Kalunga, a 52-year-old refugee from Pweto (a town located inside the Triangle), has been forced to flee his home. He spent 10 years as a refugee in Zambia after violent clashes occurred in the city of Moba, before returning to DRC in 2009.

Kalunga fled to Zambia for the second time in October 2017, with his wife and seven children. "In Pweto, [militiamen] arrived and started killing people. Some members of the community fought back."

When they left Pweto, Kalunga and his family walked for hours before reaching the border, “There was no one at the border post when we arrived, so we slept under the trees that night. Our little boy became sick with malaria and was admitted to hospital for a few days."

Jonas, a 34-year-old from Moba city, escaped at the beginning of the year. It took him a while to make the decision, but in the end, he had no choice. "My parents and my little brothers were kidnapped and killed. I came [to Zambia] with my wife and our two-year-old son." As they were fleeing, Jonas was shot and injured by an arrow. 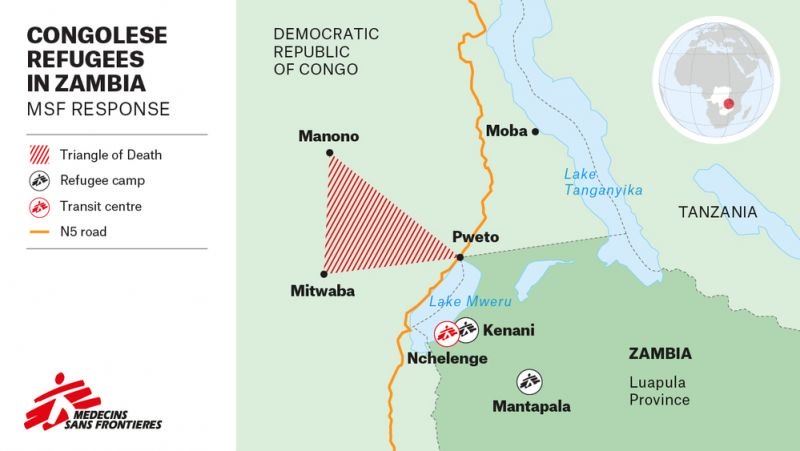 In response to the needs of the refugees and the local population, MSF started supporting the Zambian Ministry of Health in two camps, Kenani and Mantapala, in March this year. Both Kalunga and Jonas, nurses by profession, have been working as community health workers of the organisation for the past few months.

MSF operated nutritional feeding centres and supported a referral system to the local Sant Paul hospital. The most common diseases seen by the teams are acute watery diarrhoea, respiratory tract infections and malaria.

Between March and mid-May, more than 6,500 medical consultations were provided, at least 92 people received emergency care and 164 children under the age of five were treated for severe malnutrition. Over 5,600 children were vaccinated against measles and several hundred against tetanus, diphtheria, whooping cough and pneumococcal diseases.

Adjusting to life as a refugee

A few weeks ago, local authorities began transferring refugees from Kenani to the more remote Mantapala camp. Refugees are transported in small buses and temporarily housed in a reception centre with communal tents. They are then assigned a plot of land and build their own shelters using wood and plastic before the next group of people arrive.

While life is difficult for the refugees, some have managed to find jobs with humanitarian organisations present in the two camps. Others have found work where they can; setting up small food stalls or trading goods. It’s not much, but the ability to provide for their families helps people adjust to life as a refugee.

“If there is one thing that distinguishes this refugee crisis from others, it is that the authorities allow and encourage refugees to get jobs as daily labourers. This does not happen in many other places,” says Khaled Fekih, MSF’s head of mission in Zambia.

Violence in the Triangle shows no sign of abating just yet. “Every week there are reports of more security incidents in the Triangle,” says Fekih. “The region is in a constant state of instability.”

Although some people have gone back to their homes, for most of the refugees living here in Luapula, there is no prospect of returning anytime soon.

*According to UNHCR data, Zambia is currently hosting 42,000 refugees, the majority of them Congolese, in its whole territory.

MSF handed-over projects in Luapula to the Zambian Ministry of Health in mid-May, after making a series of donations of medical supplies. It will continue to monitor the situation as it evolves and remains poised to respond if necessary.

Between January and March, MSF also supported the Zambian authorities in the management of cholera cases by running a Cholera Treatment Centre in Lusaka and assisting health structures in the catchment area with training and donations of logistic and medical material. MSF teams saw nearly 500 suspected cases of cholera during that period.

Find out more about MSF's work in Democratic Republic Congo.