Malawi has long struggled with a high prevalence of HIV, and HIV/AIDS remains the most common cause of death, with an estimated 13,000 AIDS-related deaths a year.

In recent years huge investments have been made by the Global Fund and Pepfar to manage and reduce the number of people with HIV and to reach the UNAIDS 90-90-90 target by 2020.

However, lately, the progress in decreasing the number of HIV-related deaths has stagnated. In an effort to improve care for people with advanced HIV in Nsanje district, Doctors Without Borders (MSF) and the Ministry of Health have established a new operating model called the ‘circle of care’.

Read the report "No time to lose: detect, treat and prevent AIDS" 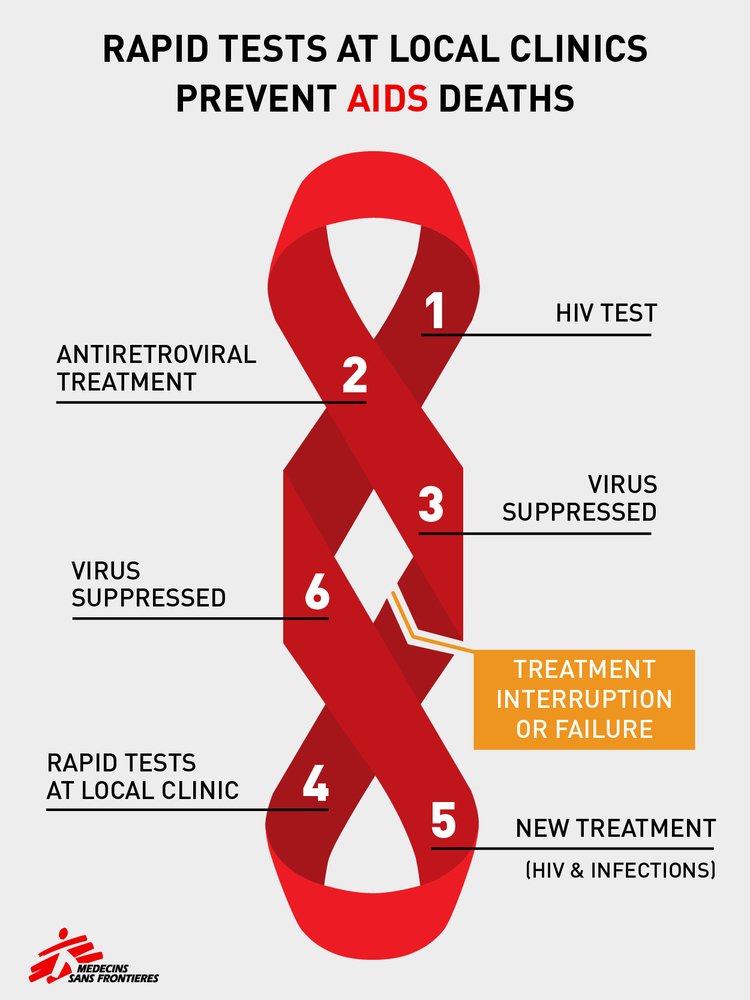 “The circle of care model aims to reduce mortality among HIV patients through early detection and strengthening the referral system within the circle, e.g. the community, health centre and hospital.

This is achieved by enabling communities to identify sick patients, ensuring efficient diagnosis and initiation in the health centres, and in-depth assessment and quality care in the district hospital,” says Jomah Kollie, Medical Team Leader for the Nsanje project.

When a patient arrives at the Nsanje District Hospital, they are brought to the rapid assessment unit where they can be quickly stabilised and assessed. Once this is done, the patient can be put on the right treatment and admitted to the ward.

Previously, most HIV/TB activities were done at a health facility level and not much in the communities. As a result, people who defaulted had no proper follow-up.

“It will not happen again”

25-year-old Lita is sitting with her parents in the shade outside the female ward at Nsanje District Hospital. For her, it all started when she wasn’t feeling well at the beginning of the year.

Her family brought her to the hospital where she tested positive for HIV. Lita was advised to start taking ARV drugs. But after she was discharged, she stopped taking her medication and, as a result, she started to get sick again.

Lita was re-admitted to Nsanje District Hospital in October with fever, bloated stomach and leg swelling. This time, her father is determined to make sure his daughter follows her treatment programme.

“It will not happen again, as I will be around,” says her father Gerrald. “I will be there making sure that when she wakes up, I am there and she takes her drugs. The same with the evening dose, I will make sure that before she goes to sleep, she has taken her drugs.”

Not many days ago, Lita was unable to walk without support. Now she is feeling better, but she misses the food back home and her three-year-old daughter. The next step for Gerrald is to get his granddaughter tested as well.

“I want to bring her here for testing so that we get to know her status – if she is HIV positive or negative,” he says.

Work in the community

The circle of care starts at the community level. Here MSF community health workers work with the traditional authorities, patient groups and local associations to reinforce existing community structures and identify those who are sick and need more care while creating community awareness of symptoms and danger signs.

“Previously, most HIV/TB activities were done at a health facility level and not much in the communities. As a result, people who defaulted had no proper follow-up,” explains Moses Luhanga, information and education manager.

When someone is flagged as requiring further treatment, they are then referred to a nearby health centre.

Here MSF, working with the Ministry of Health, has instituted a package of care which begins with a very quick assessment and some tests; CrAG for cryptococcal meningitis, CD4 count and a test of blood sugar levels and urine.

Once it is established that the patient has a condition requiring advanced management, they are referred to the district hospital.

Back at the hospital, Austin is getting ready to be discharged. He and his wife are carefully wrapping up their belongings in chitenjes, traditional fabrics used in Malawi.

After 12 days at the hospital, they are happy to go home. He has been diagnosed with diabetes; like being HIV positive, it is a condition he must manage for the rest of his life.

I want to be the voice of the change in my community. I want to find people that are suffering from HIV and change this community to be disease-free.

To make sure Austin and all the other HIV positive patients being discharged stick to their treatment programmes and don’t fall back in the circle of advanced HIV, MSF has a post-discharged procedure where counsellors will go and visit them.

Although Nsanje district is close to meeting the 90-90-90 targets, the next challenge will be to make sure people on HIV medication continue their treatment and receive quality care when falling sick.

But getting people to know their status, and start the treatment, is a step in the right direction. Before the circle of care was implemented in the district, statistics from Nsanje district hospital indicated that 27 per cent of people entering the hospital with advanced HIV would die.

For people like Austin, getting the care he needed not only made him well, it also inspired him to make sure other people who are HIV positive get to know their status, and then start and stay on the life-saving treatment.

“I want to be the voice of the change in my community. I want to find people that are suffering from HIV and change this community to be disease-free. After being looked after, I cannot just stand here while someone is suffering.”