Noah Traoré was the first person in the Tombolia neighbourhood to have his finger pricked at the Doctors Without Borders (MSF) mobile clinic. ‘As the head of this neighbourhood, I have to set an example. I love my community, so it is my duty to encourage them to protect themselves against HIV/AIDS,’ he explains.

This is no minor victory. The low prevalence of HIV in Guinea (1.7% of the population) means that very few people know about the disease and that people living with HIV face stifling stigmatisation. Therefore the support from community leaders were a key aspect of MSF’s strategy to have the campaign widely. They attended training and information days, primarily through the support of associations of people living with HIV, and then organised the screening campaign in their neighbourhoods themselves.

‘We were concerned that Guineans would be all the more reluctant to come for screening that, for the most part, MSF is associated with Ebola in Guinea. Fear was something we had to take into account. So we set modest targets: 1,200 people screened across six neighbourhoods in the Matoto Est district,’ explains Luis Moreno, field coordinator for the HIV/AIDS project in Conakry. But after six weeks of the campaign, 6,095 people had come to be tested, five times more than expected.

The campaign was supported by a large team of health promotion officers who were trained during the Ebola epidemic. For three weeks, 14 health promotion officers and 45 community workers went through the Matoto Est district, street by street, with HIV activists carrying out the screening and providing counselling. ‘The associations of people living with HIV are fantastic allies. 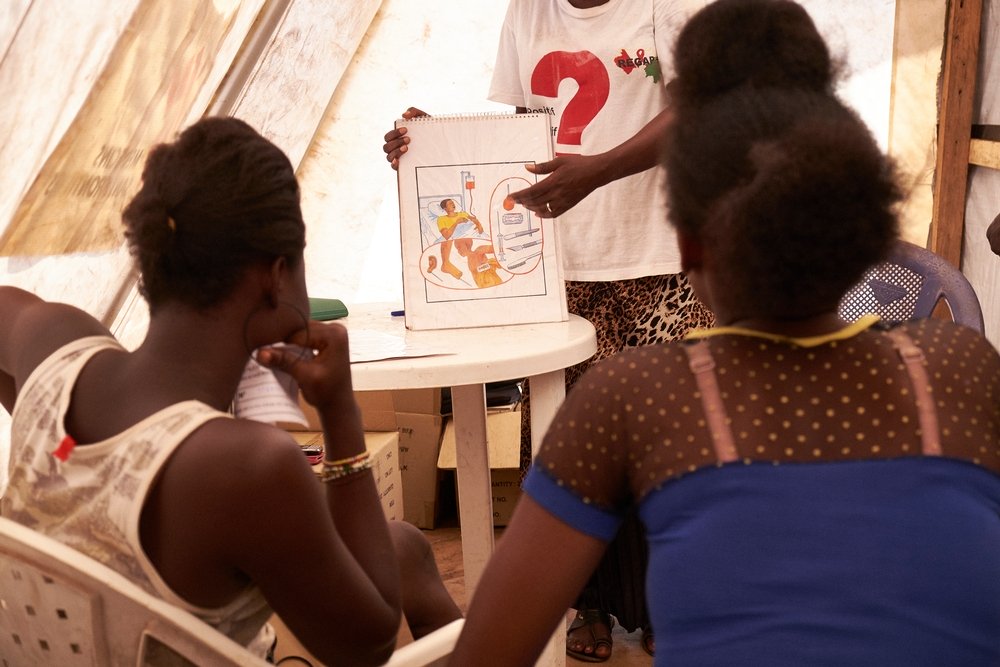 Since Guineans wrongly believe that HIV/AIDS is an automatic death sentence, seeing HIV-positive people in good health because they have been receiving antiretrovirals is the only truly effective way of changing people’s mentalities, decreasing stigmatisation and increasing demand for treatment,’ explains Tidiane Touré, head of psychosocial support at MSF.

Barely 27% of Guineans living with HIV are receiving ARVs, which explains the high death rate among people with AIDS and further reinforces the perception of the disease as a death sentence. Due to this low ARV coverage, morbidity and mortality resulting from AIDS is a burden that is out of proportion given its low prevalence: in 2014, there were 3,800 deaths recorded from AIDS in Guinea, more than Swaziland (3,500) – the country with the highest prevalence in the world and twice as many people living with HIV. This is why the MSF project wants to expand its HIV activities and develop treatment models suitable for countries in West and Central Africa, which have been largely forgotten by the AIDS revolution. This is particularly the case in Guinea, where the Ebola epidemic made it even more difficult to have access to healthcare, which was already limited.

Further strategic adjustments to the approach are needed to better target women, who are on average more affected by HIV than men but were not as well reached by the campaign, as well as to better target key populations such as sex workers and men who have sex with men.

MSF has been working in Guinea since 1984, providing HIV and TB services since the start of ARV treatment in 2003. Currently, in collaboration with the Ministry of Health, MSF provides support to 7,639 HIV patients (24% of the national ART cohort). It offers diagnosis, treatment and adherence support through a decentralised approach in six health centres across the capital city, as well as at an outpatient clinic in Matam district. MSF offers viral load testing for patients in the facilities it supports. MSF also supports hospital care for severely ill patients and treatment for Opportunistic Infections (OI) such as Kaposi Sarcoma. MSF partners with patient associations that provide peer support, monitor health outputs through the ‘Observatoires’ and advocate for scale up of ART access.