Grande Synthe: Out of the mud and into shelters

Between 7 and 9 March 2016, Doctors Without Borders (MSF), Grande Synthe municipality and various partner organisations helped the 1,300 migrants in the camp in Basroch to move to the new site known as the “Linière”. On 10 March, the municipality began dismantling the old camp.

“By the end of the first day, more than 900 migrants, most of them transported in buses hired by the municipality, were already settled in Linière camp. As night fell, the atmosphere was relaxed, with kids running around, women hanging out washing and people having tea in the big hall. A semblance of a return to normal life, after months of being confined in tents and mired in mud,” comments Angélique Muller, MSF project coordinator in Grande Synthe.

For long months, migrants had subsisted in tents better suited to camping surrounded by rat-infested piles of rubbish. Mud was everywhere and conditions were not only shameful but dangerous too. The move came after a long process during which MSF’s teams of cultural mediators worked with the migrants to explain how they would be moved and what life would be like at the new site.

“The migrants felt dehumanised; they couldn’t take it anymore. Basroch was like a pressure cooker. Any tension was liable to quickly degenerate into violence. The migrants’ main concern was that entry to the new camp would require finger-printing, which is definitely not the case,” Muller adds. 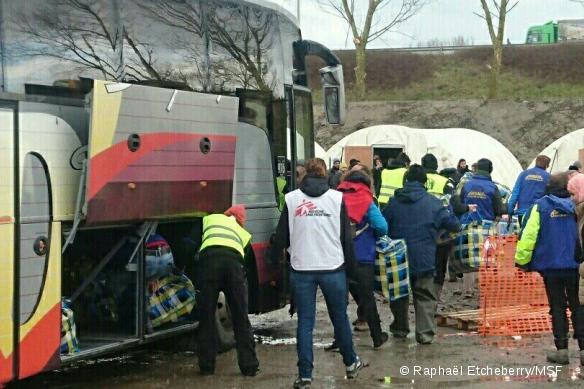 The new camp, originally intended for 2,500 people (the number of migrants present in January 2016), will provide 375 heated wooden shelters, each accommodating up to 4 people. Whereas all the families and children have moved into the 270 that have already been built, some migrants are being temporarily put up in heated tents while waiting for more to be ready – around 20 are assembled every day. MSF is financing the 2.6 million euros it costs to construct the shelters from its own funds.

MSF is not running the camp and its management has been assigned by the municipality to UTOPIA 56. There will be no identity checks at the camp entrance and migrants will be free to come and go as they please. Local and international agencies that provided relief and assistance in Basroch camp will continue to distribute food and essential items, etc. at the new site. They will also be involved in building community facilities such as schools and kitchens to further improve the camp.

“Improving living conditions for the migrants had become a real humanitarian emergency. In view of the authorities’ refusal to acknowledge the reality and their lack of assistance, this was the only response possible. They don’t want a new camp and they still contest the grounds for opening it,” laments André Jincq, head of migration programmes at MSF.

“Setting up humanitarian camps in Europe can only be a temporary solution for people fleeing from conflict or unstable zones; migration policies and practices must break with the inhumane methods many countries are implementing to dissuade thousands of people who have no other choice than to continue their exodus to re-build a future for themselves.”

In the new camp, MSF will shift its focus back to delivering medical care, its core activity. The organisation has moved its mobile clinic from Basroch into a building set aside for it and partners Médecins du Monde, Gynécologues Sans Frontières and the French Red Cross.