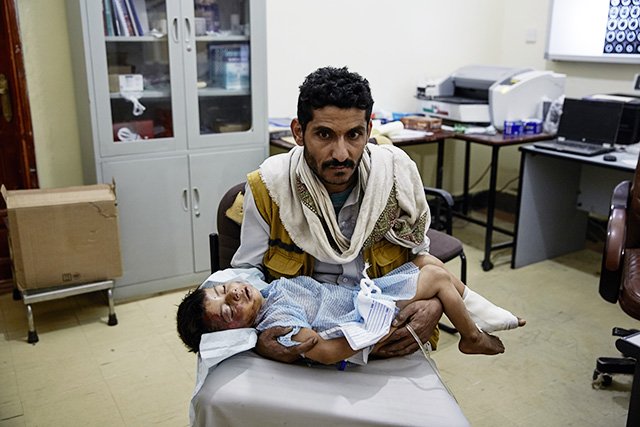 Interview with Thierry Goffeau, project coordinator for Doctors Without Borders (MSF) in Aden from mid-May to early August. During that time the violence was at extreme levels in the capital of the southern part of the country.

In late July, Southern Resistance fighters, supported by the Saudi-led international coalition, retook control of Aden. What was the result?
"The situation in Aden has improved slightly since the coalition forces retook the port area, which had been occupied by Houthi rebels, in mid-July. Boats were able to dock and deliver humanitarian aid – specifically, food, as well as fuel and bulldozers. Thanks to this equipment and supplies, street cleaning could begin.

"The coastal road, which leads from the airport to the Crater neighborhood, was cleared and the tanks were removed. The coalition now holds the airport, which is being rehabilitated. The population is breathing a bit, but the city is destroyed.

"It will take time for everything to be restored, which will also depend on changes on the ground. That said, the situation today is completely different from what we saw from May or June until mid-July. That was a time of around-the-clock insecurity, day and night. Fighting occurred every day of my 2½ -month mission.

"The city was surrounded by Northern forces - Houthi rebels, allied with former President Saleh’s Republican Guards - while Southern Resistance forces were concentrated in the northern and northwestern districts. Shooting and bombings occurred every day, sometimes next to our hospital, which was 400 meters from the front line.

"Because of this extreme insecurity, it was very difficult and dangerous to move around. There was very limited access, if any, to basic foodstuffs.  The population had to deal with shortages of flour, gasoline, natural gas and water. The hospitals could not accept any more patients and many of the qualified health care workers had left the city."

Are the changes visible now?
"Yes, the fighting and shelling have stopped in most of the city. However, Houthi rebels are still hiding in buildings in the southern part of the city. And we are taking in wounded patients at the trauma centre in the Crater district and the hospital in the Sheikh Othman district. The front line continues to shift northwards, with the forces of the Southern Resistance who have begun to head towards the city of Lahj.

"There are still checkpoints. And the city is still dangerous because of sniper fire and stray bullets. Everyone is armed. One person shoots because he’s happy or for his own amusement and another shoots because he’s not happy. As a result, we are still treating patients with gunshot wounds. You can gather up a handful of stray bullets every day in the hospital compound where we work in the Sheikh Othman district. Last week, a bullet whizzed by the window of my office. A few days earlier, one came through the wall of the bedroom of one of our surgeons."

Clashes between the Southern Resistance and the Houthi militias have led to a large number of victims. Have you treated many of them?
"On July 19, we treated 206 wounded patients within a few hours at the Sheikh Othman district hospital. The first patients arrived around 9:30 a.m. They had been struck by shrapnel. They told me that they were from the Dar Saad district, which had been shelled by the Houthis.

"This attack targeted a poor and working-class neighborhood, where people live crowded on top of one another. It is of no strategic interest. That day, we treated an unbelievable number of wounded patients. It went on all day, until 3:30 p.m.

"There were women, children, elderly people – basically, civilians. We had to turn corpses away. Cars and pick-up trucks brought the wounded to the hospital because there are very few ambulances left in Aden.

"At one point, I climbed into a truck that was carrying 15 bodies. Some were dead.  But there were people who were thought to still be alive.

"It was very tense because I could take only the wounded to be treated.

"Several days later, Southern Resistance fighters launched an attack, on the north of Aden. On July 25, we treated 167 wounded people and 111 the next day. They were all fighters."

Has calm been restored at the hospital?
"Overall, yes, but we face the recurring problem of armed men who want to enter when they bring in the wounded. They are very agitated when they arrive, riding on pick-ups with machine guns or cannons mounted on them – their vehicles are sort of a cross between something from the Mad Max films and a Hummer. We asked them to leave as quickly as possible.

"Normally, weapons are not permitted in a hospital where MSF is working.  But here, we have to manage and absorb an extreme level of violence – whether it’s at the gate on the street, at the entrance to the building itself or in the patient triage area.

"A crowd of people gathers - Southern Resistance fighters, visitors, caretakers, patients coming for post-operative care and who can’t be treated when there is an influx of wounded people. And they behave in a threatening manner.

"The staff is now exhausted. The level of violence has only increased since early May.  But the surgical teams did an amazing job. The two operating rooms were busy 24 hours a day. The emergency team was tremendous. Thanks to the entire MSF team, this project had a significant impact. They saved many, many lives and continue to do so. We are also working in a trauma centre in the Crater district, which was a Houthi-held area until mid-July. We managed to maintain the neutrality of this facility, treating civilians, Houthis and Southern Resistance fighters.

Are living conditions improving for the population in Aden?
"There are still water shut-offs. But that’s getting better now that the pumps can operate.  As far as electricity goes, there was none over the last two months. The hospital generators had to run 24 hours a day and one broke down.

"Over the last three months, we have had many days without water – without a single drop of water. We had just enough water stored at the hospital to sterilize the instruments. People were drawing from the city’s old wells, which were being reused, but the water was very salty and poor quality."