Six years into the war in Syria, civilians are caught up in a complex humanitarian crisis in which millions have no access to basic healthcare. In the face of their colossal needs, Doctors WIthout Borders (MSF) reiterates its call to warring groups to allow access to Syria so that victims of the war can receive medical assistance.

“All parties to the conflict, neighbouring countries and international actors must allow access for humanitarian aid and not use it as a political tool,” says Pablo Marco, MSF’s Middle East operations manager.

“They must also allow those in need of medical assistance into areas where they can have specialised treatment and enable medical staff to access them, while ensuring the protection of first responders, medical staff and facilities.”

The war, coupled with attacks on medical personnel and facilities, has dramatically weakened Syria’s previously well-functioning healthcare system. Medical needs have significantly increased due to the conflict, placing tremendous pressure on the remaining healthcare infrastructure.

MSF teams currently operate in several Syrian governorates to provide life-saving care. But the Syrian government has still not granted authorisation for MSF to work in the territories it holds, despite repeated requests.

In addition, MSF is not present in areas controlled by Islamic State as there are no credible assurances that the safety of its staff will be protected.

“All this puts large areas out of reach for MSF for the moment,” says Marco. “While MSF will continue its efforts to work across all Syrian territories, we call for space for independent impartial care in Syria and for aid groups to be allowed to conduct concrete humanitarian and medical responses in areas of need.”

However, hundreds of thousands continue to seek refuge abroad.

“MSF calls on Syria’s neighbours to allow the cross-border evacuation of not only vulnerable cases, critical cases, and the severely ill and wounded, but also of all those seeking refuge, in the spirit of the Refugee Convention,” Marco says.

“The rest of the world cannot turn its back on thousands of people who have fled war and persecution. Respecting peoples' right to seek asylum and obtain proper assistance and protection is fundamental.” 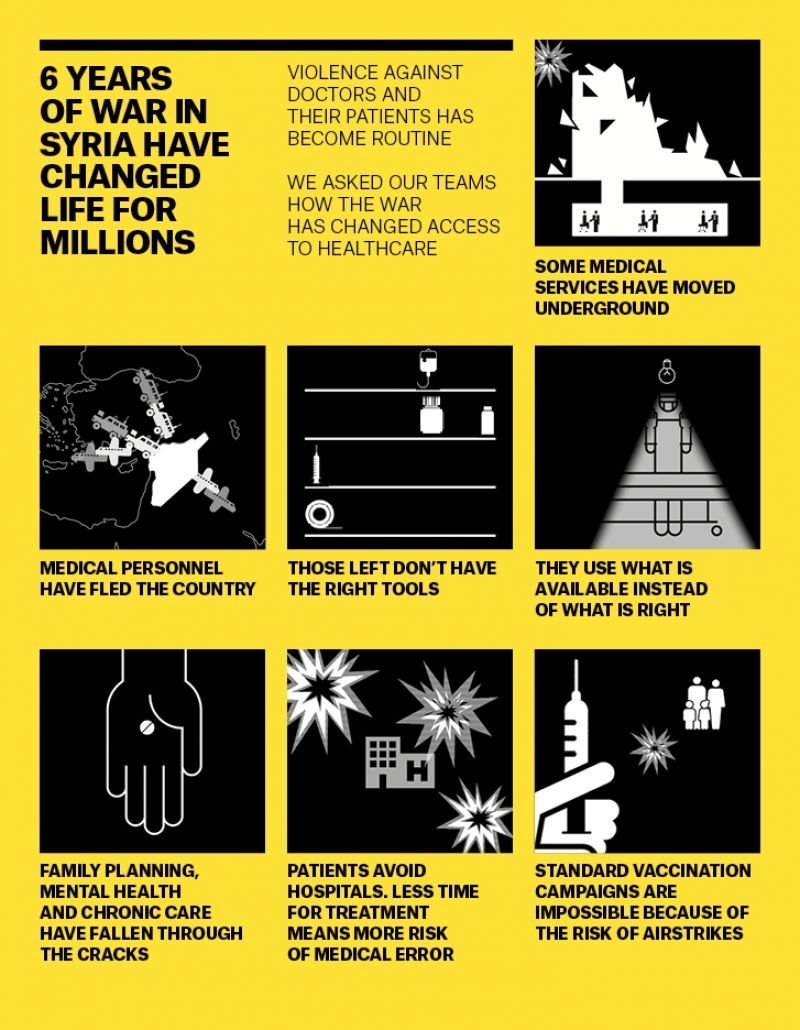 As the conflict enters its seventh year, Syria remains one of the most complex and volatile humanitarian crises in the world today. In the war-torn country, international humanitarian law governing conflicts has been entirely overlooked, leading to an absence of due care from parties involved in the conflict to avoid civilian casualties.

Find out more about MFS's work in Syria.

Read full report on the "Changes in medical practises in Syria"