Letter to the doctors of East Ghouta

A letter addressed to doctors in East Ghouta; by Lorena Bilbao, Operations Coordinator for MSF programmes in Syria

Over a month has passed since the Syrian government and its allies intensified their military offensive in East Ghouta. Over a month of relentless bombing and shelling, on top of five years of intense siege. Week after week, we tried to support you when thousands of wounded and dead were brought to your hospitals; day after day we listened to you when you described your increasing level of exhaustion and despair.

We made calls to the Syrian government, their allies and all other parties involved in the fighting to make it stop. We tried, as much as we could, to be with you from the distance. But little by little, since the 18th February, we were confronted again with the limits of our ability to provide you and your facilities with assistance when the needs were highest. 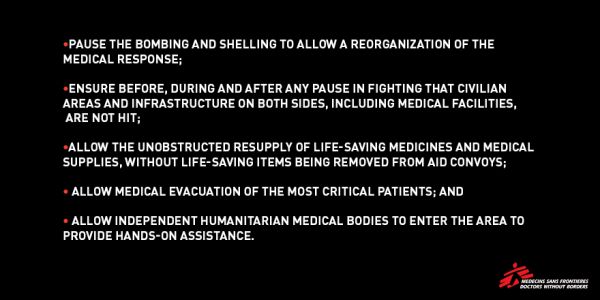 For an organisation that prides itself for being in proximity with medical teams and patients, we struggled to grasp the idea that we could only support you through erratic WhatsApp conversations and meagre supplies, even as you were dealing with mass casualties on a daily basis. We could do nothing when essential medical items were not allowed on the official humanitarian convoys, and the medical equipment in our warehouses in East Ghouta never seemed to be enough to respond to the needs of your patients.

At this very moment, our ability to assist in providing healthcare in East Ghouta is almost non-existent. We went from supporting 20 clinics and hospitals at the beginning of this offensive, to just one clinic, which we are not even able to provide medical supplies to anymore, a month later. The other 19 facilities were closed or abandoned after government forces reclaimed the area, or put out of service after being repeatedly hit during the offensive. The medical needs remain overwhelming: people do not simply disappear when the frontlines shift.

Being confronted with how little we can do makes me reflect on how much you’ve accomplished and how crucial your work is. While casualty figures keep rising, few people realize how many lives are also saved at the same time.

What would have happened if you hadn’t been there? How many more dead, every day, in East Ghouta? While our ability to support you is compromised, my admiration for your work remains. Your everlasting dedication humbles all of us.

When you managed to find brief pauses to leave work and go home, you were confronted to the same horror as the patients lying in your wards. I still remember a message we received from one of you, two weeks ago.

You were describing having to flee in the middle of the night with your family, as fighter planes flew overhead. You told us about people in the street struggling to walk, children crying and screaming, and poor souls trapped under the rubble. You talked about your relief when you thought you had reached a safe place. But the bombing started again. I remember the last line of your message: “My children, my wife and all people around me could die at any moment and I cannot do anything. I will never be able to forget this moment.”

The war has been going on for over seven years now. During that time, we have continuously tried to access different areas of the country where medical and humanitarian aid might be needed. We have done that regardless of who controlled the region where our help was needed. But, in spite of repeated attempts, we have failed to assist people in government-held areas. Since May 2011, MSF has reached out to the Syrian government to request permission to access these areas, and we continue to do so now, but so far we have simply not been allowed.

With unmet medical needs increasing in areas outside the Syrian government’s control, such as East Ghouta, we chose to launch medical activities without official authorisation. This was never an ideal way to support healthcare, to provide you with the right equipment, drugs or advice, but we tried our best under the circumstances. I want you to know that the Syrian government’s repeated rejections and all the other struggles will never change our determination to support your work.

We know how crucial your profession is, no matter where you are in the country, whether you remain in East Ghouta or are somewhere else in Syria. We will keep on trying to gain access to areas where medical and humanitarian aid is most needed and we will keep doing our best to help you save lives. Even with extremely reduced access, we will continue to offer what technical and moral support we can until we are finally able to do more, for you and for all Syrians who need medical assistance. If the level of brutality has brought humanity close to collapse, you are the reason why a piece of it is still alive.

By Lorena Bilbao, Operations Coordinator for MSF programmes in Syria

Find out more about MSF's project in Syria

MSF has been assisting the provision of medical care to communities in the East Ghouta region since 2013. Unable to be physically present, the medical humanitarian organisation supported Syrian medics on the ground from abroad by providing: medical supplies; financial support in lieu of salaries for staff operating those hospitals and clinics; guidance on matters of public health, mass casualty response and hospital and pharmacy management; and technical medical advice to doctors and practitioners when they are confronted with conditions or pathologies that have been outside their areas of formal medical training.

MSF’s activities in Syria do not include areas controlled by the Islamic State group since no assurances about safety and impartiality have been obtained from their leadership, nor can MSF work in government-controlled areas since MSF’s requests for permission to date have not resulted in access. To ensure independence from political pressures, MSF receives no government funding for its work in Syria.

East Ghouta, Syria: "Doctors and nurses are running on empty"