CAR: “I’m a civilian, not a fighter. Why did they attack me?”

In Bria, as in other places in Central African Republic (CAR), fighting opposing various armed groups is increasingly accompanied by attacks against civilians. We hear from patients who have survived the violence and see how MSF responded to the consequences of fighting that occurred between 15 and 18 May 2017.

Thomas is sitting in a ward in Bria hospital. All his fingers on both hands have been amputated, his left arm is broken and an external fixator supports one of his legs after machete blows cut through his thigh almost to the bone. “It was 8 in the morning on Tuesday, May 16. I was home with my family and friends staying with us. They forced their way in. Armed with machetes and clubs, they pushed the women out and beat us up. They said we were anti-Balaka, but I’ve been a safari guide for almost 40 years”, exclaims 65 or maybe 70-year-old Thomas — just one of the victims of the fighting that shook the town between 15 and 18 May 2017.

Called “sparkling Bria” because of the region’s numerous diamond mines, the town’s 47,000 inhabitants is controlled by different armed groups. For example, there’s the mainly Muslim neighbourhood that is home to FPRC and UPC (called “Arabs” to distinguish them from UPC Peuhl who they have disassociated from) combatants, and Christian neighbourhoods where so-called auto-defence forces have been set up — a complex web of alliances and misalliances that sometimes explode, as happened in the middle of May. This time the Christian neighbourhoods were targeted. In November 2016 and March 2017, it was Peuhl communities who were the primary victims of the violence. More than 2,800 Peuhl people have since sought refuge in the Gobolo enclave that is under the protection of UN peacekeeping forces.

It appears that in the country there is no longer any distinction between civilians and combatants, a fact people are only too aware of and the reason why they flee at the first opportunity. Whole neighbourhoods of Bria have been emptied of their inhabitants, their houses bearing traces of the fighting: bullet holes, walls blackened by fire, homes without roofs. “I’ve nowhere to go home to”, continues Thomas. “Everything’s been destroyed or looted. All the gifts my European customers gave me to thank me for my services as their guide have been stolen. I’ve lost everything. My family and I have found refuge for now in the hospital, but if we have to leave, we’ll go into the forest. We’re not going back to our neighbourhood”. Like Thomas and his family, around 6,000 people prefer to sleep overnight in the hospital compound where hospital staff co-habit with the displaced and their market stalls.

Around 41,000 people — over 85% of Bria’s population — have fled their homes. Most of these newly displaced have sought refuge in PK3 displacement site where they hope to be safe. The camp was set up to accommodate 3,000 people after fighting broke out in November 2016; 25,000 people are there now, and their numbers continue to grow daily. The most fortunate are those who arrived eight months ago set up in the middle of the camp. All around them are makeshift shelters made out of a few poles and one or two bits of plastic sheeting salvaged from looted homes, with just a mat on the bare earth. The small forest surrounding the site disappeared in just a few days as later arrivals chopped it down to try and provide some protection for their families.

It’s the rainy season now. When the weather’s good, there are children running all over the place but, when it rains, all the families huddle together, ankle-deep in mud, under inadequate plastic sheeting. Ironically, the camp’s residents have nicknamed PK3 “Ledger”, the name of the biggest hotel in Bangui.

MSF has increased the mobile clinics it launched in PK3 camp last November for children under the age of 15 years. During the past two weeks, the teams have given over 600 consultations, principally for malaria. MSF is also providing water, as the shortage of latrines and water on the site could prove catastrophic in the event of an epidemic. The humanitarian response is slow in coming to Bria and new arrivals have yet to receive basic necessities, such as plastic sheeting and soap. Acute paediatric cases are referred to the hospital where, between 15 and 18 May 2017, MSF treated 44 wounded patients, ­one of them Thomas.

In addition to PK3, MSF’s mobile clinics also go to Kolaga, 10 kilometres south of Bria, where people recently displaced now arrive from the town’s southern neighbourhood as well as from more remote areas where abuses are being committed and too often go unnoticed, amongst general indifference.

MSF continues to provide consultations to people in Gobolo, the enclave in Bria, where Peuhl communities have been prisoners of the insecurity since November 2016. A family who has just arrived tells the teams their story. An elderly woman, two boys and two girls and several small children walked over 50 kilometres from their encampment after it was attacked in the middle of the night a couple of weeks ago by around 100 men armed with machetes and automatic weapons. The eight men of the family, two women and a baby were killed. Those who were left took advantage of the confusion and hid in the long grass. 300 cattle and 100 sheep, the family’s livelihood and a lifetime’s work, were stolen. Fearing that the armed men would come back and kill them, the survivors of the massacre stayed hidden for several days. They then managed, with help from some Muslim shopkeepers, to get to Bria where UN peacekeepers escorted them to the Gobolo enclave.

These attacks against Thomas and this family are just some of a growing number of incidents in Bria and east CAR where civilians are increasingly targeted. All the country’s communities are vulnerable in a cycle of violence that feeds on a climate of repeated attacks and reprisals. 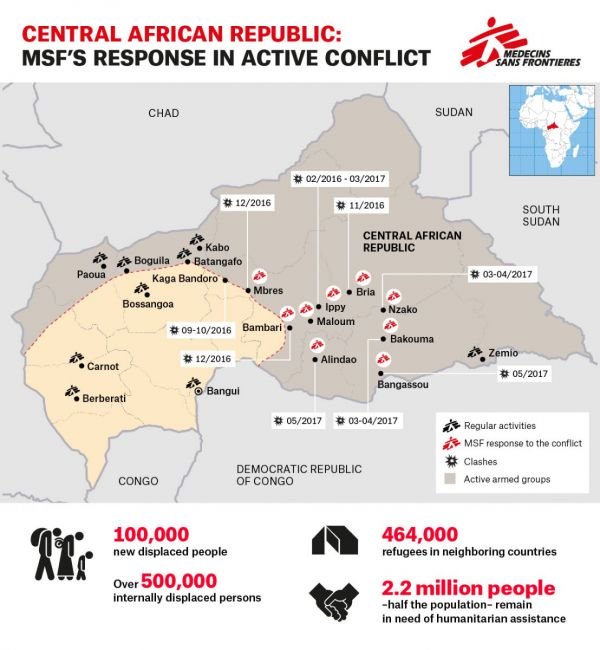 The Ministry of Health, International Medical Corps and MSF teams in Bria launched a contingency plan. Between 15 May and 18 May, a total of 41 casualties received treatment in Bria hospital. During the last two weeks in May, there were 1,100 outpatient consultations linked to the current crisis. MSF also launched mobile clinics in Bria and the surrounding villages, providing 860 consultations to IDPs. MSF also supplied water to PK3 camp and helped build latrines.

Find out more about MSF's activities in the Central African Republic.