Interview with Ainslie McClarty, MSF deputy field coordinator in Durban, KwaZulu-Natal, about the situation of the hundreds of Burundians and Congolese migrants stuck in camps after fleeing from a wave of xenophobic violence in South Africa in April-May 2015.

What is the current situation of the Burundians & Congolese migrants who have been stuck in camps for displaced people in Durban?

We’ve heard that the Chatsworth camp will be closed down on 30th of June, and that it’s hoped that all remaining inhabitants will have been re-integrated by then.

What kind of activities has Doctors Without Borders been conducting in the camps since the attacks in April?

MSF conducted the following activities in the camps:

Tell us more about the nature of the psycho-social support that MSF has been providing to people in the camps?

MSF deployed a psychologist to all the camps to assess the inhabitants very early on. She confirmed that a large portion of the population was suffering with repeated abuse, insecurities and had experience of ongoing trauma, with many showing signs of having Post-Traumatic Stress Disorder.

Many of them had experienced extreme trauma in their country of origin, again on their journey to South Africa, and then as displaced people in South Africa. Their reaction to the latest episode of xenophobia was compounded by earlier experiences (in 2008) which left them hopeless, confused and very fearful, not only for their present situation, but also for the future. We knew then that a psycho-social intervention was needed and quickly.

What are the main concerns for the future?

The majority of people in the camps are concerned about re-integration as they do not see any change in attitudes in the communities that they left. Some had been part of Dialogues with the Department of Community Safety and Liaison in their relevant communities, but did not receive evidence that the communities had changed. Some areas refused to take foreigners back into their communities. 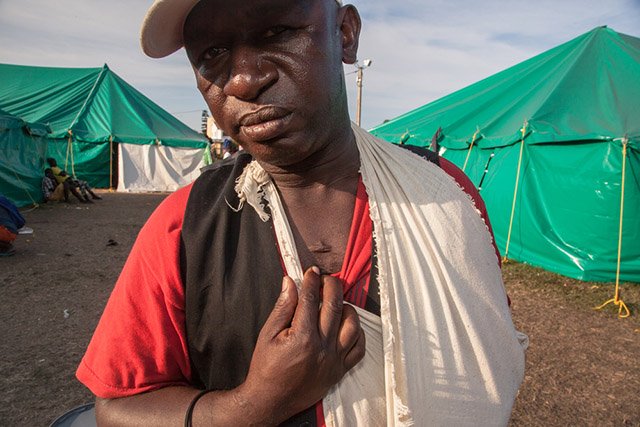 Most of the displaced migrants do not feel they can trust government departments like the South African police, Department of Social Development or the Department of Health due to poor encounters in the past or refusal to assist them. Add to this the weak response of the UNHCR, and many of them feel isolated, vulnerable and afraid. Many seriously contemplated returning to their conflict-ridden countries as it may be safer for them there.

As far as education in the camps was concerned, despite many communications with the Department of Education, Save the Children, Department of Social Development and Childline, no school intervention was achieved.

An initial survey was done listing the amount of children, age, grade and school attended, but nothing was done with this information. The younger children were bored and frustrated at the lack of structure to their day and the older children were concerned about missing out so many months of the syllabus.

The children in grade 11 and 12 may have to repeat the year after missing 2 months of schooling.

As for the longer term, most people feel that another xenophobic attack happen again, but after a shorter period of time. To them it is not a case of if, but when. They still feel vulnerable, but are short on choices. They are “choosing to” integrate back into the community, but there are no other options for them and this concerns them.