MSF first established a mission in Bangladesh in 1985 and has had a continuous presence in the country since 1992. Before August 2017, MSF had one project in Kutupalong in Cox’s Bazar and one in Kamrangirchar, a slum area of the capital, Dhaka. After more than 700,000 Rohingya refugees fled violence in Myanmar from August 2017, MSF launched additional emergency projects.

More than 919,000 Rohingya refugees are now living in Cox’s Bazar district. They live in small bamboo and plastic sheeting shelters on uneven terrain, in severely overcrowded makeshift camps. Relocations during the monsoon season, to additional land provided by the government, have prioritised families at immediate risk of landslides and flooding, with limited progress on reducing overcrowding. More, suitable land is needed.

Hilly terrain also complicates access to services, particularly for pregnant women, older people and people living with disabilities. Overcrowding, inhospitable terrain, long distances, and concerns over safety, have a disproportional impact on women’s and girls’ ability to access services. Young, unmarried women, in particular, are often discouraged from moving beyond their immediate neighbourhoods.

Access to water, sanitation and hygiene and other infrastructure is limited. Monsoon season, although milder than expected, brought intense rains that caused flooding and landslides in the camps and local communities and led to injuries, deaths and damage to infrastructure, including latrines. Cyclone season is now approaching.

The vast majority of Rohingya refugees, including all new arrivals, do not have refugee status. They also do not have access to education and other services. Their movements outside the camps are restricted, which hampers access to services, including healthcare, and they are not able to work.

Over 13,000 people were registered by UNHCR as new arrivals so far in 2018. This number includes people who have also been forced out or asked to leave their homes within the host community and move to refugee camps. Those arriving from Myanmar tell MSF teams of continuing violence, harassment, detention and coerced registration as “non-citizens”. Border controls on both sides of the border have reportedly been intensified making it more difficult for refugees to reach Bangladesh.

Bangladesh plans to start relocating Rohingya refugees to a remote island in the Bay of Bengal called Bhasan Char. It is intended eventually to house 100,000 people, beginning with 50 to 60 families who may be relocated as early as October. This small island, however, only emerged from the sea in 2006 and there are serious concerns that it could be vulnerable to extreme weather. There are also concerns that Rohingya refugees will not be able to leave the island even for medical treatment.

Refugees report concerns about some violent attacks in the camps, including abductions and kidnappings. MSF teams hear stories from patients, and Rohingya volunteers report fearing for their safety. In response, many camp authorities have now introduced curfews and law enforcement patrols have been increased, particularly at night. MSF is concerned that the limitations on movement as a result of curfews may prevent patients from accessing emergency healthcare during the night.

Possible Reduction in Activities of By Organisations

MSF is concerned that other organisations working in the camps may begin to reduce their activities because they have not received funding. While some consolidation of activities is necessary to avoid overlap, including for MSF, any significant reduction in activities of other organisations in the near future risks leaving serious gaps and potentially overwhelming MSF’s existing capacity to provide medical care.

Cyclone season will begin in October. Bangladesh experiences regular cyclones. Emergency measures like evacuation plans and cyclone shelters, however, are not available to refugees. MSF and other organisation are preparing to respond but most buildings in the camps, including medical facilities, are impermanent structures made of bamboo and plastic sheeting, so any cyclone activity is likely to cause serious damage. Cyclones also bring heavy rains that could cause further flooding and landslides.

Uncertainty about the Future

The uncertainty about their future remains a major concern for refugees and continues to affect their health. Any return of the refugees to Myanmar must be voluntary, safe and dignified. MSF continues to calls on governments able to influence Myanmar, to press for violence and discrimination against Rohingya to stop, for refugees to be able to return to their place of origin, and for restrictions to freedom of movement for Rohingyas remaining in Myanmar to be lifted and access for humanitarian organizations. In the meantime Rohingyas in Bangladesh should be granted refugee status or other legal status and have access to services.

Still No Longer-Term Solutions in the Camps

There is a need for longer-term planning to secure a safer and sustainable living environment for the Rohingya refugees. This includes continued international support. Camp level planning must bring infrastructure up to minimum standards. The extent and the urgency of the humanitarian crisis and the real risks need to be widely appreciated. 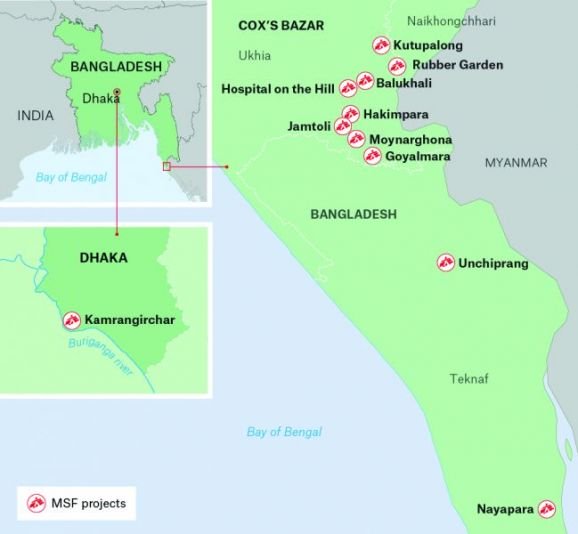 There are concerns about whether there are currently enough inpatient beds to meet the needs of the Rohingya and Bangladeshi population in the area. MSF is one of the main actors providing hospitalization for paediatric, neonatal and adult patients. Non-communicable diseases (NCDs) also remain a serious unmet need. Surgical capacity is an area of concern as surgical facilities within the camps are limited and these may also be reduced over time. Both international and national actors need more support, including funding, to scale up secondary and surgical care.

MSF has so far also been able to refer patients from both the host and Rohingya communities to facilities in Cox’s Bazar. This may become more difficult if movement restrictions on Rohingya patients increase.

MSF is working with the Government of Bangladesh to expand routine immunisation (vaccinations) for Rohingya refugees. Currently vaccinations are available up to one year old. We hope that this will eventually be expanded to all children under 5 years to address historically low vaccination coverage among the Rohingya, as a result of limited access to healthcare in Myanmar, and to prevent communicable diseases.

Only a small proportion of the population currently has access to specialized mental health services, like those provided at MSF facilities. The traumatic experiences that forced them to flee Myanmar, the hazardous journey, the daily stresses of camp life and uncertainty over their future all negatively affect their mental health. Refugees experience flashbacks, generalised anxiety, panic attacks, recurring nightmares and insomnia, as well as illnesses such as post-traumatic stress disorder and major depression. MSF is also seeing chronic mental health difficulties and psychiatric needs within both the host and refugee communities.

Progress has been made in putting in place sexual and gender-based violence (SGBV) prevention, mitigation and response mechanisms, but coverage and service delivery remains patchy. MSF teams continue to provide support and treatment to survivors of sexual violence at our health facilities. Since August 2017, MSF has treated more than 600 survivors. Survivors report experiencing sexual violence both in Myanmar and in the camps. MSF’s services include psychosocial care, treatment for sexually-transmitted infections (STIs) and menstrual regulation (Bangladeshi medical term for termination of unplanned pregnancies). Post-exposure prophylaxis is also provided in the cases where it is possible.

Given the scale of the water and sanitation needs, MSF’s water and sanitation response has shifted to focus on larger projects to distribute clean, treated water, and the management of waste from latrines. Maintenance of existing facilities, chlorination points and distribution of aquafilters also continues.

While the distribution of aquafilters to patients leaving the hospital and identified vulnerable households continue, other activities will gradually be phased out as MSF focuses on the development of water distribution systems. Several systems are already in operation. One of the systems under construction is a solar-powered water networks to bring clean, chlorinated water to 81,000 refugees.

MSF teams are providing a wide range of health services for Rohingya refugees living in formal and informal camps, as well as for the local host population around our facilities.

The four hospital-level facilities offer a range of services including:

Goyalmara Mother and Child Hospital and Kutupalong IPDs are located just outside of the camps and serve both camp and host populations. 40% of patients at Goyalmara are from the host community.

Rubber Garden outbreak response centre was, until recently, used as a diphtheria treatment centre, as well as treating acute watery diarrhoea (AWD). Over the past two months, the number of diphtheria patients has dropped to just two or three per day. It is no longer considered necessary to maintain a separate diphtheria centre. Patients will be treated in isolation areas of MSF hospitals. AWD patients have also been referred. Rubber Garden will be reactivated in the case of an outbreak.

These PHCs are outpatient facilities that provide primary healthcare, as well as 24-hour emergency and ambulance referral, mental health and SGBV services. Each PHC sees 200 to 300 patients a day.

Medical teams at Hakimpara, Jamtoli and Moynarghona PHCs are currently revising protocol in order to focus on constantly improving the quality of care. MSF teams are also working with local communities and health facilities to improve outbreak readiness and infection prevention and control.

Unchiprang PHC was damaged by strong winds earlier in the year but has now been repaired. At Nayapara PHC, construction has begun on a maternity facility. Nayapara PHC will also start a mobile clinic programme from October, to bring healthcare closer to where people live.

The mobile clinic that was providing screening, consultations and referral at Sabrang entry point, where many refugees arrived last year, is on standby as very few people are arriving at this point. An MSF social worker continues to monitor the situation and the mobile clinic can be reactivated quickly if needed.

As mentioned above Rubber Garden outbreak response centre is now an emergency facility that can be activated in case of an outbreak of a communicable disease like cholera or diphtheria. It has a capacity of 100 beds. It is one of the few dedicated facilities that would be available in the case of an outbreak, as finding space to implement isolation and treatment activities in the Kutupalong-Balukhali mega-camp is extremely challenging.

In Cox’s Bazar town, MSF is starting construction at Sadar Hospital, one of the main hospitals in the town. MSF is building a brand new waste management area for the hospital as part of a project to support the hospital to improved infection prevention and control. The hospital serves both host and Rohingya populations. In addition, MSF is supporting mental health services at Ukhiya Upazila Health Complex in Ukhiya town, near the largest of the refugee camps. In August, MSF also donated and installed an x-ray machine at the Teknaf Upazila Health Complex and provided staff training.

5.Other Projects in Bangladesh