Palestinian man stands on the street of Gaza city after the night of heavy aerial bombardment. 11 days of Israel’s intense aerial and ground bombardments has caused a huge impact on people’s lives in Gaza - people lost their family members, their homes and livelihoods and have suffered long-lasting physical and psychological injuries. May 2021
© Fady Hanona
Share This

From 10th to 21st of May 2021, Israeli airstrikes and shelling on the Gaza Strip killed 256 people, including 66 children. Around 2,000 Palestinians were injured during the bombing, including over 600 children and 400 women, some of whom sustained injuries resulting in long-term disability such as loss of limbs or eyesight.

In Israel, there were 13 deaths and 700 injuries as a result of rockets fired from the Gaza Strip. On May 21st, 2021, an Egyptian-brokered ceasefire came into effect and the bombings stopped.

Even prior to last year’s bombings, most Palestinians in Gaza had already experienced the trauma of war, most notably in 2014 and during the Great March of Return in 2018. This trauma – of fearing for your life, of seeing your home in ruins, and of daily economic hardship – has been compounded by events in May 2021. The mental health crisis in Gaza is now even more acute.

Gaza 'strip, Great march of return on the 11th of may 2018. Palestinians protestor are burning tires, them in order to hide the view to the israeli snipers.Tensions are high along the Gaza-Israel border following more than a month of weekly mass protests near the fence that has left 50 Palestinian protesters killed and over 1,700 wounded by Israeli army fire.
© Laurence Geai

Of the two million Palestinians living in Gaza, over 40 percent are children aged 14 or under. These children have lived their entire lives under Israeli blockade, survived three major offensives by Israel and experience repetitive and ongoing trauma. One year since the latest round of bombing, Palestinians in the Gaza Strip feel more unsafe than ever.

These three testimonies, two from MSF patients and one from an MSF staff member, demonstrate the lifelong impact of last year’s hostilities, whether through physical injury or mental trauma.

I was injured on the first day of the bombings. I was at home when the house was hit. We didn’t know if it was a bomb or if something in the house had exploded. We just heard a massive noise and the house trembled. That’s when I saw my hand hanging from my arm. The whole family was together, it was Ramadan. Part of the house was destroyed, two of my cousins died, and another relative was left disabled.

The blast was so strong that the neighbours were also injured. The neighbour’s son was walking outside and lost both of his eyes. He was only 9 years old, and he will never be able to see again. He was just playing outside.

Destruction in Gaza city where Israeli airstrikes killed hundreds since 10 May 2021.
© Fady Hanona

People were trying to put the victims in cars. Ambulances could not reach us, as the bombs were just falling everywhere. I was in a car with 4 other victims. One of them was another neighbour’s child. She died on her father’s lap, right next to me, on the way to the hospital. The rest of us didn’t know if we would make it to the hospital alive, everything was being bombed all around us.

I finally reached Al Shifa hospital and after a week I was referred to MSF in Al Awda hospital. In both hospitals, they feared the bombs were going to hit us. Even hospitals were not safe this time.

I had 8 different surgeries and my hand was amputated. While I was at the hospital, I was fearing for my family. Their mental health was deeply affected, and loud noises still make my younger two cry. My mother was the one that suffered the most. She had a nervous breakdown, and she is now being cared for by mental health specialists. She still can’t talk about it without going into a panic attack.

What hurts the most is that I can’t provide to my family. I was a driver, and I can’t drive without my hand. I was responsible not only for my wife and kids but also for my elderly parents.

I was supposed to receive a prosthetic hand, but due to the blockade, I have no idea when that is going to happen.

Sometimes I ask myself why I survived. Sometimes I wish I had died with the others, so I could finally leave Gaza. Death is the only way out. Ahmad*
Share

It was the first day of the bombings. I was outside my house with my son when a missile hit the car, less than a meter from us. I don’t remember exactly the order of things, but then I saw my legs were completely injured. When I looked to the side, my boy was not awake.

His abdomen was open, and both his hands were gone.

I started to scream.

My wife and my two daughters were in the house and came running. They were also screaming. There were so many people injured around us and no ambulance's insight.

The neighbours were taking the dead and injured in their cars, rushing to the hospital. My son went first in a car, but I think he was already dead by then.

There was no space for me in that car. I was carried to another one, with three other severely injured people. I had to go in the trunk with my legs hanging out. The road to the hospital was like seeing hell on earth. Everywhere we looked was destroyed, fires all over the place, and bombs kept dropping from the sky. Half of Gaza was bombed.

Gaza, One year after the bloodiest day

It was not like any other war I’ve seen before. They were targeting civilians, there was nowhere to run. Flames were everywhere.

After that, my family was completely destroyed. My wife left me; she had a mental breakdown from which she never recovered. She blamed me for the death of our only son. Only one of my daughters stayed with me and now she is always standing with me, next to my hospital bed.

It’s one year now and I’m still trapped in a hospital bed. I’ve been through so many surgeries and interventions that I lost count. I think I might have broken the record of a number of surgeries – (he says with a smile). I’m smiling because there is nothing else I can do, I need to smile.

Gaza, in May 14th, 2018, Demonstration against the opening of the embassy in Jerusalem in Gaza, in the zone of Malaka. 52 Palestinians were killed and approximately 2410 wounded persons are to regret.

Palestinian man stands on the street of Gaza city after the night of heavy aerial bombardment. 11 days of Israel’s intense aerial and ground bombardments has caused a huge impact on people’s lives in Gaza - people lost their family members, their homes and livelihoods and have suffered long-lasting physical and psychological injuries. May 2021

MSF surgical team at Shifa Hospital in Gaza City: Surgeon Fabio Nicoliwith Palestinian plastic surgeon, Dr. Merhard try to repair the nerve damage on Izzadine Radi,23, at Shifa Hospital on June 7,2018. Izzadine was shot in the leg by an Israeli sniper on May 14th.

Destruction in Gaza city where Israeli airstrikes killed hundreds since 10 May 2021.

Children run on a street of Gaza city. Of the 2 million Palestinians living in Gaza, over 40 per cent are children aged 14 or under. These children have lived their entire lives under Israeli blockade, survived four major offensives by Israel and experience repetitive and ongoing trauma.

Gaza 'strip, Great march of return on the 11th of may 2018. A woman with a palestinian flag, is standing up in front of the fence between Gaza'strip and Israel.Tensions are high along the Gaza-Israel border following more than a month of weekly mass protests near the fence that has left 50 Palestinian protesters killed and over 1,700 wounded by Israeli army fire. 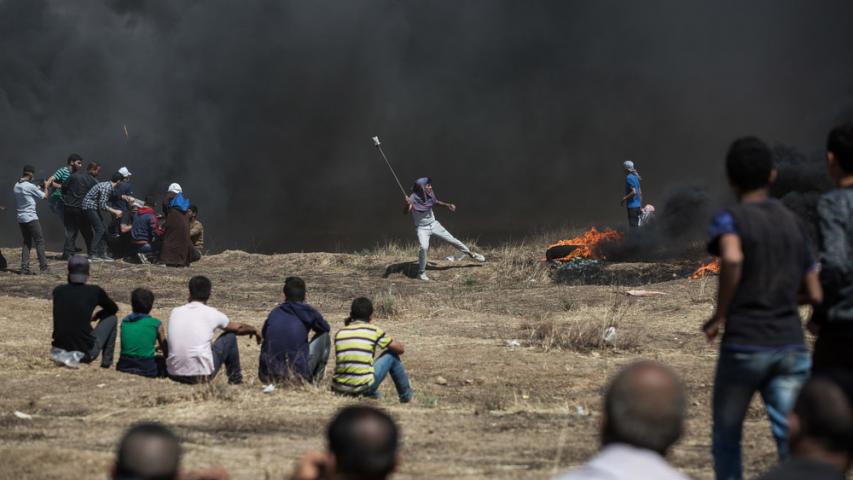 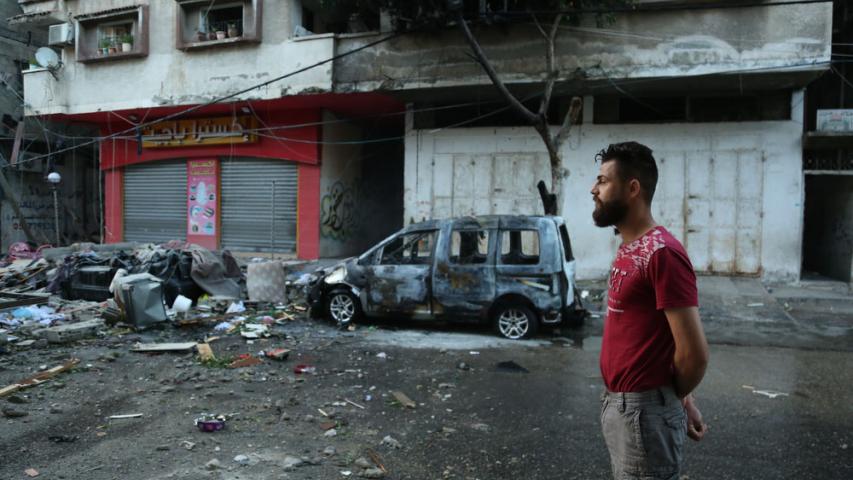 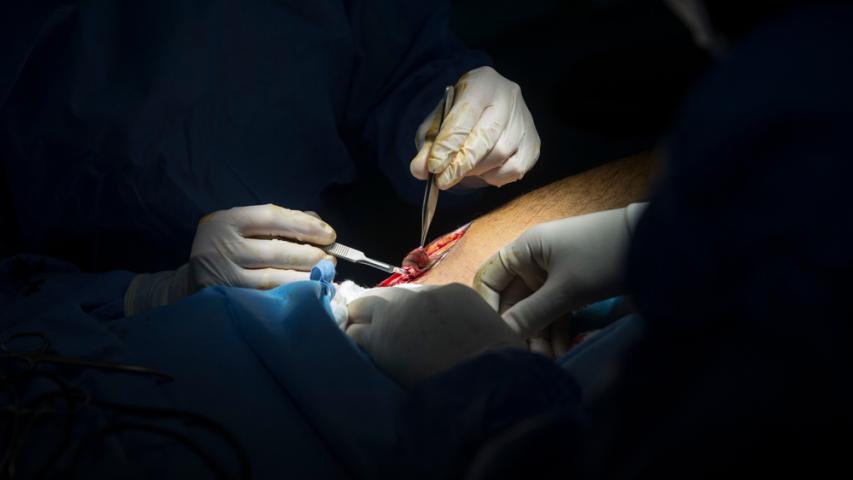 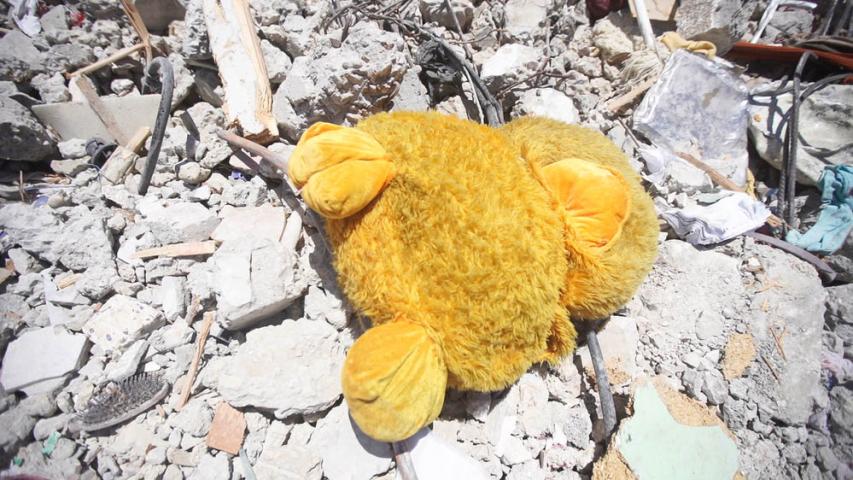 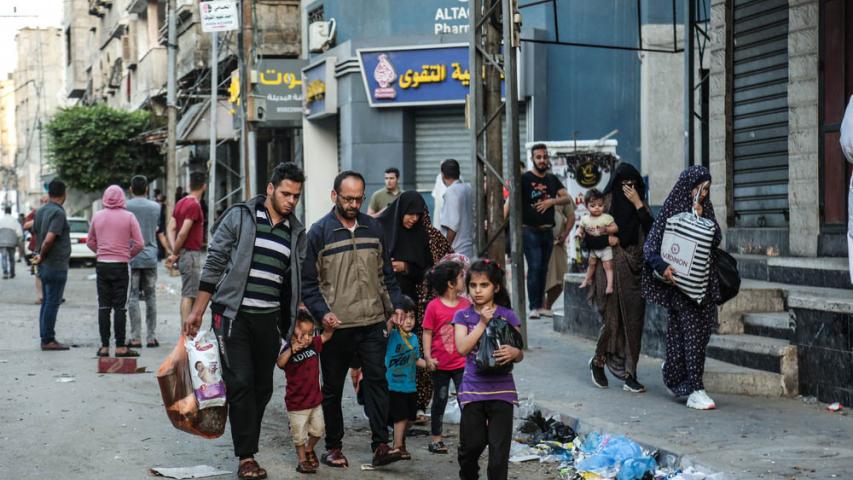 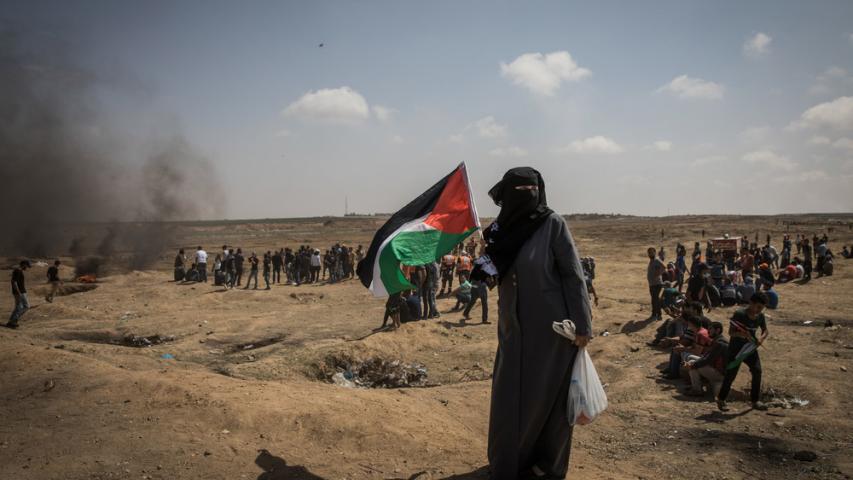 May 2021 was the first time I witnessed an aggression while having a family of my own: a wife and two kids. The bombs had never been this close to us. My kids were scared and screaming. Nothing we said could calm them down. I tried lying to them, saying it was fireworks, but my daughter could tell I wasn’t speaking the truth; she said fireworks were never that loud and they had pretty lights; these ones were too loud and all she could see was fire around our building.

I think my biggest fear was of losing my family. Both me and my wife are health workers and we needed to take turns to go to the hospital and stay with the kids. While at the hospital, I was constantly worried that my phone was going to ring, and someone would tell me that my family was dead.

MSF ambulances couldn’t move. We had to get a ride with colleagues with no assurance that we would arrive safely to the hospital.

They were targeting everything. Not even the hospital was safe.

The intensity of the bomb was also something I’ve never seen in previous aggressions. It was a rain of missiles, a pouring rain. Bombs every second, everywhere. Ashraf*
Share

The intensity of the bomb was also something I’ve never seen in previous aggressions. It was a rain of missiles, a pouring rain. Bombs every second, everywhere. Gaza seemed to be completely on fire. On the way to the hospital, we could see the buildings in the middle of the city completely destroyed and the bodies on the streets. A lot of these buildings had many families.

At the hospitals, crowds and crowds arrived with many different wounds. Once again, we were overwhelmed by the mass casualties Israel inflicted on Gaza.

There was not enough blood for transfusions, we didn’t have enough ICU capacity. We just could not treat that number of people at the same time. We were just aiming to save as many lives as we could on the spot. Sepsis was everywhere, potential COVID transmissions and other communicable diseases.

It was shorter than previous aggressions but way more intense. Nothing we learned from previous escalations helped us this time. We were all just waiting for our turn to die. Before, we had breaks from the bombings and humanitarian corridors. This time, there was nothing, nowhere to run to, nowhere to be safe.

My daughter used to love to go to the beach. Before May 2021, she asked to go every day. In May 2021, however, we could see the shore being bombed from our window. It took her months to ask me again to take her to the beach.

She is only 3 years old, and she can already tell the different sounds of explosions, fireworks and missiles. That’s their childhood; it’s not a healthy childhood. God knows what kind of trauma they will carry throughout their lives.

Burkina Faso: “In Djibo, civilians are paying the price of a seven-year-long crisis”