Conditions of protection: life inside or outside a displacement camp

During some of the most extreme periods of violence, the UN opened its gates to civilians and these bases transitioned into Protection of Civilians (PoC) sites in South Sudan.

The smell of sweet ginger coffee being prepared in a little tin hut manages to waft above the putrid smell of green sludge - it’s the smell of life going on. It lingers in the air, and somehow, just like the people here, manages to rise above the suffocating conditions of a Protection of Civilians site.

Since 2013, four million people have been displaced by conflict in South Sudan. Two million sought safety across borders, while another two million remain internally displaced.

During some of the most extreme periods of violence, thousands of people fled in unprecedented numbers to existing United Nations (UN) bases for protection, and as the conflict extended, these bases transitioned into Protection of Civilians (PoC) sites and are guarded by forces from the UN Mission in South Sudan (UNMISS). 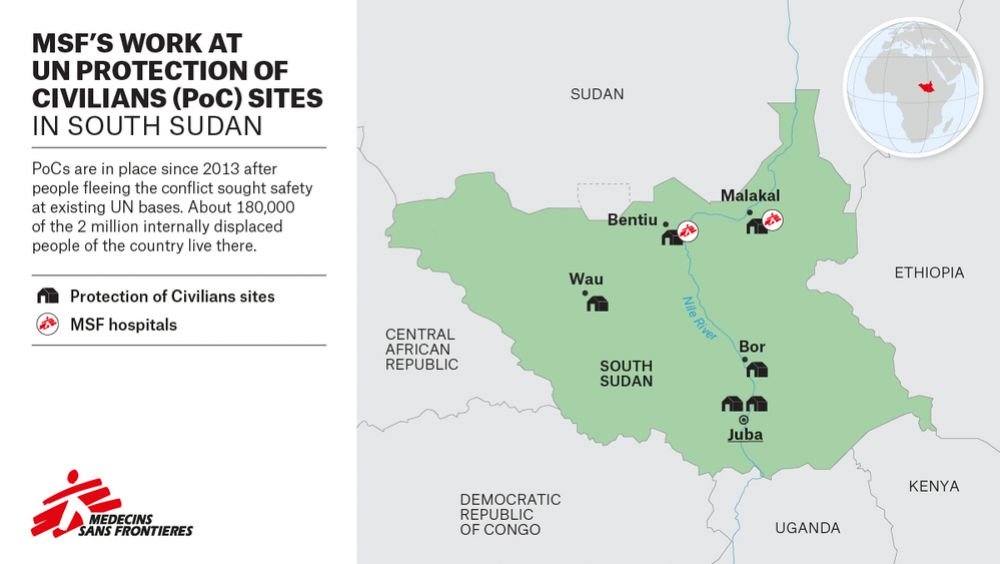 Since the signing of an agreement between warring parties last September, discussions on the return of displaced people and the future of the PoC sites are emerging.

Currently, around 180,000 people are seeking safety in six of these camps in South Sudan. Doctors Without Borders (MSF) is present in two - Bentiu and Malakal.  Despite the challenging conditions within, for many, the alternative of being outside is worse.

“When my village was attacked, many people were separated and children even ran with different families wherever they were. Everyone was scattered or killed. When we got here, we were only hearing things like ‘this one was killed, this one is here, or this one is looking for you’”, says Teresa from Mayendit, a mother of three at Bentiu PoC.

Across from Teresa, two plastic chairs have been occupied and music is blaring from a speaker tied up to the chicken wire. The speaker breathes rhythm into the camp, falling on teenage ears that are maybe listening for hope, love, or most likely - distraction.

In Bentiu PoC, for more than 100,000 people living here, the challenges are many; safety, food, water, health and shelter.

“Gatherings of big populations in one place is not good in terms of health. People are not housed properly. The way they construct the houses is by putting five shelters together without being separated. If a person in shelter 1 is infected by TB and does not know his symptoms, we fear this guy will infect all five shelters. Without shelters being separated, there is a greater risk of being contaminated,” says Peter, a father of five now living in the PoC for five years, despite coming from neighbouring Rubkona.

MSF has repeatedly called for conditions and services within the sites to be improved beyond current levels, in particular, water and sanitation (WASH). Overflow from latrines oozes down banks into a stagnant thick sludge, patiently awaiting a young child to investigate and play.

The little ones do as children do, but in this environment, instead of just playing catch with your friends, you risk catching a disease and unnecessarily become a part of the alarming statistics of the place.

Almost half of all patients seen in the outpatient department or admitted to MSF’s 160-bed hospital in Bentiu PoC are children under five, many suffer from illnesses like severe acute diarrhoea, skin diseases, eye infections and worms, which can be avoided by improved water and sanitation.

The relative safety found within the camp comes at the expense of unnecessary exposure to life-threatening diseases and undignified living conditions, both factors which should not drive a person’s decision to return home.

Not enough of anything

In Malakal, which was the second most populated city before the war and one of the worst affected areas during it, MSF also runs a hospital inside the PoC where around 30,000 people are seeking protection. Malakal passed hands between one group to another several time.

The destruction is still visible as if new. Twisted wreckages, burnt out cars and empty neighbourhoods serve as a constant reminder of the recent past.

“We still face many challenges. One is hunger; you may have sorghum grain, but you don’t know where to grind it or you may not have money to take it to the grinding mill. Even if you have money to grind the sorghum, you may not have water to cook it. There is not enough water; the community is too big here,” says Martha*, a 27-year-old woman from east Malakal county.

These camps came into existence so that people could survive situations of violence that they would otherwise be exposed to the outside of them. More than five years on, for some people, qualifying their existence by mere survival is a depressing thought.

Throughout 2018, 51 people who had attempted suicide were admitted to the MSF hospital in Malakal PoC, marking an average of one person per week. The MSF teams provided more than 2,400 mental health consultations including in both individual and group sessions – with people’s conditions triggered by a combination of experiencing extreme levels of violence throughout the conflict, and feelings of despair that are exacerbated by, or a direct consequence of, their current environment.

“The life for everyone, but especially for women, is very difficult. These five years have affected people. They are unhappy, they lost many things when they had to flee their homes, and there have been so many deaths in the community. Some people are mentally ill and even say it would be better to kill themselves,” says Achol, a 32-year-old woman from Obai, a village south of Malakal.

Based on what we hear from our patients, temporary movement in and out of both camps is happening, but people are hesitant to relocate prematurely or definitely due to uncertainty about their safety in a context that can quickly shift.

“The most difficult moment I have faced is when I first came to the PoC. It was also very difficult when the compound was attacked and burned in 2016. My shelter and everything I had inside it, including my clothes, was destroyed,” says Achol, a woman from Obai, a village on the west bank of the Nile River, an hour south of Malakal.

Security within the sites is not absolute, with robberies, looting and sexual violence common concerns raised by residents. For those with jobs or a source of income, the risk of being attacked is even greater.

One of MSF’s drivers who has never left the camp unless in an MSF vehicle, says “There is no safety from the place where we came from. We are waiting until the situation calms before we go, but even then, there may not be services for people to be able to survive in their places of origin.”

Similarly, David, one of MSF’s health promotion staff also living in one of the PoCs says “Even me, because I have a job, we are the most targeted people in the PoC. Where can I run though? We don’t have the choice to leave, it’s still better than outside.”

Hope for the future

People’s coping mechanisms have been stretched, but despite the many challenges people are faced with within the camps, and despite feelings of uncertainty about what their future might look like outside of them, there is undeniable hope for what could be.

“If we witness it, the peace, then we can go outside. If not, better to be here, but what I want to add is that all the women from South Sudan, all the people of South Sudan, hope for peace. If there will be peace, that will be nice," says Teresa.

Until then, the rhythm of life in the camps continues; chitter-chatter, hands scrubbing, hearts praying, women fetching, children playing, all struggling, but all resilient - surviving in the most dignified way you can, in some of the most undignified conditions imaginable.

Flooding in South Sudan: A state of emergency