Health policies must focus on needs of individuals

Between 12 and 15 December, the Universal Health Coverage Forum 2017 will take place in Tokyo, Japan. This major gathering, co-hosted by the Government of Japan, the World Bank, the World Health Organisation (WHO) and others, aims to “stimulate global and country level progress towards Universal Health Coverage (UHC)”, which the world has committed to reach by 2030 as part of the Sustainable Development Goals (SDGs). Dr Mercedes Tatay, MSF’s International Medical Secretary, will attend the forum and provide a critical reality check based on Doctors Without Borders’ experience on the ground. On her way to the forum, Dr Tatay answered a few questions.

Why is MSF attending this meeting?

Through the direct provision of free medical assistance to people affected by armed conflict, epidemics, natural disasters and exclusion from healthcare in more than 60 countries,  MSF teams see first-hand the barriers that some of the poorest and most discriminated communities face to access healthcare. We want to bring this direct experience to inform international policymakers of their dreadful consequences on people’s health and lives and to advocate for non-discrimination and unhindered access to healthcare for all

As doctors and health professionals, we want to remind delegates at the forum that all their discussions should be about people. Making sure individuals have access to basic healthcare should come before any considerations for return on investment, security or national interest. It’s about saving lives and reducing the impact of diseases.

In MSF we are convinced that universal health coverage can only be achieved by removing persistent barriers like unaffordable drugs and charges for healthcare (known as ‘user fees’). 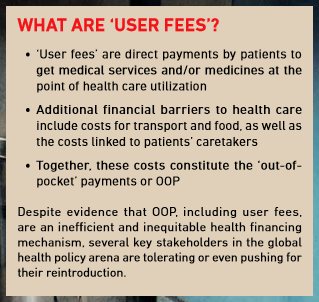 For many people it seems normal to pay for medical care: why is MSF fighting against that?

Vulnerable groups, such as pregnant women, those forced from their homes, patients with HIV, tuberculosis, malaria and non-communicable diseases in places like the Central African Republic, Democratic Republic of Congo and Guinea, still need to pay for care.  So do refugees in Jordan. This is extremely damaging; evidence proves that making people pay for medical care prevents them from receiving it. Making people pay also reduces the quality of health services, increases financial distress and delays the detection of epidemics and outbreaks; instead of coming to health centres, people get ill or die unreported in their communities.

In these places, MSF doctors and nurses see terrible stories of people who went without basic treatment because of the cost, or were told to buy their own drugs because hospitals had run out. We’ve also documented stories of patients being held captive in health facilities until they can pay for medical care they have received.
This situation persists, despite progress made in the last decade to expand healthcare for specific groups such as pregnant women, children and people with certain diseases. Worryingly, the situation could worsen further still as policies to improve access to healthcare are being reversed in many countries, including Afghanistan, Mozambique, and Malawi.

International health funding is being reduced and there is mounting pressure on countries to start paying for their own health services, often at an unrealistic pace, regardless of their actual capacity to do so. This leaves an inevitable funding gap, which some countries look to patients to fill, even though charging these ‘user fees’ is something that institutions and organisations involved in global health have committed to eliminating.

International health funding cuts now also threaten Sierra Leone’s Free Health Care Initiative for women and children. This is quite cynical for a country that lost 10 percent of its health workforce to Ebola during the 2014-15 outbreak and where access to quality health care remains a major issue.

These examples and others are developed in a new report released by MSF: “Taxing the ill: How user fees are blocking Universal Health Coverage”

Is free care an affordable option?

We realise that providing quality care comes at a cost. But when exclusion of care is so clearly linked to patient fees, it is unfair and detrimental to ask them to foot the bill. MSF has had a policy of providing care without charging patients since 2004 (before this date, there were certain places where we charged patients a nominal fee) and this has led to significant increases in the number of people using the services we offer, increasing access and having a positive impact on people’s health.

We also know that revenue generated from asking patients to pay is marginal, so people are kept away from healthcare with no real added value for the system. The end result is an increased lack of trust towards health practitioners and a high number of diseases and deaths that could have been prevented. This is obviously counterproductive and unacceptable on so many levels.

‘User fees’ also create or reinforce inefficiencies; they keep patients away from health workers, who are left sitting idle, and leave drugs to expire when they should be used to treat patients.

Affordable solutions do exist. After introducing free care to a district hospital in Lesotho in 2014, the number of women coming to deliver their baby safely increased by 49 per cent in just 18 months.  We calculated that making delivery care free across the country would add just 1 USD per inhabitant per year to the country’s health budget. This would include not only free delivery care but also provide women with transport and accommodation prior to giving birth.

Although we agree that countries with health access problems need to do all they can to respond to the health needs of their own people, what is expected from them in terms of financing is often unrealistic. They need to be able to fund health infrastructure and provide decent and regular salaries to their health staff, allowing them to do their critical work. This will also help to avoid underpaid health workers charging patients for drugs and consultations to compensate for their low wages.

To put it simply, there’s a need for financial resources to remove financial barriers for patients. To make that possible, we also ask donor and policy-making agencies like the World Bank, WHO and other global health initiatives to uphold their commitments to support free health care with funding and technical advice.  We want them to leave no doubt about the detrimental effects of asking patients to pay. We don’t expect them to tolerate the growth of ‘user fees’, as we see looming in several countries.

The globally agreed goal of Universal Health Coverage (UHC) by 2030 will remain a distant dream if people are deprived from even the most basic care because they cannot afford it.

Beyond the issue of patients paying for healthcare, are there other issues that MSF will bring to the forum?

Health system strengthening is high on the UHC agenda. We want to see a prioritisation of decent pay for frontline workers and guarantees that patients will not face stock outs of essential drugs. These are essential conditions for the provision of quality health services and which will ultimately make a difference to people who are ill or vulnerable.

We will also express our concerns about the lack of readiness to respond to large-scale epidemics. This is particularly true in places where health systems are weak and where access to health care is already an issue.  Such countries are hesitant to declare epidemics as it may lead to trade or tourism restrictions and create additional economic strains. Without guarantees that the declaration of an epidemic will come with decisive support to respond, lives will continue to be lost unnecessarily. In addition, proper emergency response and surveillance capacity needs to be built within health systems.

We are also concerned that the Global Health Security narrative – which relates to the prevention and management of major infectious disease outbreaks – is too often based on fear, relegating affected populations into a threat, rather than people in acute need. Making all of us healthier depends on making each of us healthier – it’s not one group at the expense of the other.  The health sector should maintain leadership and muster the political power to respond to epidemics. Looking back at the Ebola outbreak of 2014-2015, one could wonder if certain countries put more efforts into protecting themselves over providing meaningful support to the people of West Africa who were facing the real medical emergency.

As MSF works in many conflict settings, we will also carry a specific message on the protection of the medical mission in these places. In today’s conflicts such as Afghanistan, South Sudan, Syria and Yemen, health structures are increasingly considered as commodities that can be looted or attacked as part of military strategies with impunity. They also escape strong condemnation. We desperately need all parties involved in conflicts to unambiguously commit to respecting health structures, allowing and supporting the delivery of care to all sick and wounded people, including combatants and those designated as enemies or terrorists.