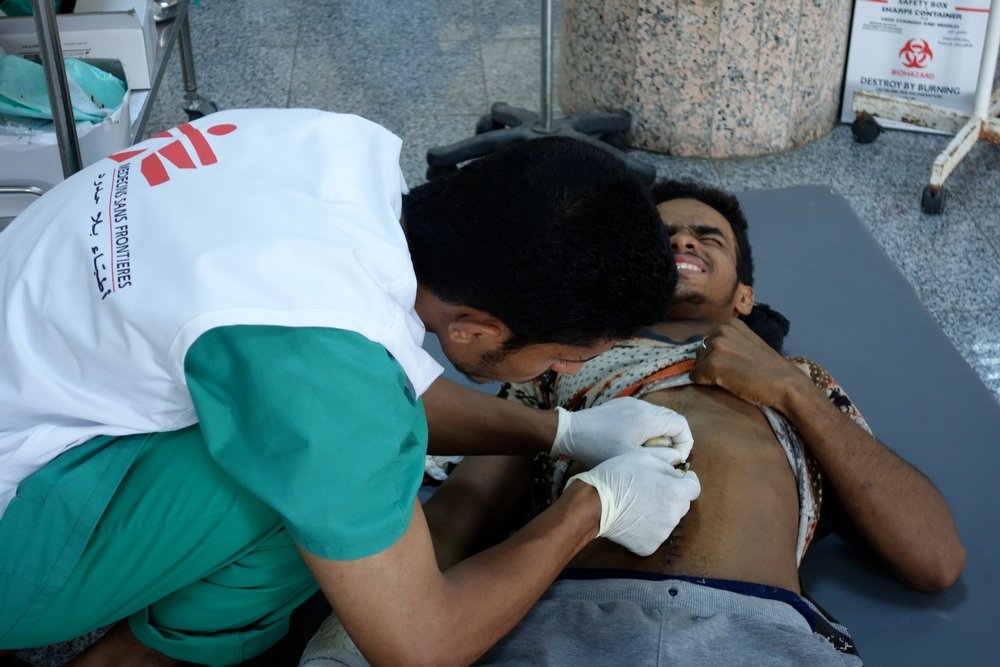 As the conflict in Yemen continues to rage, a largely under-reported humanitarian crisis is evolving, with ongoing airstrikes and heavy fighting severely hampering medical care and access to vital supplies, such as water and food for the civilian population.

MSF is critically concerned that aside from the direct consequences of the fighting, a virtual blockade of vital supplies and the targeting of civilian structures such as ports, airports, bridges and roads is resulting in unacceptable suffering and must be brought to a stop.

As hospitals struggle to source medical supplies, severe shortages of fuel mean that hospital generators and ambulances are unable to run. Water is also in dire short supply as most water in Yemen is drawn from deep wells by pumps needing diesel or electricity to run.

Civilians are also increasingly caught in the cross-fire, with airstrikes and shelling targeting densely populated residential areas. Since March 19th, MSF has treated more than 3,800 war wounded patients. Earlier this month, MSF staff received more than 100 injured people in one day after heavy shelling took place in the Al-Basateen residential area in Aden.

The following is a summary of MSF activities in Yemen.

MSF has started outpatient surgical mobile clinics in Enma, As-Sha’b and Crater and provides outpatient care to surgical patients who cannot access MSF hospital for outpatient medical care. Since the beginning of 2015, MSF has performed 2,259 surgeries. Since March 19, MSF has received more than 2,200 war wounded patients.

Amran: Since mid-May, MSF has provided more than 3400 medical consultations through mobile clinics for Internally Displaced Persons (IDPs) who have been forced to flee their homes.  MSF has also supported the provision of clean drinking water through water tanks, non-food items and hygiene kits for more than 500 IDP families located in 12 locations in Khamer. As part of this support, activities include health promotion and cleaning of sewage systems, to ensure adequate sanitation.

MSF also provided emergency and life-saving services for injured in Haradh Hospital, where 145 war wounded were treated by MSF and Ministry of Health staff.

Al-Dhale’: MSF continues to provide life-saving healthcare services and support in Al-Nasser Hospital in Al-Dhale and Al-Salam Hospital in Qataba, including in the emergency and surgical units.  . In the last month, MSF expanded its support to Al-Salam hospital with outpatient, nutrition and antenatal services.

In addition, MSF is supporting Al-Azarik Health Center, as well as referrals to Al-Nasser HospitalMSF has also provided potable water to 25,000 people through through a bore hole of Qataba town.

MSF is also supporting several health centers and Jaffea and Al-Habilain Hospitals in the governate with medical supplies and equipment. Since the beginning of 2015, MSF project in Al-Dhale’ has received 10,317 patients in the emergency room of which 490 were war-wounded.

Sa'ada: Since mid-May, MSF has been supporting the emergency, surgical and maternity departments of Al Jumhuri hospital in Sa'ada town. Of the 837 patients received in the emergency room,410 were war wounded, of which 89 required surgery. MSF is also supporting Haidan Health Center with staff, supplies and referral supportto Al-Jumhori hospital.

Taiz: Since the beginning of May 2015, MSF has provided medical staff and surgical supplies to Al-Jumhouri, Al-Thawra, Al-Rawdah and Military hospitals that have received war wounded patients due to the ongoing conflict.

MSF has set up emergency services along with medical staff in Al-Rawdah hospital to create additional capacity to treat mass casualties while continuing supporting the hospital’s emergency services with supplies and staff.  MSF is also covering the salaries of 22 hospital staff members in the emergency room to ensure 24/7 emergency care.

Between 1 to 17 June, the hospital received a total of 617 patients and 73 died. In May, 946 war wounded patients were received, while between 1 to 17 June, 617 patients including 73 fatalities. The emergency room is dressing an average of 60 wounds a day.MSF also supported Al-Thawra hospital with burn kits when nearly 200 people sustained burn wounds due to explosion of a petrol-tanker truck in Taiz city.  MSF provides hospital-to-hospital referral system with four  ambulances.

MSF is now setting up an office in Taiz to ensure continued support during this crisis period.  An MSF team is on the ground to support and carry out further needs assessments whenever necessary.

Ibb: MSF donated medical and surgical materials to Al-Thawra and Al-Qa’idah hospitals in Ibb Governorate. MSF is also considering one-off donations of food supply to centralized kitchens of IDPs who are based in 5 schools in Al-Qa’idah city in Ibb Governorate. On 01 June 2015, MSF helped Ministry of Health with evacuation of 509,800 vaccine doses meant for routine immunization, from the Governorate Health office, which is at the war front-line for relocated to Ibb cold-chain.

Sana'a: MSF has donated 500 dialysis sessions materials to the Kidney Centre in Al-Jumhori Hospital in Sana’a which will cover the registered patients for 17 days, and will support the centre for three months. MSF also donated 1000 liters of diesel to the oxygen factory to produce oxygen for Al-Thawra hospital.

​​Find out more about MSF's work in ​Yemen.