Liberia: The last patient was declared negative on 4 December. The countdown has started again and should be over 14 January.

Guinea: Guinea was declared free of Ebola on 28 December. MSF has now opened an Ebola clinic for survivors. Since March 2014 (start of the epidemic), MSF teams treated 10,376 patients in West Africa including 3,804 patients in Guinea. The authorities reported that 110 health workers died from the virus in the country.

Sierra Leone: The country was declared free of EVD transmission on 7 November. However, an Ebola-related death was reported on 15 January 2015. MSF played a key leading role in treating people who suffered from Ebola and continue to provide medical and psychosocial services to some of the country’s 4,051 Ebola survivors in Freetown and Tonkolili district. New projects on maternal and child health should open soon in different towns of the country (Kabala, Magburaka, Kenema). MSF will also maintain an emergency response capacity through a small team. 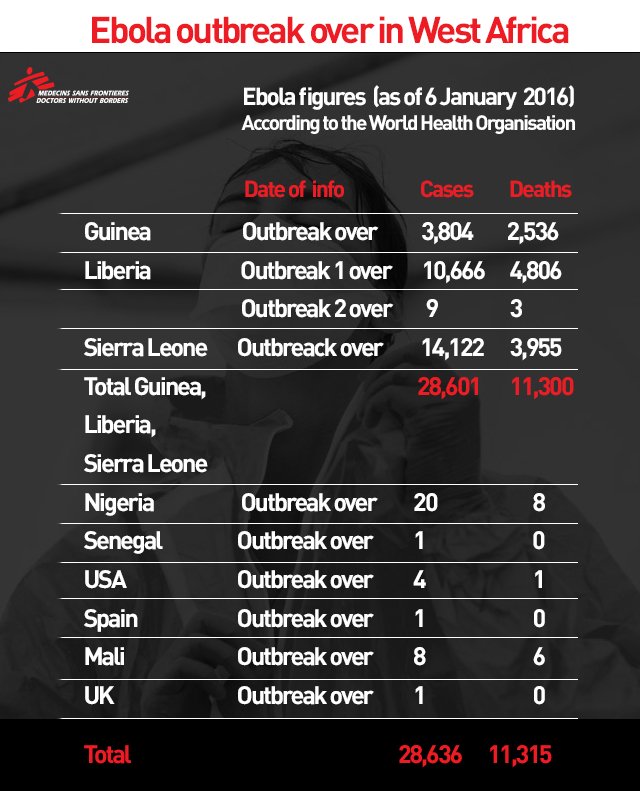 At its peak, MSF employed nearly 4,000 national staff and over 325 expatriate staff to combat the epidemic across the three countries.

Today should be a day of celebration and relief, but the world also needs to learn its lessons from this epidemic.

We must all learn from this experience to improve how we respond to future epidemics and to neglected diseases. This Ebola response was not limited by lack of international means but by a lack of political will to rapidly deploy assistance to help communities. The needs of patients and affected communities must remain at the heart of any response and outweigh political interests.
This devastating epidemic hit nearly 40 years after the first discovery of Ebola in 1976, yet the lack of research and development on Ebola meant that even today after the medical trials and at the end of the epidemic, there is no effective treatment.

From the very beginning of the epidemic, MSF responded in the worst affected countries – Guinea, Liberia and Sierra Leone - through setting up Ebola Management Centres and providing services such as psychological support, health promotion, surveillance and contact tracing. At its peak, MSF employed nearly 4,000 national staff and over 325 international staff to combat the epidemic across the three countries. MSF admitted a total of 10,376 patients to its Ebola Management Centres, of which 5,226 turned out to be confirmed Ebola cases. In total, the organization has spent over 96 million Euros on tackling the epidemic.

We have learned a lot from the past outbreak, which should allow us to provide an improved response during a future outbreak. Below are a few key points:

But there is still a lot of room for progress. Most importantly, there still is no treatment for this deadly disease, and a lot remains unknown about the virus and the disease.

A lot of data has been gathered during this outbreak, and a lot of it remains to be analysed. This analysis will be of vital importance in order to learn as much as possible about the disease before a next outbreak occurs.
We now have a promising vaccine for Ebola, but it is yet to be approved for regular administration. In order for it to be useful during a next outbreak, we must make sure that it will be accessible to those in need.

There’s no treatment for Ebola yet, but there are a few promising developments in the pipeline. In order to test these products, preparations of clinical studies of the most promising treatment products should be prepared before the next outbreak, in order to lose as little time as possible.

A sustained and well-functioning surveillance and rapid response system is essential in order to maintain zero cases of Ebola across West Africa and also to respond to cases of other diseases with epidemic potential including measles and cholera which have previously broken out in the region.

Finally, already weak public health systems have been seriously damaged by the epidemic and their recovery must be sufficiently funded and resourced.

MSF will continue its work on Ebola

MSF’s work on Ebola is not over. Ebola survivors are a particularly vulnerable group, who face continuing health challenges such as joint pain, chronic fatigue, and hearing and vision problems. They also suffer from stigmatisation in their communities and need specific and tailored care. MSF has invested in setting up five Ebola survivor clinics in Liberia, Sierra Leone and Guinea, providing a comprehensive care package, including medical, psychosocial care and protection against stigma.

Re-emergence of cases is very rare:

Evidence gathered during this epidemic shows that the virus can stay in some parts of survivors’ bodies for as long as 9 months, or longer. In Sierra Leone and Liberia, there have been some cases of transmission of the disease by survivors, as well as what seems to be relapse of the disease. But these episodes are extremely rare. Only ten cases of re-emergence have been identified out of a total of 15,000 survivors. However, it is important to maintain adequate surveillance systems in order to identify and treat such cases and avoid further transmission.

MSF’s Ebola response started in March 2014 and had included activities in the three most affected countries of Guinea, Liberia, and Sierra Leone as well as Nigeria, Mali and DRC.

Since the beginning of the epidemic:

Guinea was declared free of Ebola on 28 December. The Nongo Ebola Management Centre has been passed to the authorities but an MSF structure for Ebola survivors remains within the same compound.

Since March 2014 (start of the epidemic), MSF teams treated 10,376 patients in West Africa including 3,804 patients in Guinea. The authorities reported that 110 health workers died from the virus in the country.

According to WHO, the last cluster of cases is now understood to have been a result of the re-emergence of Ebola virus that had persisted in a previously infected individual. But the outbreak should be over 14 January.

The Liberian national health system, which was already among the weakest in the world, has been decimated by the outbreak – nearly 200 Liberian healthcare workers died from Ebola according to official statistics, which represents 8% of all health workers in the country. MSF is focusing activities on supporting the recovery of health facilities. For instance, before the epidemic, there were 220 inpatient paediatric beds in Monrovia. In April 2015, when MSF opened its paediatric hospital, all paediatric wards had closed.  At the end of 2015, 122 inpatient beds were available, including 40 in the MSF hospital. But this is clearly not enough for a city of 1.4 million inhabitants, with an estimated 17% of them being children under 5 years old.

In Monrovia, MSF is running a 74-bed paediatric hospital, the Bardnsesville Junction Hospital (BJH), including a 10-bed neonatal intensive care unit, aiming to contribute to restoring the provision of emergency and secondary health care for children in the aftermath of the Ebola outbreak. From January to end of November 2015, more than 3,100 consultations took place in the emergency room of the hospital, and 1,900 children were admitted in the inpatient ward. One-third of these admissions were due to malaria.

MSF also runs a clinic for Ebola survivors in the premises of the hospital. Former patients have to face stigma and discrimination while accessing care, as well as social and economic problems (loss of work, loss of housing, etc.). MSF provides general outpatient consultations and addresses mental health needs to a group of more than 500 identified former Ebola patients, which are estimated to be half of all survivors in Montserrado county. Teams have been providing consultations also to patients who are not identified as survivors, because of the lack of certificates of cure or discharge from Ebola Management Centres. Compared to identified survivors, their access to medical and social assistance has therefore been even poorer. Common complaints are joint pains and ophthalmic issues. For the latter, MSF guarantees referral to external specialists. About 400 survivors have been seen since April 2015, 168 are actively followed. 23 patients are under psychiatric treatment and 35 patients are currently followed for eye problems.

The outbreak was declared over on 7 November. However, an Ebola related death was reported on 15 January 2015. MSF is now focusing activities on survivor health care and surveillance in Western Area (Freetown) and Tonkolili (Magburaka). There are also plans to begin non-Ebola health activities in several districts of the country as many components of the health system need to be strengthened.

MSF is running a survivor health clinic in Magburaka town as well as a mobile clinic in the surrounding villages in Tonkolili and Bombali districts. By the end of December the team had provided support to 146 survivors for medical and mental health needs. The team as well did a two week mobile clinic to Kailahun facilitating eye exams and providing medical screening. 153 survivors were seen.

MSF has been running a survivor clinic in Freetown since February 2015 providing primary healthcare and mental health support, with around 150 patients attending up to now.

MSF is currently working to incorporate survivor health care in the national facilities in Tonkolili District. On 04 January, the team began clinical care in the maternity and paediatric wards of Magburaka Government Hospital. The program will expand to provide basic emergency obstetrics and newborn care to primary level of care.

In Kabala hospital, in Koinadugu district, MSF is preparing to open a new project with the aim of increasing access to free secondary level maternal, neonatal and paediatric care while ensuring free health care to Ebola survivors in the district and effective response to outbreaks and emergencies in the area.