Since 25 August 2017, over 706,000 Rohingya refugees have fled Myanmar, crossing the border into Cox’s Bazar district, Bangladesh, following a concerted campaign of violence by the Myanmar military against Rohingya in Rakhine State. Combined with the pre-existing Rohingya refugee population, more than 919,000 refugees are now in the Cox’s Bazar area.

MSF first established a mission in Bangladesh in 1985 and has had a continuous presence in the country since 1992. Following the most recent influx of refugees in August 2017, MSF launched additional emergency projects in Cox’s Bazar.

The rains have resulted in landslides, floods, and fires, which have led to injuries, deaths and destruction of infrastructure and facilities. Some roads have become inaccessible and require extensive repairs.

The Rohingya living in the camps remain at risk of disease outbreaks, aid disruptions and poor or complicated access to health care. Since 11 May, over 49,000 people have been affected by at least 560 incidents, including 297 landslides, which affected over 15,000 people, and 41 instances of flooding, which affected 1,300 households. The monsoon season is expected to last from June to September.

Even as the rain falls, thousands of people in the Kutupalong-Balukhali and Nayapara camps continue to be relocated due to unsustainable and dangerous conditions. In Kutupalong-Balukhali, people are moved to the western edge of the camp where there is a lack of basic services. Initially, these new locations were hastily prepared and often inadequate. Emergency shelters were sometimes located on the edge of subsiding land, water provision and sanitation were insufficient, and many health structures were not yet operational. This left thousands of people in a dire situation during some of the heaviest days of rain. Since mid-June organisations responsible for relocations have made noticeable progress on improving the new destination camps and efforts have been made to consult communities prior to moving them. In spite of ongoing relocations, tens of thousands of Rohingya in the district are directly at risk due to landslides and flooding, which can also cause overflowing toilets and the contamination of drinking water.

Overcrowding and congestion continue to be of major concern. The Kutupalong-Balukhali expansion site continues to expand to the west where the land consists of remote, hilly terrain that has been stripped of trees and vegetation. This is also a concern in Nayapara, the main refugee site in the south of the peninsula. While additional land is being prepared, not enough suitable land has been made available by the Bangladesh authorities to relocate all those who are affected away from high risk zones.

Access to safe drinking water and sanitation services is insufficient in the existing camps and in particular in new camps along the western edge of the Kutupalong-Balukhali expansion site, which increases the vulnerability of the people living there. Without adequate access to water, sanitation and hygiene, communicable disease outbreaks are likely to occur.

MSF teams have treated some injuries resulting from landslides and flooding but the main health issues continue to be related to poor living conditions, including respiratory tract infections, diarrheal diseases and skin diseases. MSF has set up several diarrhoea treatment units/centres in order to be ready to respond to a possible increase in cases of acute watery diarrhoea. There is also a focus on vaccinations as the majority of the Rohingya had extremely low immunization coverage as a result of decades of restricted access to healthcare in Myanmar. Over the past few months, cholera, diphtheria and measles vaccination campaigns have been carried out but routine vaccination levels are still relatively low. MSF provides routine vaccinations at most of our health facilities, in partnership with the local authorities.

Mental health also continues to be a health concern. The targeted violence that forced Rohingya refugees to flee their homes in Myanmar, combined with the hazardous journey and the daily stresses of life in the camps, means that many refugees experience flashbacks, generalized anxiety, panic attacks, recurring nightmares and insomnia, as well as illnesses such as post-traumatic stress disorder and major depression. We are also seeing more chronic mental health difficulties and psychiatric needs. Some of the factors that contribute to people’s distress include a lack of sufficient food, a lack of opportunities to make a living, restrictions on freedom of movement beyond the camps and fears for personal security within the camps. This is further exacerbated by insecurity concerning their future and a lack of decision-making power and control over their own lives. As well as providing mental health services to Rohingya refugees, a significant portion of MSF’s mental health activities serve local communities around the refugee settlements, ensuring that the mental health needs of the host population are also addressed. 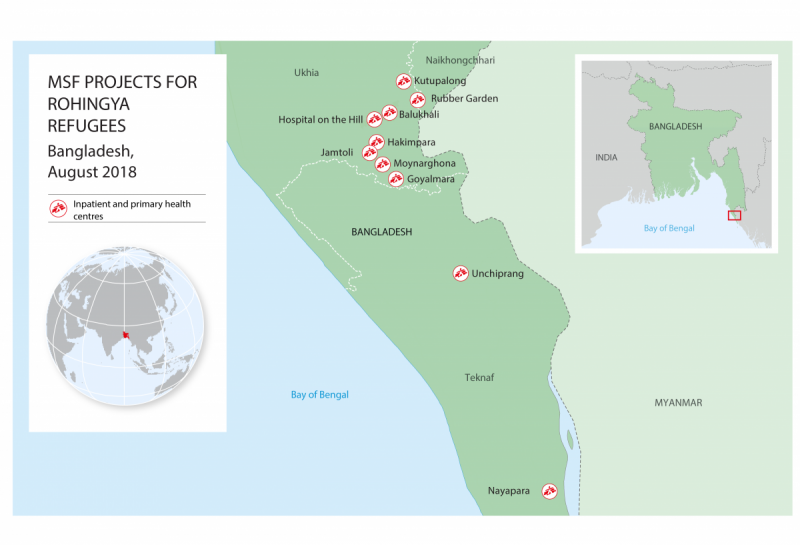 MSF teams also continue to provide services for survivors of sexual and gender-based violence (SGBV). Rates of intimate partner and domestic violence are high. Intimate partner violence is often driven by a range of factors including pre-existing gender inequalities, and exacerbated by rapidly changing gender roles triggered by displacement, additional stresses due to loss of livelihood, and isolation from community and family support systems. These factors are further intensified by trauma sustained through violent experiences. More needs to be done to ensure that protection and services specifically designed to meet their needs are available to the most vulnerable among the Rohingya refugees.

The number of Rohingya people arriving in Bangladesh from Rakhine State has steadily decreased over the past few months but those arriving tell MSF teams that incidents of violence, harassment and detention continue, as do household checks and coerced registration for the National Verification Card (NVC). As of mid-June, the UNHCR had recorded over 11,000 new arrivals in Bangladesh since the start of 2018, the majority of whom arrived during the first three months of the year.

The presence of such a huge refugee population has put immense strain on the Bangladeshi host population. Tensions are exacerbated by existing levels of poverty in Cox’s Bazar, high population density and vulnerability to natural disasters.

A group of about 4,200 Rohingya have been living in the so-called no man’s land on the border between Myanmar and Bangladesh since the end of August 2017. The Rohingya in the no man’s land report being frequently threatened and harassed by the Myanmar military, including through the use of loudspeakers. A number of incidents have taken place in the area, the latest on 28 June when a young child was shot in the leg while playing near the fence on the Myanmar side.

The monsoon season has brought landslides and flooding, which put people at increased risk of traumatic injuries. Several people have been treated for injuries related to landslides and MSF teams have seen cases of drowning, particularly among children and the elderly. Flooding also leads to greater risk of waterborne diseases, which could cause epidemic outbreaks. We continue to monitor health indicators and incidents through outbreak and surveillance systems and are prepared to respond, including setting up several diarrhoea treatment facilities.

Monsoon rains and resulting landslides and flooding have damaged and even destroyed some latrines. Some latrines have collapsed. Others have rapidly filled up and begun to overflow. MSF teams continue to monitor the situation. MSF has begun constructing a facility to safely process waste from latrines.

MSF continues to provide water to households, as well as to distribute household aqua-filters (bucket water filters). These water filters are distributed as a preventive measure in areas where outbreaks of waterborne diseases are suspected and to MSF patients when they are discharged. To date, MSF has drilled 12 productive boreholes and 362 tube wells with hand pumps. “Bucket chlorination” – providing chlorine to treat water at the point where water is collected – also continues, particularly in areas where water quality and sanitary conditions are poor and/or there is a risk of outbreaks.

The data from tests mentioned above, however, overwhelmingly supports the needs for centralized treated water supply strategy as the only way to protect water during the transit and storage phases as a key requirement to prevent outbreak. In order to support this, MSF is working to set up water distribution systems that will reach more people, including gravity-fed and other distribution systems. Two water distribution systems have been constructed and additional new projects are currently ongoing with planned completion in the next few months.

MSF teams are providing a wide range of health services for Rohingya refugees living in formal and informal camps, as well as for the local host population around our facilities.

The four hospital-level facilities offer a range of services including:

Three of these five inpatient facilities are located in the Kutupalong-Balukhali mega-camp, which is home to more than 600,000 refugees, while Goyalmara Hospital is located between the Moynarghona and Unchiprang camps. Goyalmara and Kutupalong IPDs are located outside of the camps and serve both camp and “host” populations. Balukhali hospital has a particular focus on maternal and child health. Hospital on the hill has recently introduced a programme to address non-communicable diseases such as hypertension and diabetes.

Both the Balukhali and Goyalmara facilities acted as diphtheria treatment centres, at the height of the outbreak. Diphtheria cases are now referred to MSF’s Rubber Garden facility. Rubber Garden multi-outbreak response centre is an inpatient facility specifically providing treatment in the event of an outbreak. The Rubber Garden team is also involved in active case-finding, contact tracing and follow-up.

MSF also has a project at the Sadar district hospital in Cox’s Bazar town. This 250-bed hospital is run by the Ministry of Health and Family Welfare and manages around 500 patients per day, mostly from the local community. MSF is working on upgrading infection prevention and control (IPC) facilities and systems at the hospital, including training staff and providing all materials to implement improved protocols. A new waste area and a new laundry room for high-risk linen (from surgery and maternity departments) will be constructed in the coming months and the external grey water system rehabilitated.

MSF operates four primary health centres in the refugee camps towards the south of the Cox’s Bazar peninsula.

Each of these PHCs sees between 180 and 300 patients per day. Outreach teams working with PHCs focus on health promotion, community referral for potential outbreak alert and response, while surveillance teams gather demographic, nutritional, mortality and birth indicators. 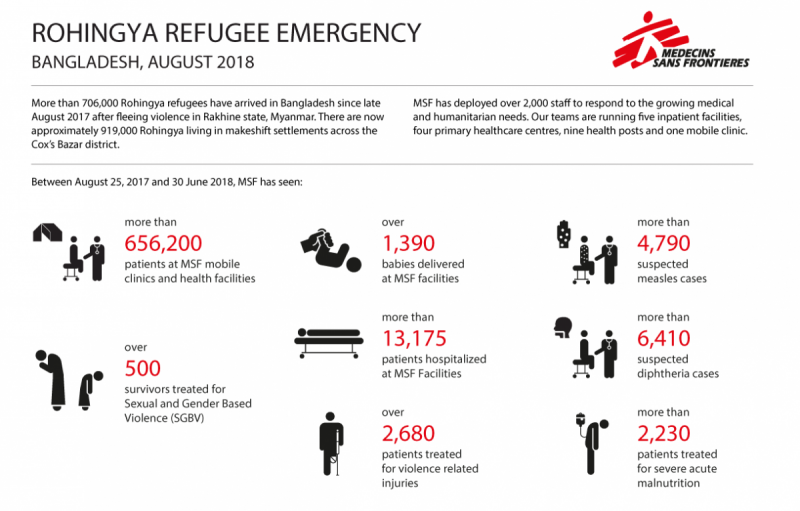 A mobile clinic has been working to provide screening, consultation and referral services to newly arrived refugees and host population around the Sabrang entry point (border crossing). As the number of new arrivals has now decreased, this mobile clinic has been put on standby. An MSF social worker continues to provide daily follow-up and to monitor the situation. The mobile service can be quickly reactivated if needed.

MSF’s projects serving Rohingya refugees and local host communities are located along a peninsula between the Bay of Bengal and the border with Myanmar, in south-eastern Bangladesh. The distance from Cox’s Bazar town to Sabrang Entry Point (border post) is approximately 100km.

One year on, Rohingya refugees live in precarious conditions, facing an uncertain future and legal limbo