In northeast Nigeria, nine years of conflict between the military and non-state armed groups have taken a heavy toll on the population, with serious humanitarian consequences. Thousands of people have been killed. Others have been deprived of access to medical care and have died of easily treatable disease such as malnutrition and malaria. According to OCHA, 1.9 million people are internally displaced in the northeastern states of Borno, Adamawa and Yobe, and 7.7 million people are in need of humanitarian assistance.1 More than 230,000 people have fled to the neighbouring countries of Niger, Chad and Cameroon.

In northeast Nigeria, services remain inadequate and there are many gaps in the humanitarian response. Security and access issues hamper the delivery of aid, and humanitarian organisations cannot provide assistance in all locations where it is needed.

Nevertheless, hundreds of thousands of people remain heavily dependent on aid for their survival. In some places, people have been stranded for nearly three years with little prospect of returning home due to the continuing conflict.

Much of the humanitarian aid is concentrated in Maiduguri, the capital of Borno state, which hosts one million internally displaced people, but services remain insufficient even there. MSF recently scaled up its activities in the town to respond to a cholera outbreak which was declared by the Ministry of Health on 5 September 2018. MSF teams are also treating an increasing number of children suffering from severe acute malnutrition, malaria and lower respiratory tract infections.

Outside Maiduguri, the ongoing conflict restricts the movements of the population and of humanitarian organisations. Most people live in towns or enclaves controlled by the military. Due to restrictions on their movements, most people are unable to farm, fish or sell their goods, leaving them dependent on humanitarian assistance. In some locations, living conditions are catastrophic. Basic amenities are overstretched, water shortages are common and sanitation is inadequate. Any disruption to the provision of assistance in these areas could have deadly implications. MSF is currently providing lifesaving medical care in permanent facilities in Gwoza, Pulka, Bama, and Ngala. Mobile teams are providing medical aid in Rann and Banki, and via mobile emergency clinics in Yobe and Adamawa.

Little is known about the needs of people living outside the enclaves. OCHA estimates that around 800,000 people live in areas that are inaccessible to humanitarian organisations. The only information that MSF has about these areas is from newly displaced people who continue to arrive – not always by choice – at towns controlled by the military.

The conflict is not over in northeast Nigeria and civilians are caught in the middle. MSF patients have reported harrowing stories of extreme violence perpetrated by all sides to the conflict.

MSF Operations in Borno State and Yobe States in 2018

Fori: In Fori, in the south of the state capital Maiduguri, MSF runs a 78-bed inpatient therapeutic feeding centre (ITFC). The centre opened in January 2017 and each month it admits 100 to 250 severely malnourished children with medical complications such as tuberculosis, cerebral malaria, acute watery diarrhoea and respiratory tract infections. Severely malnourished children without medical complication and children with moderate acute malnutrition are enrolled in MSF’s outpatient feeding programme. Between January and October 2018, more than 3,100 children were admitted to the programme, with a significant increase in patient numbers during the so-called hunger gap between July and September. 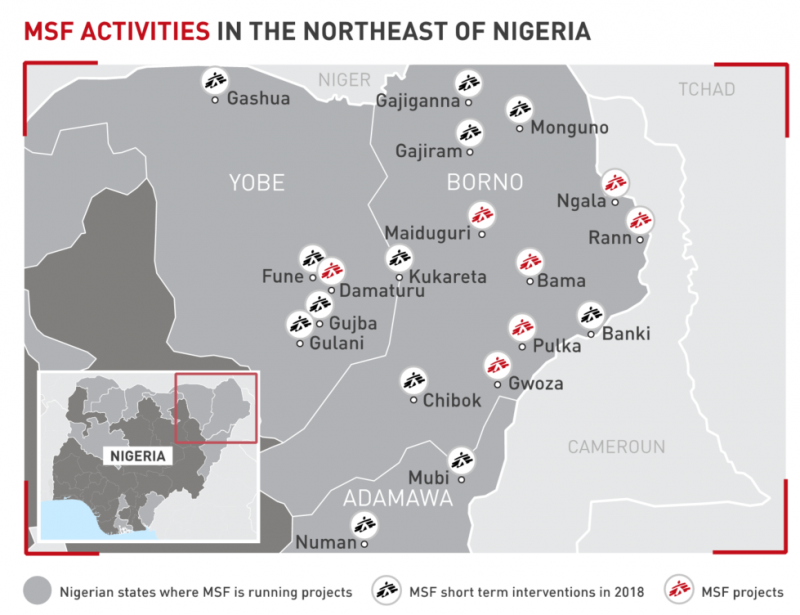 Gwange: In Gwange, MSF runs an 80-bed paediatric hospital for residents of Maiduguri and internally displaced people from across the region. The most common medical conditions are respiratory tract infections and malaria. This year, the malaria peak season saw a significant increase in admissions, and the team had to almost double the bed capacity, setting up extra tents in the hospital grounds and at times treating up to 70 patients in the intensive care unit.

Gwoza: The town of Gwoza is located 135 km southeast of Maiduguri and is completely controlled by the military. It is surrounded by mountains and the Sambisa forest, where armed groups are believed to be active. Displaced people from other areas and from neighbouring Cameroon often arrive in the town. MSF carries out nutritional and health screenings of new arrivals and provides them with mental health support. Where necessary, MSF also carries out protection activities. In the town, MSF runs a 71-bed hospital providing a wide range scale of secondary health services to the local population and displaced people. Services at the hospital include emergency care and surgery; nutritional care; inpatient care; sexual and reproductive healthcare; mental healthcare; treatment for victims of sexual and gender-based violence; and treatment for HIV/AIDS and tuberculosis.

The town of Pulka is located southeast of Maiduguri and is completely controlled by the military. It is host to more than 40,000 displaced people, some in camps, others living in the host community. People’s movements are limited to a short distance beyond the town’s perimeter to farm, but many people do not feel safe going even that far. As a result of the unplanned and large-scale movement of people returning from Cameroon, not always voluntarily, there have been severe shortages of food, water and shelter in Pulka, and some basic needs remain unmet.

MSF is also focusing on new arrivals. This includes providing them with food rations and with relief items such as jerrycans and mosquito nets; nutrition screening of children; mental health support at various transit points and camps; and protection activities where necessary.

Ngala: The town of Ngala is located near the border with Cameroon. It has been under the control of the Nigerian military since February 2015. Approximately 50,000 internally displaced people (IDPs) live in Ngala IDP camp. The military oversees the security of the camp and a token-based system allows people to leave the camp during the day.

Rann: The Nigerian Armed Forces (NAF) took over Rann in March 2016. MSF was providing medical care in Rann in January 2017 when the town was bombed, killing 90 people and injuring 150 others. The Nigerian military later claimed responsibility for the bombing, saying it was a mistake. Three staff working for an organisation subcontracted by MSF were among the dead.

On 1 March 2018, an attack on the military base opposite the MSF compound killed a number of NAF and NGO workers who were living in the compound. Three female NGO staff were abducted:  two have since been executed and one is still missing.

In Rann., MSF provides a combination of preventive and curative measures to cope with the lack of healthcare in the area. MSF is providing primary healthcare through outpatient consultations and runs an outpatient feeding programme. MSF also opened a stabilisation unit to care for the most severe patients who have no access to secondary healthcare in Rann. MSF also supports health promotion and water and sanitation activities. In November 2018, MSF responded to a cholera outbreak in Rann, implementing preventive activities in the community to contain the outbreak and treating 55 patients in its cholera unit.

Bama: The town of Bama is located 60 km from Maiduguri. It hosts some 29,000 IDPs living in a camp in addition to the resident community. MSF has been working intermittently in Bama since 2016. Its latest response started in August 2018 after an assessment revealed a critical humanitarian situation, with a lack of shelter and severe malnutrition among newly arrived displaced people. There is no functional secondary healthcare facility in the town. MSF is running a 40-bed paediatric hospital which includes an intensive therapeutic feeding centre.

Damaturu: Yobe is one of the poorest states in Nigeria. Although it is relatively stable, armed groups are known to be active in the north and south of the state. Healthcare facilities in Yobe are very basic and people have limited access to medical care and health facilities.

In November 2018, MSF supported an oral cholera vaccination campaign in Gambaru, Ngala, Gashue and Gulani, vaccinating 332,688 people against the disease.

NIMERT (Nigeria Medical Emergency Team): NIMERT was established in January 2018 to support emergencies with a focus on (but not restricted to) the northern states in Nigeria. So far, the team has supported health centres in Adamawa to respond to the ongoing conflict between herders and farmers. The team has also supported an emergency measles vaccination in Yobe state and responded to a Lassa fever outbreak by setting up an isolation ward and supporting eight health centres in Ondo state. In Bade, the team responded to a cholera outbreak, treating more than 400 patients in its cholera treatment centre and conducting a mass vaccination campaign targeting 125,000 people in the state’s most affected districts.

Seasonal malaria chemoprevention (SMC) in Banki, Maiduguri, Rann, Monguno, Gajiganna and Ngala: In 2017, MSF handed over its medical activities in Banki to Unicef, but continued to support the displaced and local population of this town with seasonal malaria chemoprevention (SMC) activities. SMC was also provided through regular projects in Maiduguri, Rann, Monguno, Gajiganna and Ngala. MSF distributed a total of 259,651 malaria prevention doses in 2018.

Find out more about the humanitarian crisis in Nigeria here.